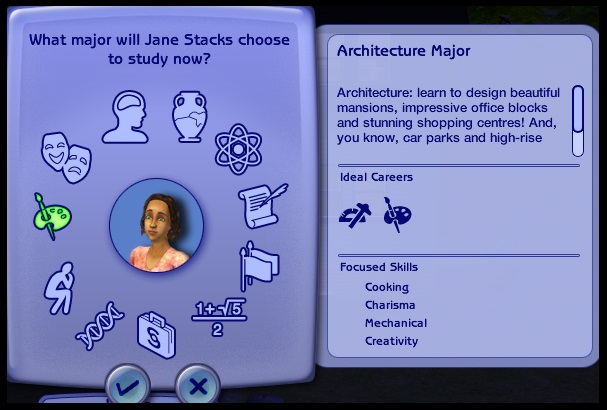 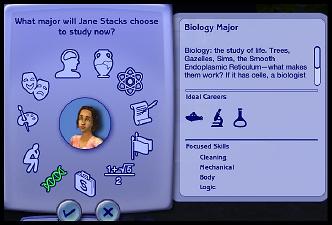 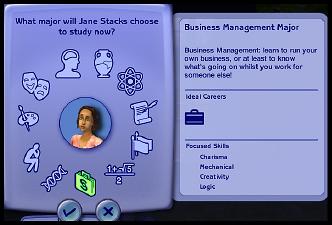 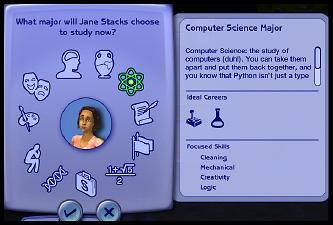 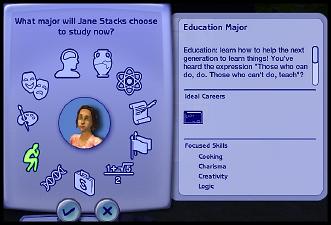 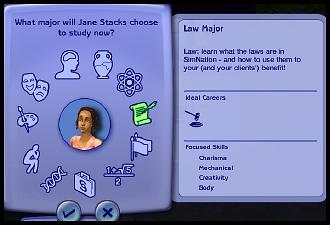 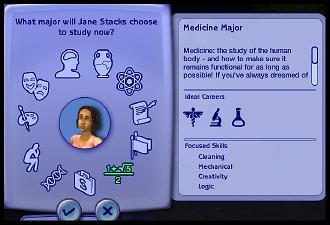 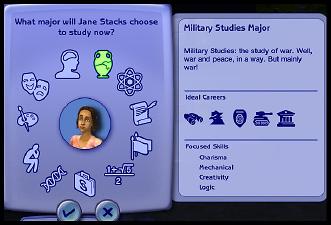 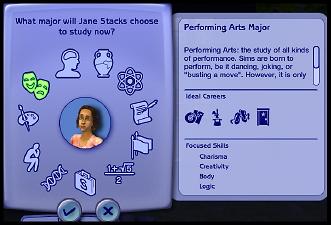 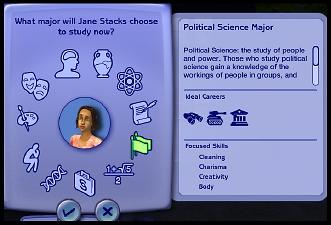 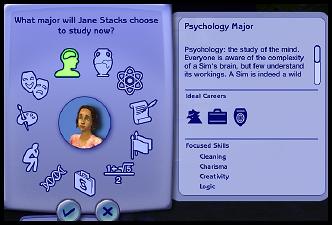 The mod that I have uploaded here changes the careers that link to each Maxis major, as shown on the major selection screen (see image below for an example). It is an edited version of Phaenoh's Uni Major Revamp mod, and as such I am uploading it with her permission. By far the majority of the work was hers, I just edited her mod to make it work with my set of default majors - and I did so by following her tutorial, which you can find here. So much gratitude to Phaenoh for a) making her mod in the first place, b) providing a tutorial to enable people to edit her mod to suit their games and c) giving me permission to upload my altered version of her mod here on Mod The Sims. Thank you Phaenoh! :-) 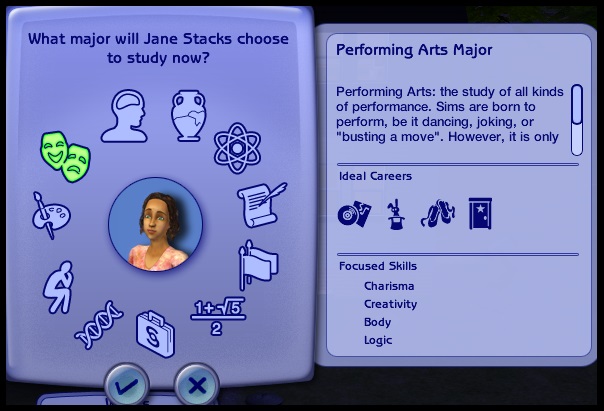 This mod changes the careers that each of the Maxis majors links to. As it is designed to be used with my default replacement majors, it will make little sense if used with the Maxis majors (but it won't break anything - the linkages will just be completely non-nonsensical!). It also edits the four careers that came with University so that they do not require a degree - if you use this mod, all Maxis/EA careers from base-game, University, Seasons and FreeTime will be available to sims without degrees. See the information below for a list of the careers that link to each (default replacement) major.


As you may have noticed, with this mod in your game some careers are no longer linked to majors at all. This is intentional - I felt that some Maxis/EA careers didn't really link to any of my default replacement majors, nor did they need to, in my opinion. Careers that are no longer linked to majors include Athletic, Culinary, Slacker and Paranormal (amongst others).

This mod is pretty much just "decorative", as specific linking plays no real role in the game - when sims accept a position in a career they receive a boost from having any degree, even if it isn't one that "links" to the career that they've started working in. It does make the major selection screen look better though, in my opinion, because the careers that each major links to actually make sense! :-) And it does stop the University careers from requiring a degree - Artist, Natural Science, Paranormal and Show Business will show up in the newspaper and online for both graduates and non-graduates, if you use this mod.

Anyway, I hope that this mod will be of use to someone! It's useful to me, which is a good start, and I wanted to share it in case anyone else wanted it to go with my set of default replacement majors. If you encounter any problems or have any questions, comments, suggestions and so on, please leave a comment! And if this mod is of use to you, please go and say thank you to Phaenoh as well, as it certainly wouldn't exist without her (and Echo, who helped Phaenoh with the original mod)! :-D


Additional Credits:
Thank you again to Phaenoh for her original mod, the tutorial that she wrote that allowed me to edit it and for giving me permission to share it. And she's also just generally awesome! :-D

Thank you to Cyjon for his Semester Changes mod - I love it! I'm not sure if any of my sims would make it through college without it :-)

Thank you to Nysha for the major creation and icon creation tutorials. You're awesome!

Thank you to the makers of SimPE, as none of the things that I create would be possible without them.

And once again thank you to the mods who organise the monthly themes - I've almost finished my creations for November's theme! :-D Only five more days to go to finish them all!
Files Need help with downloading or installing content? Click here!

If you want to edit any of my custom careers or majors FOR YOUR OWN PERSONAL USE ONLY then go ahead. But please don't upload it anywhere and/or claim that you made it yourself.