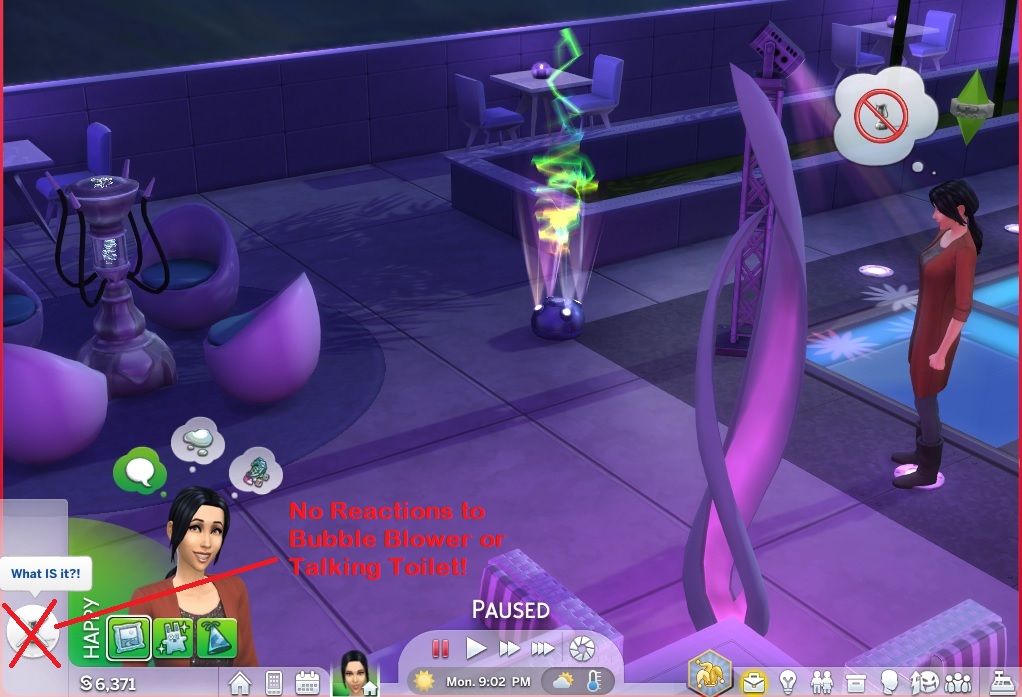 Compatible with the November 2, 2021 scenarios patch.

Improved how the mod works, now reaction interactions will not generate at all, rather than just cancelling itself out like before. Old version still works, re-download of new version optional but recommended.

This mod prevents sims from autonomously reacting to bubble blowers and talking toilets (from City Living EP). Before your sim would enter a venue, only to have your actions cancelled by the game so that your sims can say "What IS IT?!" or "Cool thing is cool" to bubble blowers or talking toilets! For me, it happens nearly every time. Well this mod now gets rid of those interactions so no sims will react to these objects, and that includes all NPCs. Gone are the days when ten sims would crowd around a bubble blower to react to it!

I don't usually use no autonomy mods as I use MC Command Center's McTuner (which lets you customize what actions are autonomous etc, essentially an all in one mod). However, even McTuner or scumbumbo's no autonomy SCAM mod were unable to stop these reactions, no matter how hard I tried. It seems like some reaction interactions are hidden and were impossible to find, therefore unable to be turned off by McTuner.

Will update if required.

You will need City Living to use this, otherwise it does nothing. Enjoy the mod!

Modified resources (other mods using these will cause conflict):

Need more information?
Back to download view
18 Comments / Replies (Who?)