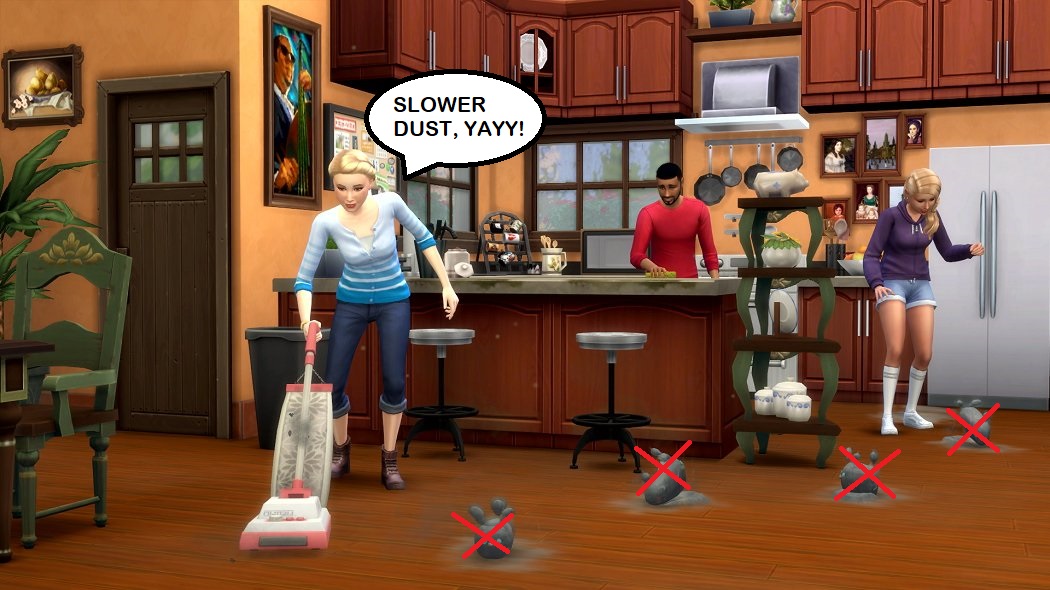 This mod does two things, which makes the Bust the Dust kit much more playable. Feel free to install only one part or both, they don't conflict

1. Tweaked Moodlets
The March 23, 2021 patch has fixed the dust problem, so now dust will gather at an acceptable level very similar to that of my mod (after testing!). Therefore, the previous package listed here is no longer needed. I have instead replaced it with a tweak of annoying buffs that Sims get when cleaning. The clean house +1 fine moodlet is no more and replaced with an invisible fine moodlet. Sims also won't get focused as much when vacuuming - they only get focused when they vacuum excessively, and even then it would only be +1 focused. Only when they go crazy with the vacuuming would Sims receive a +2 focused moodlet.

2. No dust bunnies
The idea of dust bunnies is just silly - The Sims 4 is turning into a game for toddlers! I played with them once, got bored and thought they spawn far too often and gives away way too much money (even gave me a Jungle Adventure treasure worth 10000, what?!). So if you don't want dust bunnies but still would like the dust system, this is for you.

3. One more thing:
I also grew to hate the "sparkles" you get when the house is clean, but I couldn't figure out a way to get rid of it. However Lotharihoe has managed to do it HERE.

This mod requires Bust the Dust kit to be of any use in the game.

Updates
Will be updated in the future if needed

Conflicts
No known conflicts on ModtheSims. But before this upload was approved, Zero, Lotharihoe and LittlemsSam have all made similar mods that change the dust system. So these may conflict.

Installation
To install, simply unzip the contents into My Documents/Electronic Arts/The Sims 4/Mods

Need more information?
Back to download view
38 Comments / Replies (Who?)