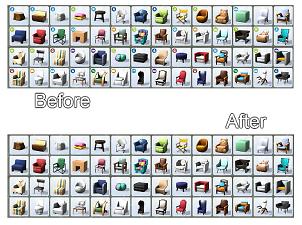 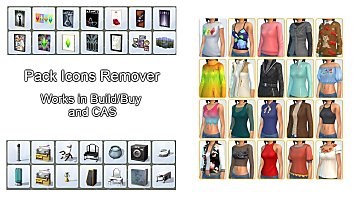 You may think "why would I need THIS mod so much tell me plx" and I'm here to answer !
Basically you'll benefit from downloading this file, unpacking it and then putting the .package file in your Mods folder if:

You have a few packs and the items with icons don't match the rest, because most of the stuff is from the base game and therefore has no icons

You have a lot of CC and it has no icon except for the wrench, but since you're here I'm assuming you also have the wrench remover

You think that all the stuff packs' icons are already indistinguishable when they're in the catalog and their resolution is 16x16, so you already stopped caring

Or maybe there's another reason that I don't know, but at this point I'm pretty sure every single player fits into one of these categories
So while you're so far let me explain what this mod does:

All in all - It's not a necessity, but if you download it you lose nothing and the game looks tidier

There's a small problem with the filter: because of the way the game works (or maybe I'm just not smart enough to fix it), filtering by pack looks the same as without the mod, but there's blank space instead of the icons. And this space doesn't just disappear, there's a gap between the buttons and the names of the packs, but that's just a minor visual bug, so it doesn't cause any harm

Conflicts
If you find any mod that changes the pack icons (but only from CAS, BB or filters), then they won't work, but the rest is safe to use

More information about modified resources:
This mod will conflict with any Mods which override DST Image resources (Group 00000000, various instances, appear in ClientDeltaBuild6, ClientDeltaBuild7 and ClientDeltaBuild8 .package files in The Sims 4 > Data > Client (not in Documents)). These resources have two versions: 1.1kB and 4.1kB both of which are needed for this mod to work. The resources with pack icons are the only resources modified by this mod, the rest can be safely modified without any conflicts.
Other Information