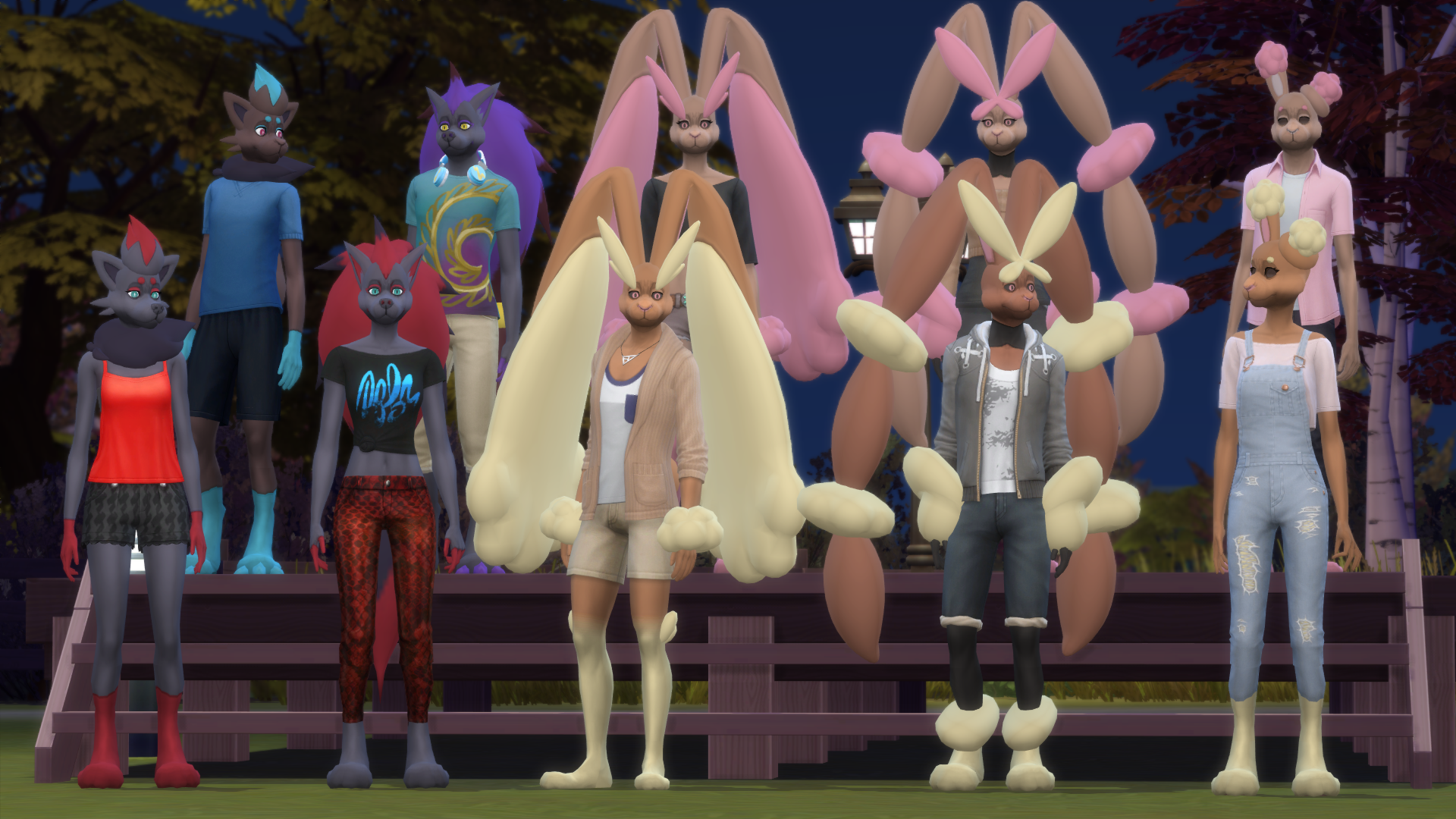 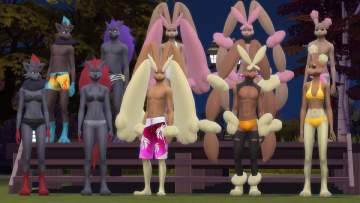 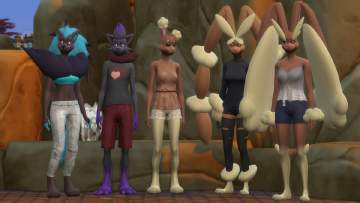 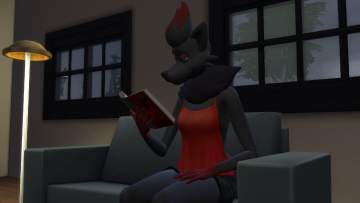 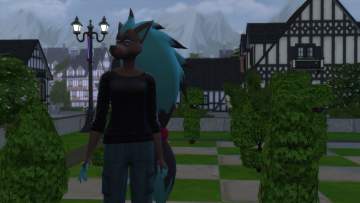 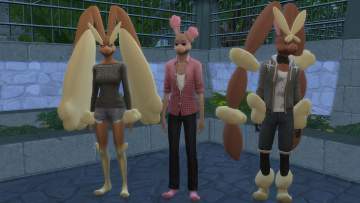 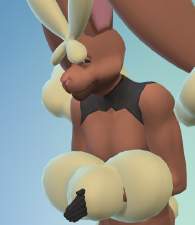 66 Thanks  Thanks     18 Favourited
Hello!
I have completed another set of Pokemon! Zoroark and Lopunny are here!

You can play as Zoroark, Zorua, Lopunny, Mega Lopunny and Buneary, all from the Pokemon franchise.

Update 1: After improving my modding skills in the past year since publishing Lucario and Leafeon, I decided to fix and improve all my mods. Here's a list of the changes in this one:

- Made Zorua and Buneary as new characters;
- Ajusted Lopunny and Mega Lopunny's tattoos to be more accurate to the original pokemon;
- Both Lopunnies now also have more detail on their ears and eyes;
- Reworked Zoroark. It now has new eyes, new improved texture and ajusted accessories;
- Zoroark's shoulder fluff is no longer dependent on other accessories;
- Zoroark's claws were also reworked and are now optional. They're located in the face details;
- New tattoos for all pokemon to resemble their evolution and pre-evolution's skin tone;
- Improved compatibily with Savestate's neck fluff and hair;
- Two new custom Egg designs for Zorua and Buneary akin to the ones in the anime;
- Organized the way my mods are ordered in CAS;
- Fixed a problem where it was impossible to select pokemon eyes on aliens;
- Made LODs to the accessories of all pokemon;
- New icons;
- Icons won't glitch out when making an opposite frame sim.

For those who are updating this mod, be sure to delete the old Pokemod folder inside of Savestate's furry mod. You may also want to delete the file localthumbcache.package in /Documents/Electronic Arts/Sims 4 if you want the icons to show up properly when making an opposite frame sim.
You might also have a problem where previously made pokemon from this mod lose all of their accessories and tattoos. If this is the case, then you'll have to go into CAS and remake them.

I'll accept any pokemon requests! You can comment right here and even if I don't respond, I promise to take note of them. I also made a list of all requested pokemon that I intend on doing (Sooner or later).

For this mod, you'll need Savestate's furry mod version 2.0 (link to it here: http://www.savestatecomic.com/dlc/ )
If this is your first time downloading one of my mods, please also download the Pokemod Savestate Addons file. (you only need to get this file once)

Here's a detailed guide on how to make them:
(This mod doesn't include any tray files. You will have to make them yourself)
(The Pokemon are fully compatible for both genders)
(Make sure not to make very overweight or very thin Sims, as they might make some of the Pokemon parts look off)
1 - Select the modded gray skin tone that comes with the furry mod (Located under the miscellaneous skin tones).
2 - Click on the eyes and select the furry mod preset.
3 - While still on the eye selection, pick one of the custom eye colors made for the Pokemon you are making.
4 - Move to the face details section and select the furry head or any of its variants.
5 - Still on the face details, change between the plantigrade or digitigrade legs
6 - Again, still on the face details, find and select the parts you need to make the pokemon you want. If you are making any of their shiny, mega forms or any other alternate version, you can find it in the different color options.
6.1 - For Zoroark, you can find his shoulder fluff in the head accessories section. (You will have to do this part for every single outfit category, but it is entirely optional).
7 - Finally, Move to the body tattoos section and pick the one for the pokemon you are making. If it's a shiny, mega form, or any other alternate version (Including their pre-evolutions Zorua and Buneary), you can find it in the different colors under the same tattoo.

Done! Now your Sim should look similar to the Pokemon of your choosing!

Here are a few comparison photos in between my mod and Pokemon Ultra Sun.

Known Issues:
(Most of these are from the furry mod and not my fault but still here's a full list)
If you don't use the modded skin tone that is included in the furry mod, the Pokemon skin will become brighter than it should be.
If the digitigrade paws are selected, some bottom clothing may have double legs.

This is a glitch with the furry mod and should be completely avoidable, make sure to pick shorter bottom clothing and not long pants.
If you use the digitigrade or plantigrade paws on your sim, then you will not be able to use any type of shoes
The furry mod has a lot of limitations when it comes to face details, you can't edit most of the face, except for the snout and the nose (Though you can make Lopunny look much more like a rabbit if you shrink the snout to the max).

In a few animations, some of the meshes might go out of place/clip. A prime example of this is Mega Lopunny's hand.

This only happens whenever the body becomes too deformed and clips out of the meshes I made.
If any other glitch happens, feel free to report it on the comments. I'll make sure to try my best at fixing it!

I hope you enjoy!

Additional Credits:
I used TwistedMexi’s T.O.O.L. mod  for some of the pictures. It's an awesome mod.
Big thanks to the people who follow my mods, for your kind words and patience.
Credits to the original creator of the furry mod Tim Weeks From Savestate Comics
Link to the website & download page of his mod: http://www.savestatecomic.com/dlc/
Also Big Thanks to Sims4Studios for the modding tools, Ohana3ds for allowing me to export the 3D models from the Pokemon games...
And of course, the Pokemon franchise for the characters.

If you like this pokemod, perhaps you'll also enjoy the other ones. You can find all of them on my Profile.