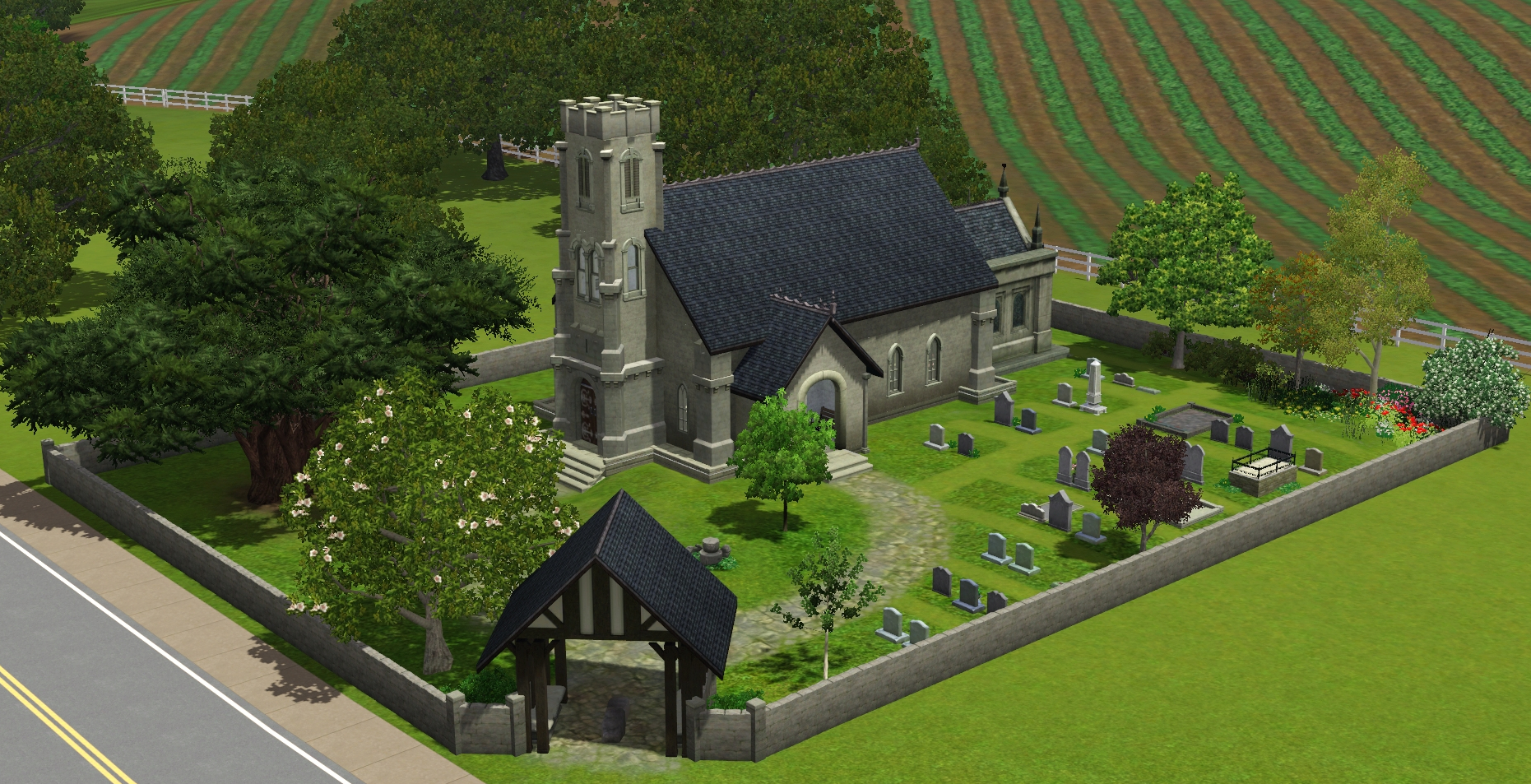 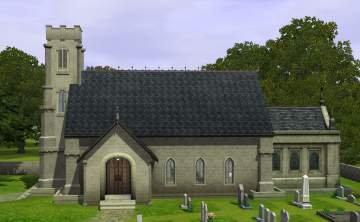 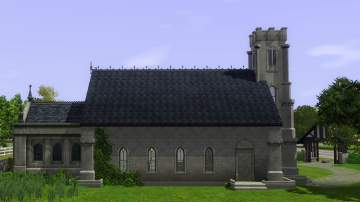 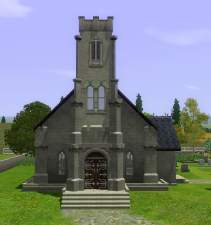 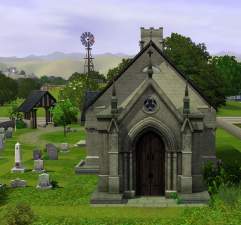 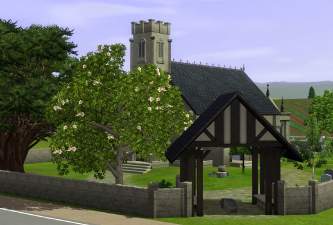 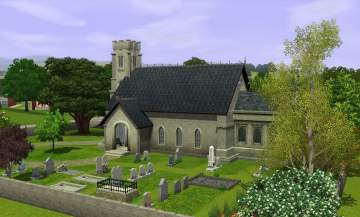 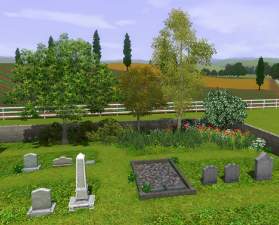 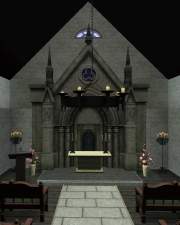 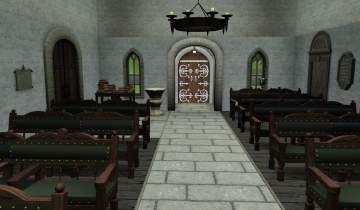 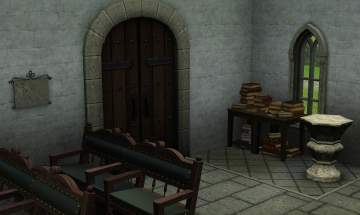 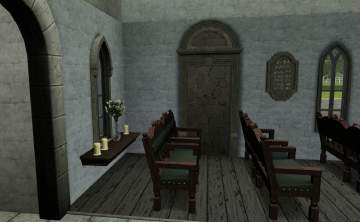 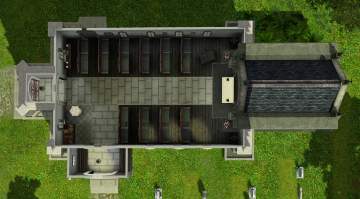 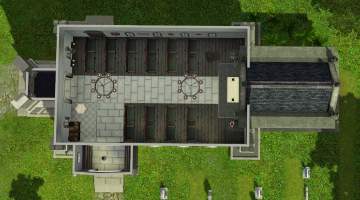 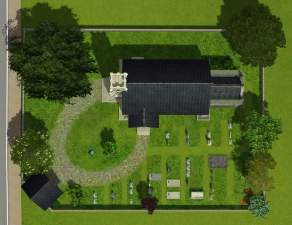 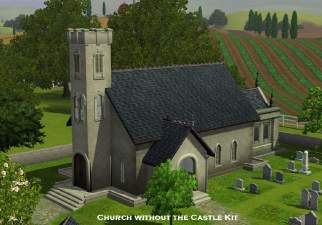 9.South_with_landscaping.jpg - width=1690 height=631
The south side of the church with landscaping

15.Interior_towards_tower.jpg - width=1848 height=1080
Interior, looking from the altar back towards the west door

298 Downloads 64 Thanks  Thanks 25 Favourited 2,602 Views
Created by hazelnutter100
View Policy / About Me View all Downloads
Uploaded: 23rd Jul 2022 at 7:25 PM
Updated: 3rd Aug 2022 at 7:28 PM
This is a church zoned as a graveyard, partly because I wanted a Sims cemetery that was peaceful rather than creepy, and partly to try incorporating the base-game mausoleum into a larger building, using Simgrassalidale’s matching roof. I originally tried to do this by having the mausoleum accessed from inside the building but couldn’t manage it while still having a reasonably church-like interior and sensible proportions overall, because of the amount of free space required in front of the mausoleum door. So there’s a very inauthentic door at the east end.

Like many real-life churches in my area, St Simeon’s is mediaeval but was extensively rebuilt and ‘improved’ by the Victorians. The ancient yew and remains of an Early Christian cross in the churchyard suggest that it was a place of worship even before the mediaeval building was constructed. The north door was blocked with rubble in the sixteenth century or thereabouts, either to reduce draughts or because it was the ‘devil’s door’ (there are articles about this online, if you’re interested). The south door is the main entrance and has a porch with benches and the parish notices, while the west door, in the tower, is only used on special occasions - I mostly keep it locked in my game. The lych gate has recently been rebuilt but still has its original coffin stone and benches for mourners (I didn't manage to avoid the macabre entirely

). The churchyard, as is increasingly the case, is being developed as a conservation area, with most of the grass being cut infrequently to encourage wild flowers and some left long for most of the year as shelter for small animals.

The lych gate uses columns from Pets but there are a few others that would work well, notably the spa column from Sunlit Tides.

The benches in the church are from Island Paradise but other chairs or benches could be substituted. (Incidentally, the whole length of each bench is usable despite the overlapping, although there is a chance of a Sim ending up with an armrest stuck through their middle

There are a few plants and other decorative items from Ambitions, Late Night, Generations, Pets, Supernatural, Showtime and Into the Future, which could easily be replaced.

The Complete Castle by Castle Kits, Inc. was used for the buttresses, the base of the tower (including the west door) and at the east end to help blend in the mausoleum. The building does sort of work without it (see screenshot), although some patching-in of wall coverings and a replacement door would be required.

Victorian Double Window and Gothique Window. Both of these could be replaced by other windows.

Fleur de Luce Chandelier – could easily be replaced by other lighting.

Chandelier Chain from the Now & Then Century Manor – decidedly optional.

The churchyard has headstones from Midnight Hollow (and also a couple of animal tombstones from Pets) but these could easily be replaced by ones from the base game – or you could just choose to have fewer graves. Incidentally, there seem to have been a lot of drownings and a worrying number of deaths by blunt force trauma. That’s because I wanted the colours of the tombstones to blend in with the church and nothing sinister, honest

Notes
Thanks to the creators of the CC and mods listed, to velocitygrass for the Add Any Lot Size mod, which I used during the building process even though the church ended up on a conventionally-sized lot, and the deco removal tool, which, as usual, was used on a number of items but is not required for the finished build. Finally, huge thanks to LazyDuchess for the SetHour Cheat. The CASTing on this one drove me nuts and being able to check it under different lighting conditions without having to go into live mode and wait was incredibly useful.
Other Information

Description: A country church, zoned as a graveyard and incorporating the base-game mausoleum.