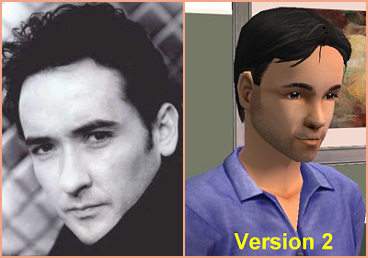 24 Thanks  Thanks     1 Favourited
[Update: It's amazing how very different things look after you've had a bit of sleep. So the John Cusack I submitted at 6:30 this morning now looks all wrong. I'm adding a new version, and new screenshots. I'll probably take the first file down after the new one gets approved.]

I saw a request by ahubb874 in skinning requests for John Cusack, and for some reason felt compelled to take on the task. I am a fan of his, but he didn't seem like the easiest sim to create. Indeed, he was not. That is one tricky nose to make, given the tools of Body Shop. I'm satisfied enough to use this sim in my own game though, so I figured I might as well post him.

Everything included in the file is default Maxis, except for the custom eyes which are made beautifully by echo66. I used no Uni parts, but I created John in the University version of Body Shop, making it a University-only upload...however I've been told (by Cazkiwi , much thanks for the info) that if you use Clean Installer to install the file, you can still use it if you do not have the University EP.