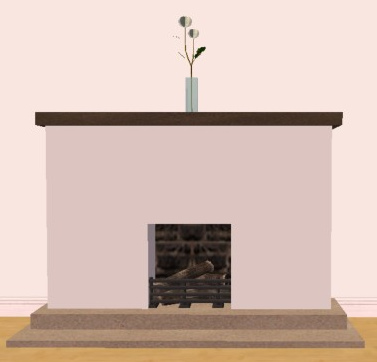 380 Thanks  Thanks     10 Favourited
This is a new mesh recolour, and means that you will need to download the particular mesh itself in order for this to show up in your game. See the Meshes Needed section or read the text for more information.
I really love CTNutmegger's fireplace facades. They cover up Maxis fireplaces, while keeping the functionality intact. That's pretty brilliant of her. I tried my hand at making some recolors, and decided I might as well share them with y'all.

You must have the meshes for these recolors to show up in your game. You can find them in this thread.

There are two sets here - in white/grey/black, and white/earthy tones. Each set has all four fireplace facade styles in it.

Big thanks to CTNutmegger, for making such cool objects, and allowing us to recolor them. Thanks also to Numenor and RGiles, for CEP.

On with the screenshots (oh, a quick note - I used the "boolprop snapobjectstogrid false" and "moveobjects on" cheats to get the painting to look like it's hanging on the modern fireplace facade).... Info about objects used in the screenshots:

- The orchids in the white vase (on top of the standard facade) are from Peggy Sims 2.

- The Totem vase (in the niche of the tall standard facade) is from WallSims.

- The ceiling tiles are by jgwhiteus, and can be found here .

- The recolor of Sim2Play's Karo painting is by me. I haven't uploaded it, but if anyone wants it, I'll get around to doing that.


These recolours may or may not be endorsed by cerisedrea.