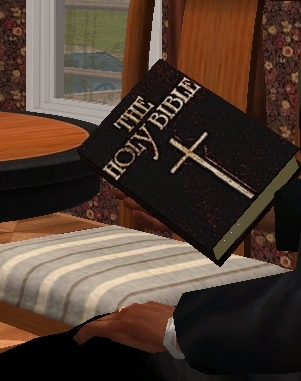 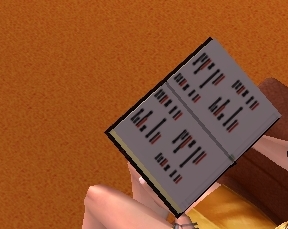 This will completley overwrite all of your Maxis books that you study from the book case with this Holy Bible.

If you have another default replacement book in your downloads folder, you should delete it before downloading this

If you say, "Well how can you gain cooking, mechanical, cleaning, e.c.t. skills from The Bible?" I have also compiled a list of some scriptures that apply to each of the skills.Wallpaper in the Bible cover screenshot created by me.

Here's the list (it's a long one, be prepared to get out your Bible and do some reading):

Some of the study interactions you may not recognize.They are new from an expansion pack (Freetime I think).The Research for College interaction is from University.


Additional Credits:
All who gave advice in Creator Feedback Forum BibleGateway.com (for the referencing)

Back to download view
39 Comments / Replies (Who?) - 34 Feedback Posts, 1 Thanks Posts
Hide Thanks Posts for this thread (Show only feedback)
Page 2 of 2
kewlkidjasper
Banned
DELETED POST
18th Sep 2009 at 6:12 PM

This message has been deleted by plasticbox. Reason: useless post
Kiana777

Hey, thanks for this...You know, its really nice that SOME people appreciate Christ, and respect him...I am a Christian, and I am so glad that this is here....♥♥♥

QUOTE:: "It doesn't matter if the weight of the world is pulling you down, with Christ you have everything," -Nick Jonas
PakistanisPrince
Test Subject
#27

its nice, can you do "holy Qu'ran"?? please please i need it for my futrue series "Christian Princess and the Muslim Pauper".

or is there some way i can recolour?? how can i do it??

You can recolor it, but I don't take requests, and I really don't feel like doing the Qu'ran. The way to recolor it is to open it in SimPE and then export the image to your desktop, and then recolor it how you like, and then import the image over the exported image in simPE, and then save as to your downloads folder with a different name than mine.
Johnny ramone
Test Subject
#29

man, you're awesome! glad to see some people try to spread the word of the Lord even in a game! xD
Metal Up Your S!!!
xXBornOfFireXx
Test Subject
#30

Cool skin. You make good religious books. Downloaded it and had some fun with it. Have you guys heard of the new god? He's totally awesome, his name is Bad-Ass Buddha. I know right! Buddha is already so damn bad-ass, how can this be possible. It's true, all of it. There is a Bad-Ass Buddha, and he is so awesome. If I were you guys I would join this religion, it's WAAAAY better. Free cookies and milk =D (I'm joking by the way. Not about Bad-Ass Buddha though, he's real, of course he's not as big as this "Christianity" religion.. Yet.. You'll see.. You'll all see..)

Any chance you could link a tutorial on how to do this? I love how you did it and i would like to make my own books as well ive been searching all over the internet on how to change the original books cover but no idea on how It would be extremely helpful Thanks!
joninmobile

OMG Ty so much! I followed your video, and tried to edit a book cover but when i got back into the game the book was black and glitchy any ideas on what i did rong? I am using Gimp to recolor the book. I paste the image over the original book cover and merge the layers and save it in my downloads just as your video said but it doesnt work. Any help would be Most appreciated!
Kagen08

That's just stupid, I can't believe someone made this.
go.god777
Test Subject
THANKS POST
#38

Thank you so very much for this! I am very excited to use it

It's definitely my source for truth and guidance in life.