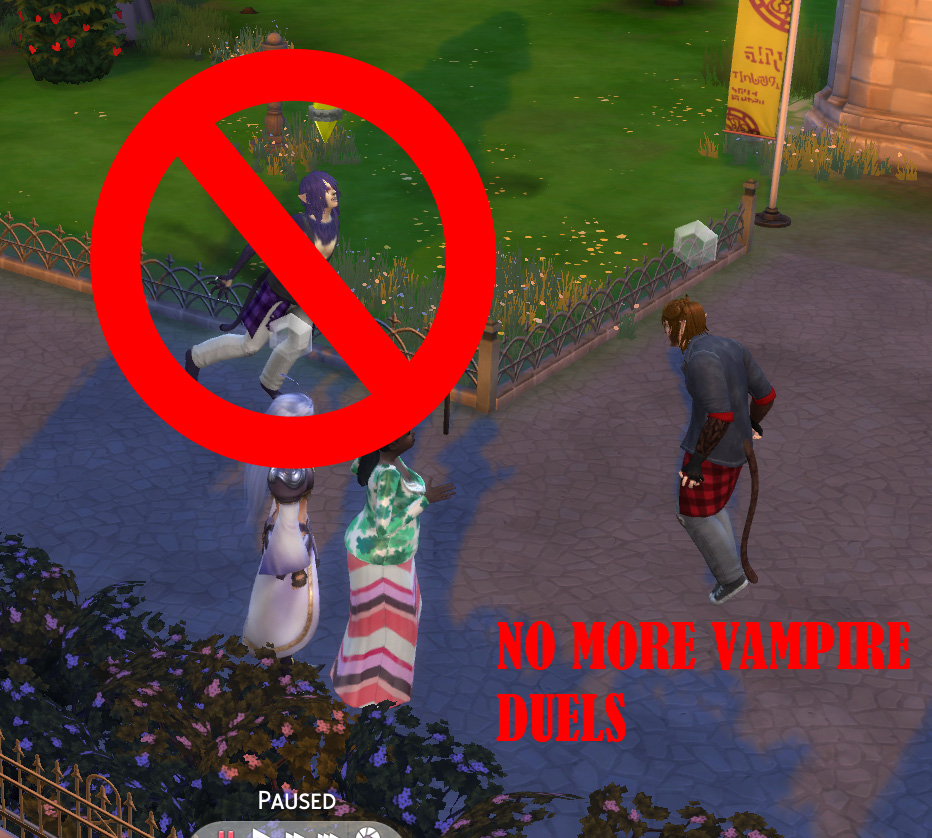 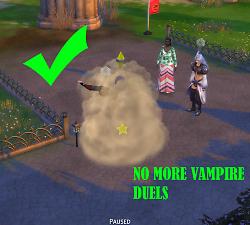 I don't really use vampires much, and those that I do use I treat more like werewolves or other beasts, so seeing them fly around like a comicbook villain or movie superhero just made me cringe...so, I got rid of it, or at least the regular fighting between them. Vampire Sims will still fly around when sparring with each other, but not when they fight enemies.

NOTE: Please use WinRAR to extract the files if you encounter difficulties using winzip!

A simple fix for those who don't like seeing vampires flying around like superheroes; complete removal of the Vampire Duel. All options for Vampire Dueling are removed and replaced with the default Sim vs Sim fighting system. HOWEVER, Vampire Sparring remains unchanged. See BUGS for more.

1. Sometimes you will see more than one pie-menu option for "Fight!". This is because of the way EA designed the vampire combat system, which uses 10 interaction files to cover all possible vampire vs vampire interactions (Dark Form vs Disguise, Dark Form vs Dark Form. ect) and I have replaced all of these files contents with the default Sim Fight system, which is just one file. The only way to fix this is for me to delete the other 9 interaction files, which I am not sure is such a good idea.

2. Because the Duel system is removed, Vampire Sims no longer gain experience from winning or losing fights with other vampires. To gain experience in Vampire battles, you need to use Vampire Sparring, as I left those files unchanged. The vampires still fly around in Sparring but because it's a command you yourself have to input, you can control when you want to see it or not.
3. Just like "bug #2", if you make your vampire sim fight with a ghost using the pie-menu option "Fight -name here-" your vampire sim will still end the fight flying in the air if they win, if you want them to fight a ghost just use one of the "Fight!" options in the pie menu and NOT the one with the target sims name on it.

This mod will not work with other mods that alter the Vampire combat system (see below for specific file changes), such as the vampire duel interaction files. You cannot use this mod if you do not own the Vampires Game Pack.

I removed the blacklisted trait flag from the default sim combat interaction file and copied the contents and pasted into the following vampire duel files.
The Following files are changed:

I like to fix what already exists in the games, or to add character mods from my own original books. I am new to programming, so expect bugs and slow updates.