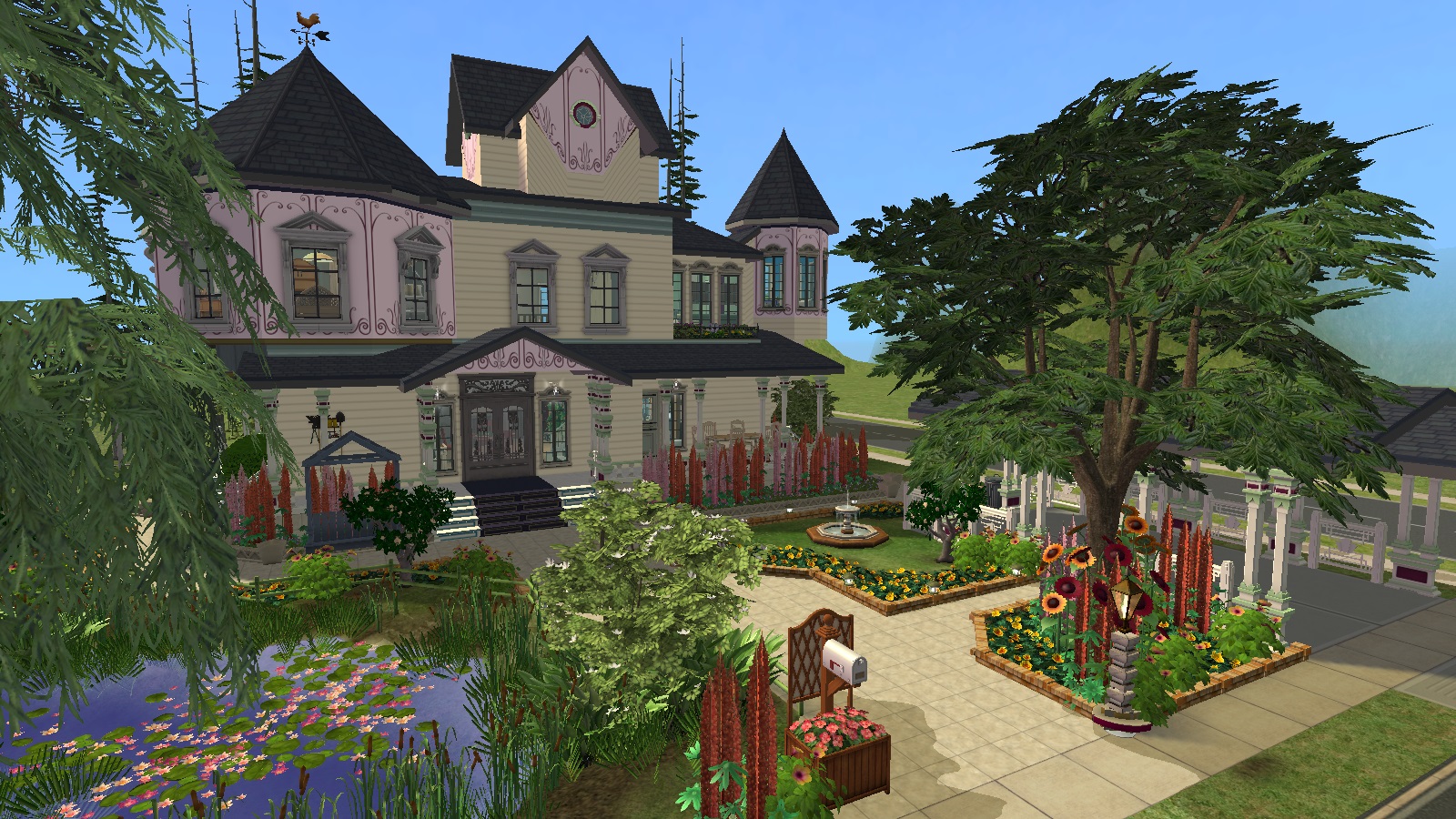 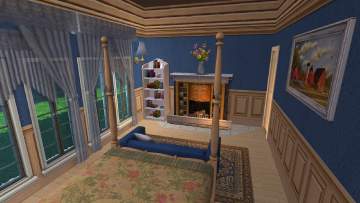 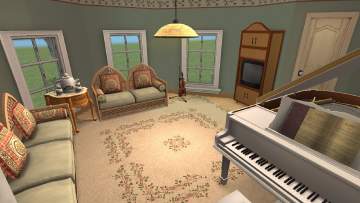 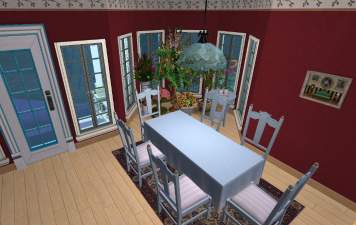 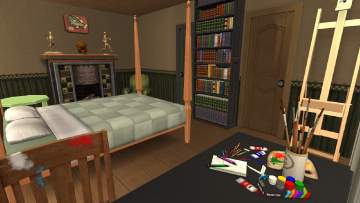 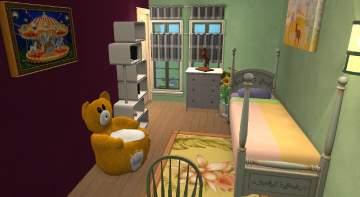 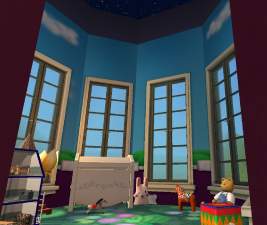 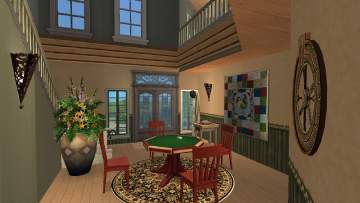 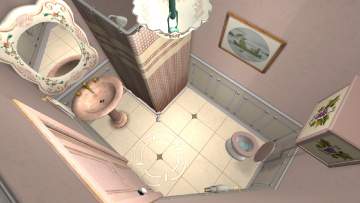 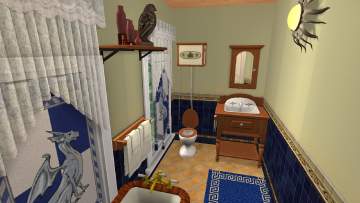 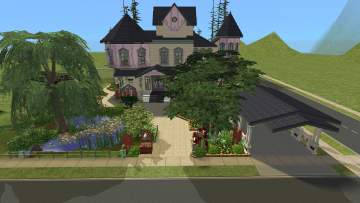 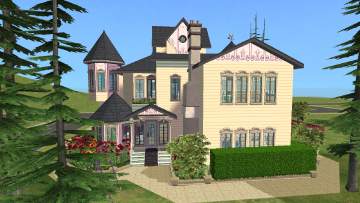 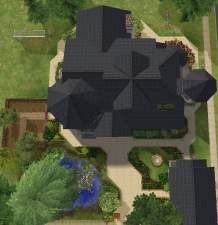 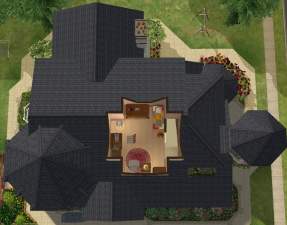 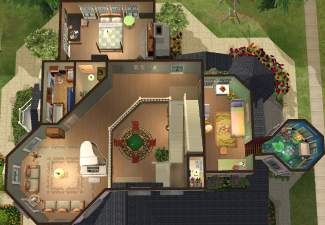 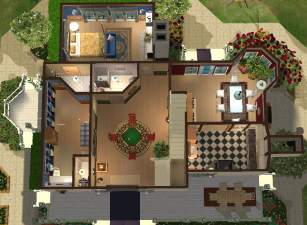 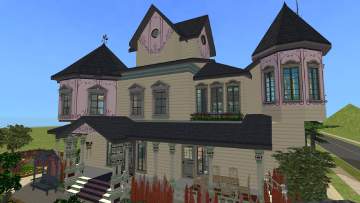 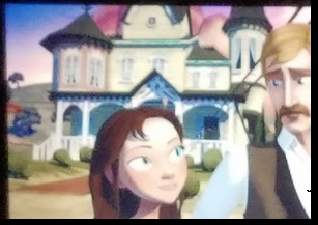 LuckysHouse_Reference.jpg - width=307 height=217
this is the actual, and only pic I built it with

So, My kid was watching that one horse cartoon on Netflix (Spirit) I glanced at the screen and was like "cool house" so I snapped a pic 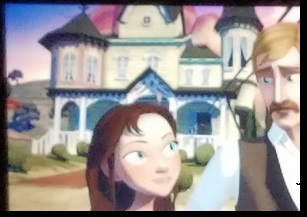 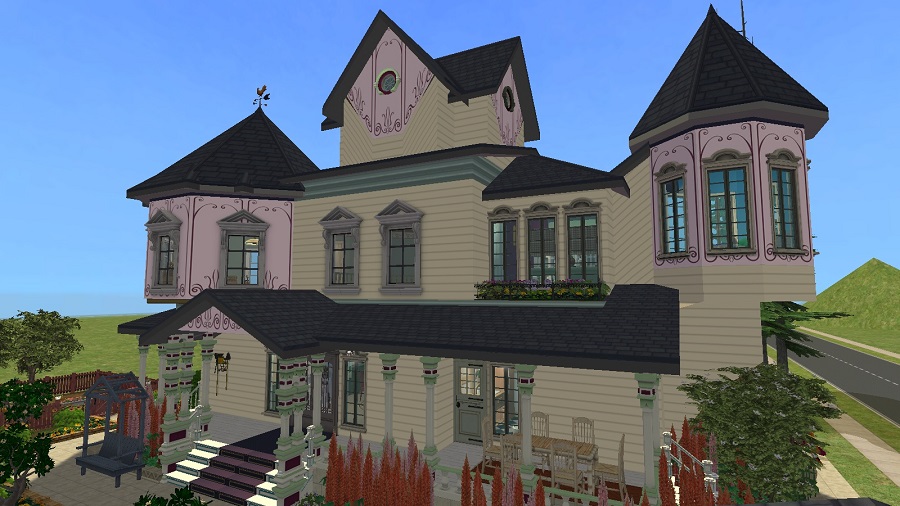 I spent no time whatsoever watching the show to get other angles or an accurate interior, because I don't actually care. But I do have a vague sense of the characters from having it on in the background. So I kept them in mind a little. 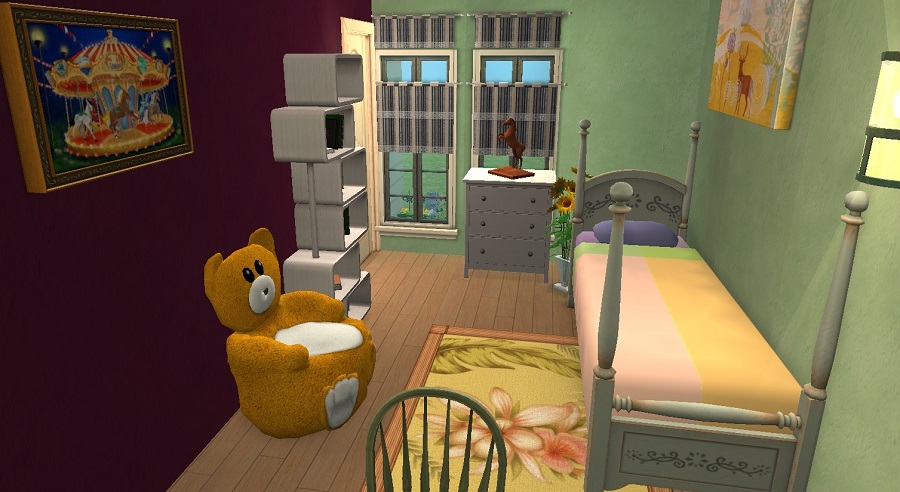 This is Lucky's room.

The decor is vaguely old-fashioned, but I wasn't too strict about it. 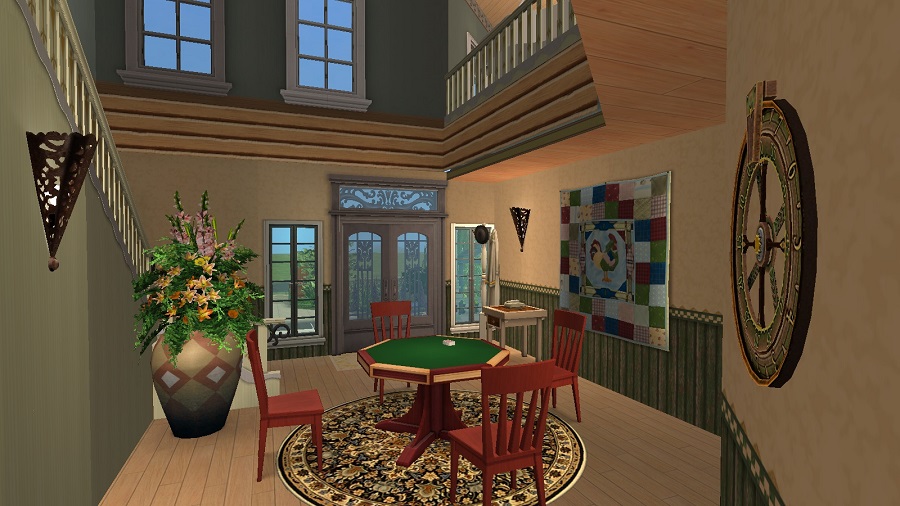 I think this is the first time I have ever used that rooster quilt...

Let me know what you think (:

--Constrainfloorelevation false was used for the two dummy floors and the attic
--Moveobjects was used and some things aren't snapped to grid, but the furniture works. Except the vanity is in a small space, so they can makeover themselves, but they can't makeover others.
--The burglar alarm is inside the dart board
--The phone is by the front door
--There is a sprinkler in the bush by the barbecue, in the hood above the stove, in the wall above the fireplace in the blue room, and in the light fixture in the green room

A copy of the lot was play tested, but please message me if you run into any problems

Reccomended Mods
Rugs - zMOG!! Off Grid!! by HugeLunatic --You don't need it, but it's awesome, and if you don't have it some of the rugs will look funky until you pick them up and put them on grid
Water Inaccesible Flowers by dickhurt --If you like the landscaping you're gonna want this
Trim Inaccessible Bushes by Cyjon --Likewise for bushes

I definitely spend way too much time playing this game. But almost exclusively the building buildings part, not the micromanaging tiny idiots part. And I sometimes take breaks for months at a time.

I always build CC-free because if I don't have a limited number of options I will never, ever be satisfied and I will spend days and days looking for one counter that fits this kitchen perfectly--and I finally found it--but I had to edit the texture a bit because it didn't tile perfectly, but it's finally done--Oh wait, I changed the wallpaper so now I need to scour the entire internet for counters all over again, and--and I will literally never finish anything. So I've limited myself. But at least CC-free is convenient for downloading. Hope you enjoy them!

Feel free to message me with questions or constructive criticism regarding my uploads.

-- Policy --
-Do not upload my work to other sites.
-Feel free to use my lots in the background for movies or pictures or whatever.
-If you make SIGNIFICANT changes to a lot you may upload it, just not to pay sites.
-For either of the above make sure to give credit and link back to me.

And please use good judgement on the definition of significant. Redecorating one room is not significant. Redecorating the whole house in a different style or for a different purpose is. Adding one room is not significant. Adding a whole other wing or building and updating the landscaping is. That being said if you do use my lot as a jumping off point, by all means message me a link when you upload it because I'd love to see what you come up with.

Weird little sidenote: I often edit lots I download to have different size footprints to fit in with my neighborhood. It can often involve doing tedious things like making a whole building three tiles narrower so that it will fit inside 20 squares, and then a million little changes are necessary to keep the lot functioning and looking good. I don't know if anyone else ever does that, however if you do but then find the result isn't really "significant" enough to be it's own post (4x5 => 4x4 probably not significant, 4x5 => 2x2 significant unless all you did was get rid of the yard) you might want to message me, because I'd be interested in adding yours as an alternate version to download on my original post (with credit and a link to your profile)