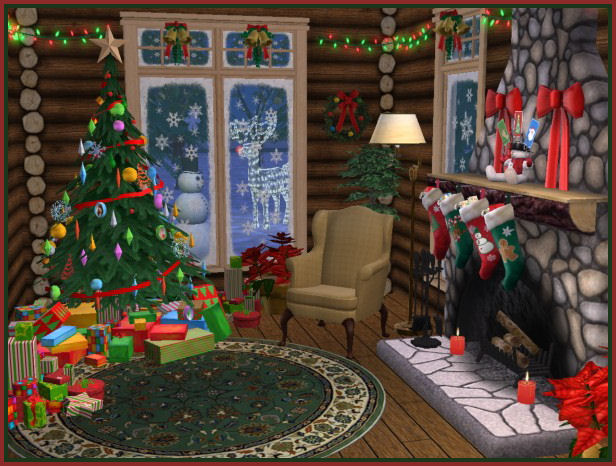 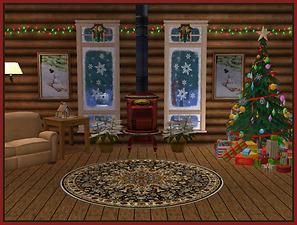 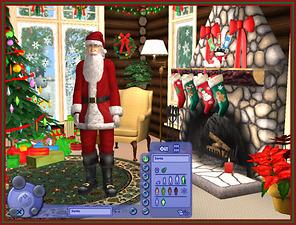 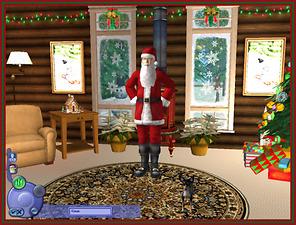 3,413 Downloads 447 Thanks  Thanks 55 Favourited 55,860 Views
Picked Upload!   This is a picked upload! It showcases some of the best talent and creativity available on MTS and in the community.

Created by enchantedw0lf
View Policy / About Me View all Downloads
Uploaded: 16th Dec 2007 at 4:19 PM
Updated: 23rd Dec 2007 at 3:47 AM by tiggerypum
***EDIT: This CAS! has been fixed so that the sims will not freeze before you can get them into your neighborhood by editing it in a game that DOES NOT include Seasons. You can still use this if you have Seasons, but Seasons is no longer a requirement for the download. Also, there is a different floor down now because the wooden one in the original screenshots was a Seasons floor. Now it's the Jute carpet from the base game, I think. I'll be back this afternoon with screenies showing the CAS! with no sims and the new floor. I have uploaded two screenies showing Santa on the carpeted floor for now. Enjoy!***

Greetings! I come to you today with a new CAS! screen. This one is Christmas themed. It definately requires Bon Voyage, and the Happy Holiday's Stuff Pack. I am confident that no other EP or SP is required, but if someone has an issue, please let me know.

For the CAS! to show up in your game as it's shown in my screenshots, you MUST have Windkeeper's Invisible CAS! Objects in your game. Three are required:

Round Podium
wind_CASinvisibleroundpodium.package - makes round rotating podium invisible. The podium still functions as it should, you can rotate your sim the usual way.

No Mirror
wind_CASinvisibleobjects_nomirror.package - removes all objects, including mirror. Leaves only rotating podium.

Family Screen Objects
wind_CASinvisibleobjects_familypart.package - removes all objects from second half of CAS screen, the family screen.

These fantastic items can be found at: http://hideki.modthesims2.com/showthread.php?t=162363

Now, how to put this into your game:
Extract the ChristmasCAS!.rar somewhere on your desktop or in a empty file. Then move the folder named ChristmasCAS! directly into your mydocuments/EAGames/TheSims2/Downloads folder. That's all it takes.

If you want to remove the CAS! and revert to the original one, just remove the folder labeled ChristmasCAS! from your downloads folder.

Also, don't forget to remove Windkeeper's Invisible CAS! Objects from your downloads folder if you want the original one back, or if you use a different CAS! screen that doesn't require them.

*Remember*
You can only use one custom CAS! screen at a time in your game. I actually keep a folder on my desktop with several in it and when I feel like something a little different, I just pull the current one out, and pop a new one in. It's really easy this way.

I hope you enjoy it!

Additional Credits:
Windkeeper for the Invisible CAS! Objects
Other Information

**I don't care what you do with my creations as long as you do not post them anywhere claiming them to be your own. I would love to see any pics you do using my creations, too!

**I have plans for a series of Enchanted lots and hope to get those done soon. I also want to do some CAS screens and I have another neighborhood terrain brewing, so you might be seeing me some more!