Face paint for your Robots/Cyborgs/Aliens 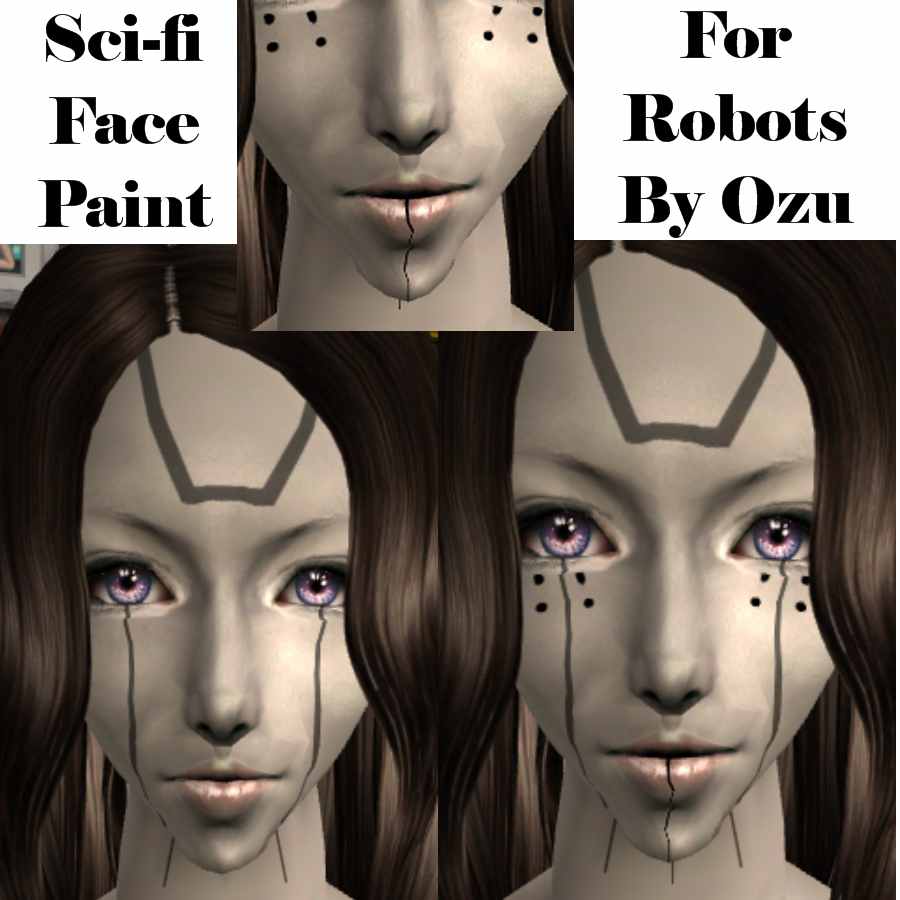 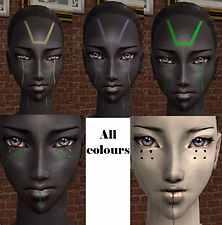 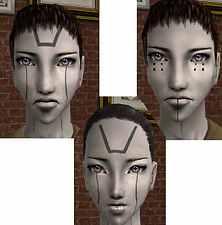 2,665 Downloads 333 Thanks  Thanks 26 Favourited 34,288 Views
This download is part of the SciFi Creator Challenge

Created by Ozuttly
View Policy / About Me View all Downloads
Uploaded: 18th Feb 2008 at 1:34 AM
Updated: 8th May 2009 at 1:36 PM by Echo
Well, I decided to do something a little different from what I normally do for the sci-fi challenge, as my every attempt at meshing asploded on me. It's a little less elaborate than I'd hoped at first, but they're still very functional. There's two types, one with the little inverted trapezoid on the forehead and the two lines under the eyes, and another with a set of four dots underneath each eye and a thin line going down the center of the face from the lower lip. These are all multi-wearable and can be found under full face makeup. They work for both males and females, with the first type having four colours, green-grey, green, grey and black, and the second set only having black and green. The two greys work best on darker skintones while black and green look best on lighter skintones. There's a little problem where the very top of the inverted trapezoid will not connect directly with the hairline on some hairs with very high hairlines. This is shown in the images where the model is wearing the maxis bun hair. Another thing that I haven't pictures is that the lines that go down the front of the face also go down the back of teh neck. I dunno how to fix that, sorry, so if you don't like that I suggest using a little longer hair. These are very small issues though.

Additional Credits:
I believe the eyes are by yumedust, but I could be wrong.
The skintones are all by louis/simcribbling
The eyebrows are by me
Hair on the female models are by maxis and Nouk, while the hair on the male model is by HP. None of the models are wearing any other makeup.

Extra thanks to the tutorial on making makeup multi-layerable!
Files Need help with downloading or installing content? Click here!

OK! As some of you may or may not have noticed, I have discontinued the anime wall hangings series. I figured that it might be good to try and do other things for a while. I may return to it later on if I get really bored, but I kinda doubt it.

Policy: I would appreciate being notified if you use any of my stuff for anything or include it in anything. You don't NEED to tell me, but I would like knowing. If you want to use my textures for your own creations, you can, I don't mind. You don't NEED to ask, but once again I would like to see what you've made! ^^ HOWEVER. Stealing my creations and uploading them unchanged would make me very sad, so don't do that. You can upload my stuff in sims or lots if you want, I suppose...

One big thing: NEVER upload ANYTHING I made into ANY part of a pay or donation set. EVER.