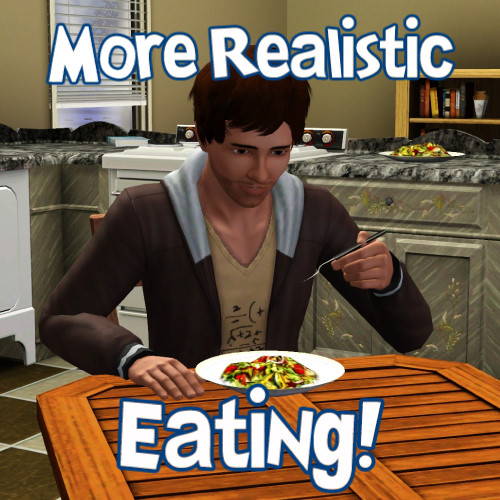 53,550 Downloads 1,060 Thanks  Thanks 438 Favourited 155,224 Views
Picked Upload!   This is a picked upload! It showcases some of the best talent and creativity available on MTS and in the community.

I realized I'd uploaded the file missing the Lick Clean file. I have since added a new package WeeAlbet_DiningOverhaul which combines all three mods into one package. I have also added WeeAlbet_LickCleanLessHunger as an individual package for those who have already downloaded.

If you download and install the new Dining Overhaul mod, then remove the Less Filling Food and More Bites Per Meal packages. If downloading only the Lick Clean, Less Hunger mod, you can use this fine with the first two files.

The values used in this mod remain unchanged. Sorry for the mix-up.

Hello everyone! After going back to play on The Sims 2 for a while I realised that I prefer the way that Sims eat in that game. Full meals wouldn't completely satisfy hunger and it took a while for them to eat and they would chat. I missed this and decided to see if I could make this happen in The Sims 3. So, here we have my first two ever mods! The reason I wanted to make this mod was because I wanted Sims to be able to eat a main meal and have a dessert after it too.

There are two files contained within this mod and each one changes the way that Sims eat. It is perfectly fine to have one or both in your game at the same time. I'll discuss what each file does below.

Both of these files combined will hopefully allow your Sims to have a better dining experience. I enjoy having my Sims sit down as a family and eat, so when one Sim has already sat down to eat, they won't be finished by the time everyone else comes along and joins him. These values also work with the food introduced to the game through The Sims 3 Store! So feel free to have your Sims bake a pie for after dinner with the Baking Station.

There shouldn't be any other mod conflicts when this mod, but I wouldn't recommend you use it with another mod that alters the same things (although I've not seen this mod before which is why I made it). UPDATE! Thank you to those who made me aware of this in the comments, it seems that this mod will conflict with a mod that changes the cooking time and eating time.

This mod shouldn't require any expansion packs or stuff packs and it was created with game version 1.63.

Additional Credits:
The awesome S3PE!
The easy and straight forward tutorial by Nona Mena
Cinderellimouse for listening to my babbling.
Other Information