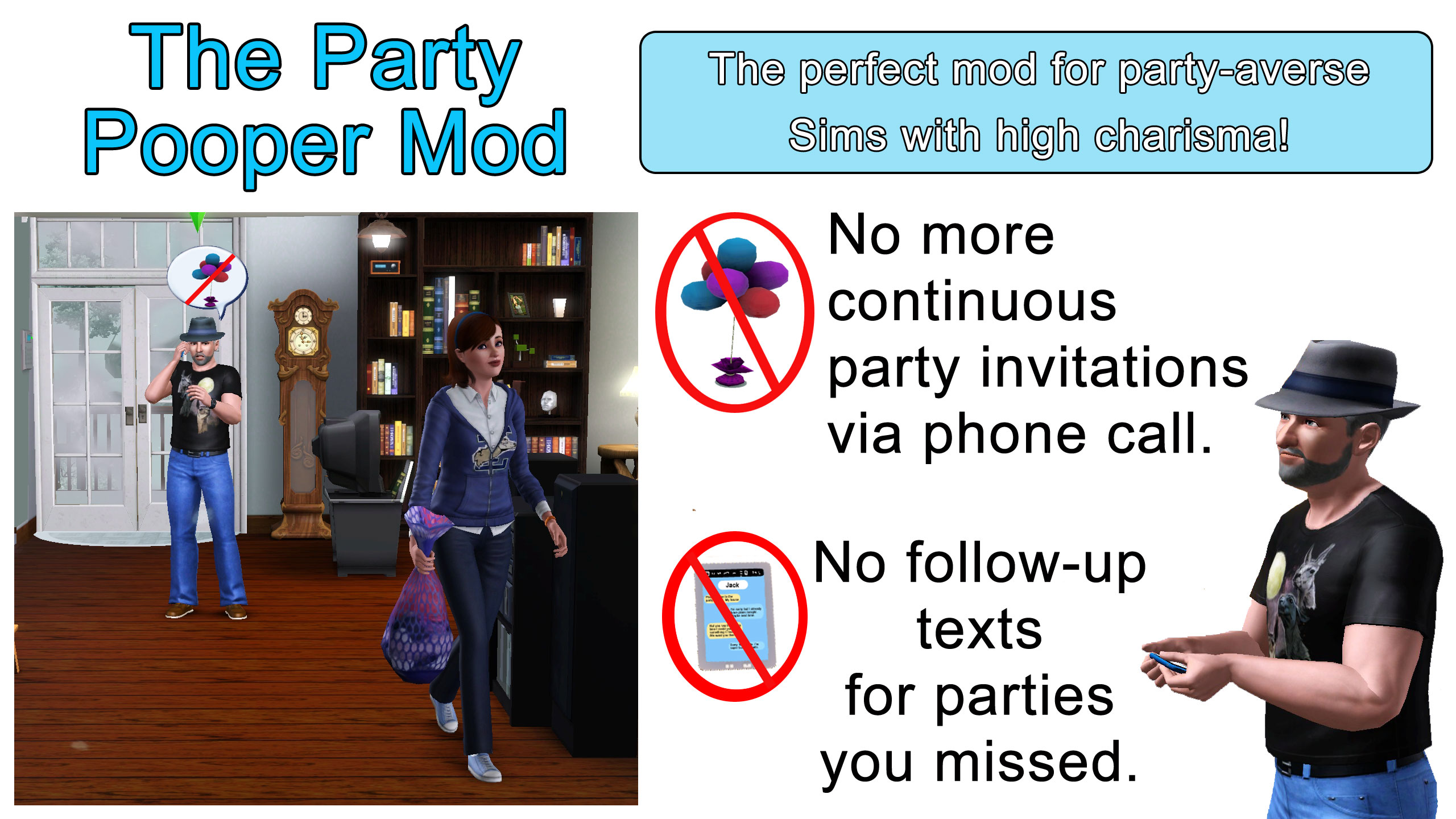 Who this mod is for:
If your sim is a social recluse whose phone is ringing off the hook with incessant party invitations AND you don't plan on attending any parties, then this is the mod for you.

What This Mod Does:
It does 2 things:
1) It suppresses all of those obnoxious, continuous party invitations you get via phone if your Sim has high charisma.
2) It also suppresses the IM texts that follow when your Sim misses a party.

Fair Warning:
I'm not sure if this will suppress all NPC parties generated (even ones you're not invited to.) I'm also not sure if it would affect your ability to throw a party (though I strongly suspect it won't since the modifications I made revolve around suppressing *NPC* parties that are only generated after the player has failed to throw any parties.)

What You Need to Know:
-

This is not a core mod. It is a tuning mod that should work fine with other mods. It would only conflict with other mods that modify the NpcParty_0xff8eb407674bd8a4 xml file found within the GamePlay.package file.
- Tested over the course of several hours and multiple sessions without any problems by myself and my brother. Working with Version 1.69.43.024017. Works with all expansions.
- Uninstall tested and safe! It should be entirely safe to use with no repercussions for uninstalling later on.

How to Install:
Extract the contents of the zip file into the /Mods/Packages folder.

Background for this mod:
One of my active sims is an introverted homebody. He's also an IT guy. Accordingly, I'm using an IT career mod. Unfortunately, the mod requires high charisma at higher job levels. Not a deal breaker but unfortunately, I noticed that with high charisma, he was constantly getting pestered with phone invites to attend parties and then with IMs afterward when he didn't show up for the parties. It got to be really disruptive and I couldn't ignore it anymore. My efforts to find a mod that would disable party invitations were fruitless so I decided to try to mod it myself. This mod is the result of that effort.

Feedback:
If you like the mod or find it useful, please click the 'Thanks' button! This was my first mod and I spent an hour and a half combing through code and making sense of how to mod. Any positive feedback you have is very welcome. :-)

See: Game Help:TS3 CC Basicswiki for a full guide!
Back to download view
24 Comments / Replies (Who?)