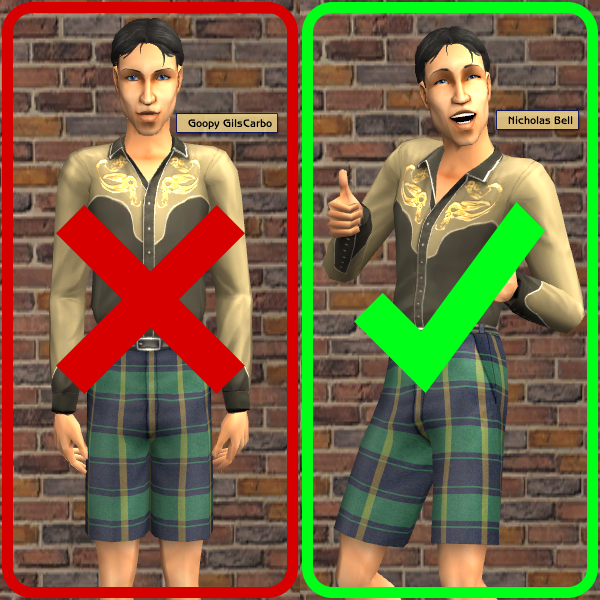 Created by TuxxedoCat
View all Downloads
Uploaded: 1st Feb 2018 at 7:33 PM
Updated: 18th Feb 2019 at 3:21 PM
Have you always hated the default names EAxis put in the random name generator? I mean, who actually names their child Goopy or BJ?
I know I always did, but I also never found a mod with a list of names I actually liked, oftentimes a lot of the names were really obscure or unneeded.

This is exactly why I went ahead and made my own! This mod contains exactly 1000 female names and 1000 male names, as well as 1700 last names. Most of the names are common names or alternate spellings of common names. Granted, there are still some more obscure names in there as well, especially for the males. Turns out female names are actually more diverse; who'd have known!

The names are not very culturally diverse, they'd mostly fit for an English-speaking setting (US, UK or similar). There are some last names with a tinge of Spanish or Asian influences in them, but to me they felt appropriate because not everyone has a similar background, even in English-speaking countries. Because of this, the mod will not create awkward combinations of names from different cultures, but ones that fit a certain setting. The names themselves are taken from a variety of different sources online.

There are some first and last names that are the same, so you might end up with a townie called "James James" or similar in your game. This is extremely rare and easy to fix with the Tombstone of L&D or the Sim Blender, probably with other mods as well.

Another thing to note is this only replaces the English/English (UK) translations of the game. If you want this mod for another translation, please let me know and I'll gladly add it.

To install, simply put the Live.package file in your Downloads folder.

Do not change the file name to anything else or it will not work!

Conflicts:
As this is a default replacement, which overrides the Live.package file from the game, you can only have one custom naming mod installed at a time.
This mod will conflict with any other custom naming mods.
Files Need help with downloading or installing content? Click here!