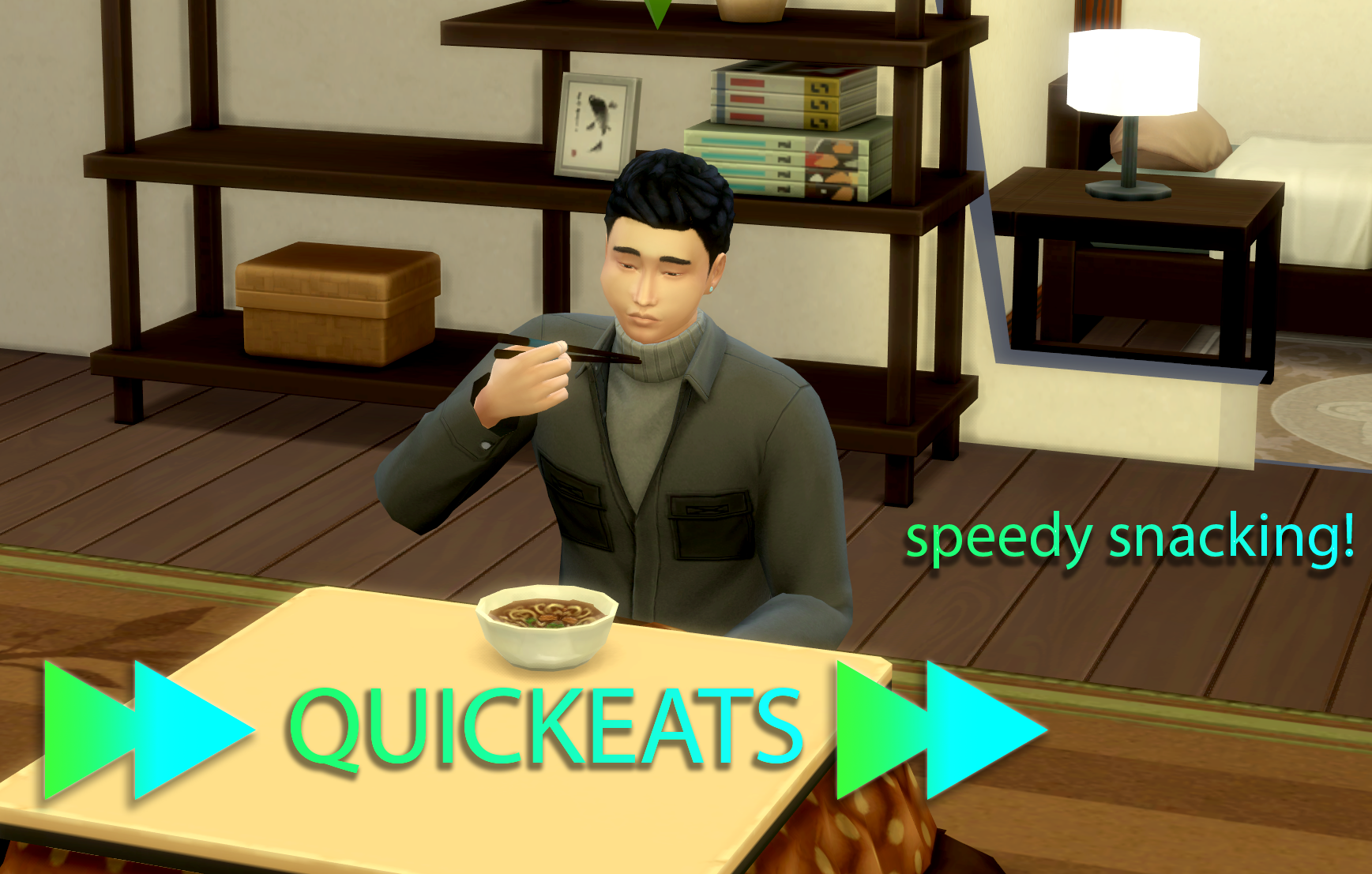 
Ever been frustrated at your Sim's lack of will to nourish themselves, even when you've put a plate of food right in their hands? Have you canceled eating or drinking because it was just taking them way too long? Well, I've got a fix for our Sims' lack of focus on nutrition!

With QuickEats, food and drink are your Sim's main concern when they're eating. They will continuously eat until they're finished, and depending on the flavor you choose, they can also interact and become distracted from their food to different degrees so that they can complete dates and other events that require discussion over a meal. No more aimlessly walking around festivals with half-eaten samosas for your Sims!

I saw that the other Faster Eating and Drinking mods on here have become outdated, so I decided to publish this personal use mod I made in August for a demonstration.

Slow-Eater: In this flavor, the base_weight of passive consumption was changed from 1 to 200. This allows for more distractions (or time spent) while eating, but food is still a higher priority. They will continuously eat until they are finished, with brief breaks for animations and more allowance for interactions. This is the slowest flavor.

Peckish: In this flavor, the base_weight of passive consumption was changed from 1 to 400. This allows for some distractions while eating, but obviously food is much higher on the list of priorities. They will continuously eat until they are finished, with brief breaks for animations and more allowance for interactions.

Hangry: This flavor is a high mid-high priority one. The base_weight of consumption was changed from 1 to 600, giving Sims more focus on eating than if they're Peckish, and less opportunity for distraction. You can still interact while eating and drinking, but they will stop to do other things much less often.

Ravenous: For the hungriest Sims, this flavor is the highest priority of the 4. The base_weight of consumption was changed from 1 to 800, making Sims put almost all of their focus on food with minimal distractions. However, you can still interact while your Sim continuously eats -- a Sim won't do much autonomously in terms of other interactions, though!


This mod will conflict with any mods that alter these tuning resources:

Additional Credits:
Special thanks to:


Download the .zip file of your choosing and extract the .package into your Mods folder.

Only use ONE flavor of this mod!

Make sure that if you decide to change flavors, you delete the old one from your Mods folder first, and then delete your localthumbcache.package found in your main The Sims 4 folder.

Need more information?
Back to download view
44 Comments / Replies (Who?)