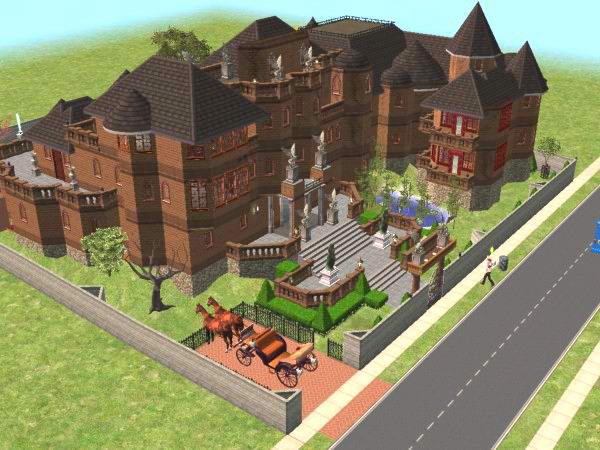 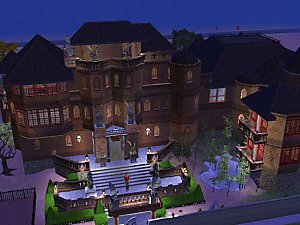 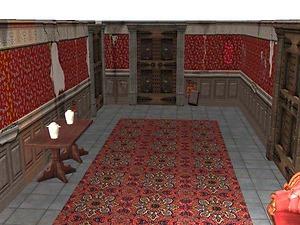 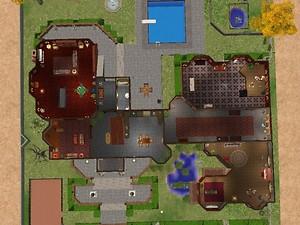 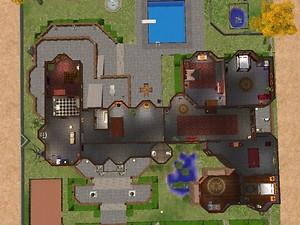 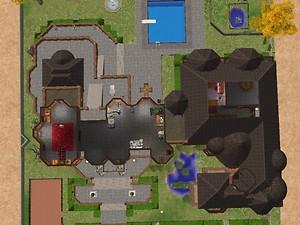 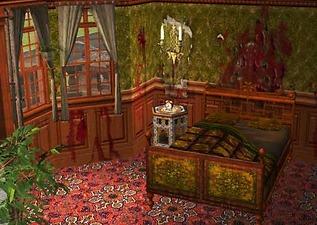 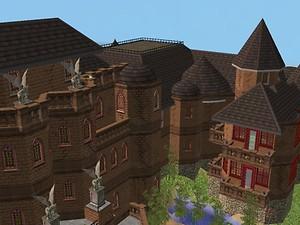 1,030 Downloads Quick download 152 Thanks  Thanks 13 Favourited 24,571 Views
Personal Picked Upload!   This is a personal favourite of the creator!

Created by SnowHawke9 View Policy / About Me View Downloads Home

Ancient. Decrepid. Old crumbling mansion from around 1910. The right words to describe this Edwardian manor are hard to find. There are many hallways and rooms for a sim to get lost in or be found by a ghost wandering the long halls of this ancient house. A bloody bedroom even. There were 14 ghosts in this house so there is a bit of blood here and there.

There are 20 rooms in this manor with 13 gables.
The only small rooms in this house are the bathrooms and the dungeon. These rooms are large and some oddly shaped as many Edwardian manors had in those days. Complete with a ballroom and library. There is a lot of space in the foundation so one could enlarge the dungeon if they wanted to do the work on it.

5 bedrooms, library with pokercard room, music room, ballroom, laboratory, sanctum room, pool, driveway, graveyard, living room, wide, long hallways and one tiny hidden hall on the 2nd floor. The main hall on the first floor is called the "Hall of Souls". Most of the 14 urns were on tables in that hall. The rest of them in the graveyard. There are 6 balconies, 2 sundecks, a graveyard pond, and one swimming pool. There is a lot of unused space so one could enlarge this house even further as I have only used partial space on the second and third floors.

Since the ghosts are sims I could not include them, but if you don't already know this, if you have "open for business" you can move ghost tombstones with your sim's backpack. There are lots of tombstones in the Spector house in Strangetown. Package the 13 Dead End Rd "Spector" house from strangetown and re-install to the neighborhood where you want your haunted house to be. Take your new sim or one of your current sims to the neighborhood sim bin then "add to household" of the Spector house, 13 Dead End Rd in that same neighborhood where your haunted house is.

Collect the tombstones by opening your backpack and dragging the stones into that. Then have your sim move out. Back from the neighborhood sim bin put your sim into the house you want to haunt. The tombstones will either be on the sidewalk beside the added sim or still in the sim's backpack.

All custom wallpaper by Snowhawke9

Not included but had been used in this house:


If you would like to see the rooms, there are extra pics on photobucket Interior of Moldova Hel House

Some of the custom content like the Tattered Ragged Curtains by Nano Nona requires a download of Yggdrasil's off-site mesh,http://www.spiffysims.com/modules.p...ength_Curtains/
and DCAB's piano may require the Custom Instrument Hack V4.0 at http://www.modthesims2.com/showthread.php?t=138221 which says it is needed to allow new instruments to work.

I have added a non-furnished version of Hel House by request.
unfurnished $177,417.00

It contains nothing but the Maxis original lab equipment. I cleaned this with "clean-installer" and tested this lot after cleaning it out and it works fine.

A bit of history, it used to be the "Beaker house" from Strangetown and it grew in size as I played it. More than a year in design work here by just playing the lot. Look at the interior of the left wing of the house and you may recognize its original "Beaker" beginnings.

Also Thanked - Users who thanked this download also thanked:
Vampire covenhouse with secret basement mausoleum
by kashinthegreen
The Graveyard from "The Phantom of the Opera"
by V1ND1CARE
The Bradbury House, an Old Victorian ~ Haunted. Ghosts included. ;)
by mpepe
Straconka's church
by Margierytka
Modern Giza
by Margierytka
Victorian Boardwalk- shopping and recreation beachfront with no CC
by ruthless_kk
JJ McTrick's Mansion
by bluetexasbonnie
Country Tudor
by jhd1189
Legend of Zelda Majora's Mask: Romani Ranch
by Ultimah
Widbode - A Haunted Home That Does Not Require Expansion Packs
by Christine11778

Anyone is welcome to use my wallpaper or houses in their uploads, videos, and stories. No pay sites. Just add a link back to it and I will be happy.