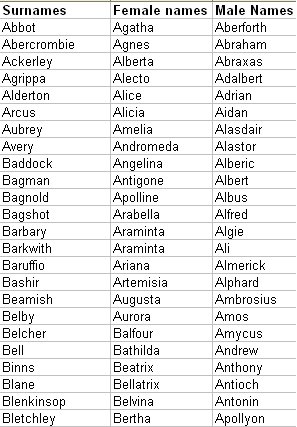 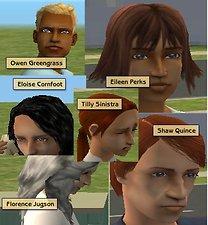 
Got a Magic themed neighbourhood and fed up of the maxis default names? Well now your townies and NPCs can have genuine Harry Potter names.

Names you will see:
For examples of possible names see the pictures below (one an excerpt from the list of possible names the other some new Townies and NPCs my game randomly generated), basically any combination of any of the names from the Harry Potter universe - including the multinational ones - with a few exceptions

Names you will not see:
You will not see any of the surnames that are vital characters in the Harry Potter books; Potter, Weasley, Granger, Dumbledore, Riddle, Gaunt, Black, Malfoy etc
But you WILL see their first names, that is Harry, Hermione and Ron could appear

To install just unzip anywhere in the Downloads folder or into a sub folder.

Note: When you start a new neighbourhood you will still get the original maxis non-wizarding names as the game automatically imports these. To get a fresh neighbourhood see here

Also Note: If you want default townie replacement names but don't fancy having Urquhart Scamander running around your neighbourhood I suggest Jordi's original name replacing hack. These files are in NO WAY compatible with each other and in fact one will automatically replace the other

Additional Credits:
A HUGE thank you to Jordi for allowing me to adapt and upload his original file
JKRowling for creating the Harry Potter series
The Harry Potter Lexicon (the website, if the book does come out I wouldn't thank it because I would never endorse it)
Wikipedia's list of Harry Potter Characters