Furniture What Matches: The Talking Table and the Simple Sit Chair 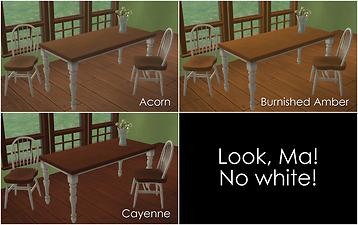 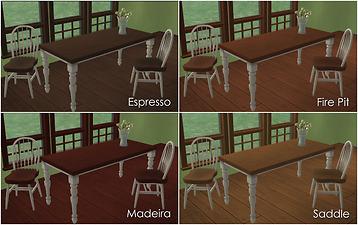 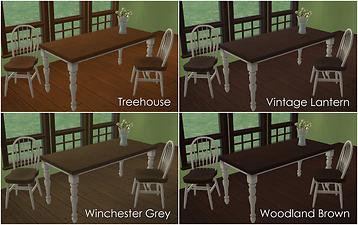 923 Thanks  Thanks     76 Favourited
This is a Maxis Recolour which means that it is a recolour of an item that already exists in your game. Please check the Expansion pack requirements to see which game pack it recolours.

Picked Upload! This is a picked upload! It showcases some of the best talent and creativity available on MTS and in the community.
EDIT 6/13/2012: For anyone who might be interested, there is an "alternative" version of this download, solid-color tables and chairs, now available from my LiveJournal, in this post here. I don't like them as much...but maybe you'll like them better!

So where have I been, you ask? Professionally very busy. It's good for the bank account, not so good for my poor game or making stuff for it and preparing it to share. But, I have about a two week lull, so I thought I'd try to get some shtuff out there...

And I did things a bit differently with this set, which is from the base game, so no EPs needed. I was "inspired" by the set that's sitting in my morning room behind me right at this very moment. It served years of hazardous duty as the "school table" when I was homeschooling my brats, and the table's shape is almost exactly like the game's Talking Table. It has a fake-wood top with a white frame and legs. And it has matching Shaker-style chairs with fake-wood seats and white frames, just like the Simple Sit chair. So, that's exactly what I did with this set: The tabletops and chair seats are in wood colors, the rest of the parts in white, like so, with the other colors attached in similar pics: 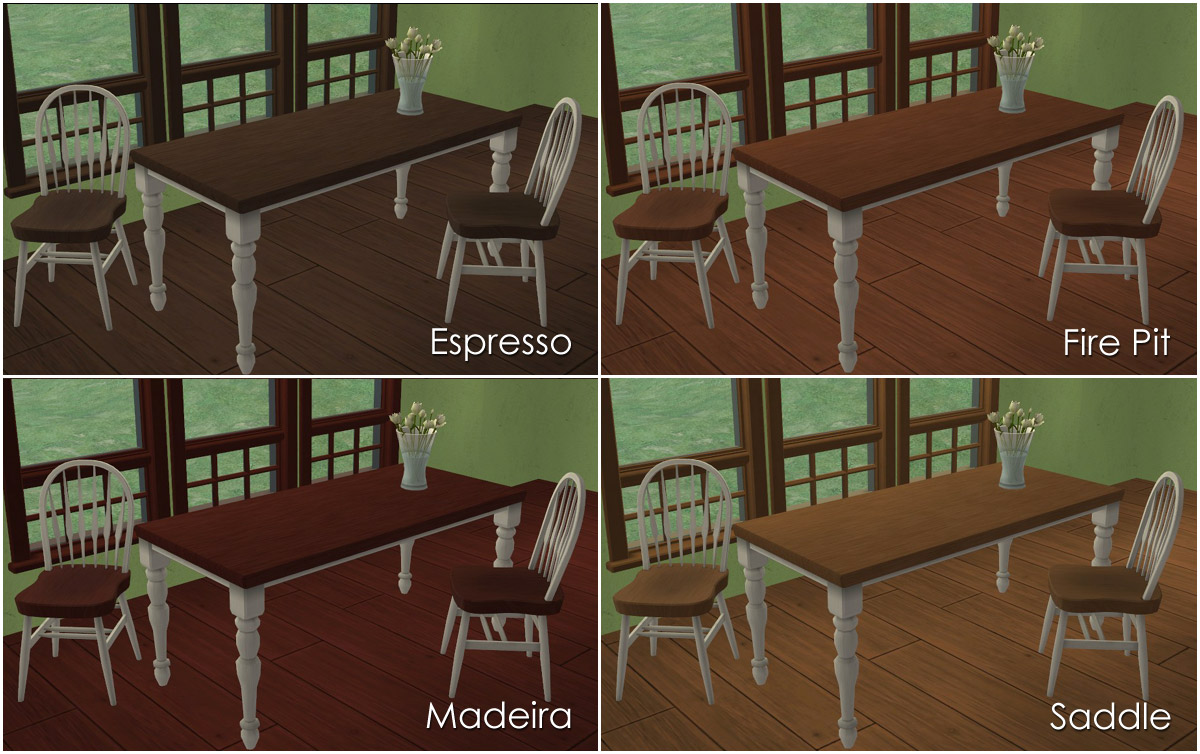 I did also make a solid-color version for both of these pieces...but I didn't really like how they came out for some reason, perhaps because I subliminally think that they should look like this, given that I own a set just like it.

I'll share the solid versions if there's some kind of demand for them, or maybe I'll just go ahead and stick 'em on my LiveJournal. Yeah, that's probably what I'll do. But otherwise, I like this version a lot better, so it's what I'm putting here on MTS.

I removed the painted-on flowers from the tops of the table legs because, frankly, I'm not a fan of anything that has too big a whiff of "country" about it. (So you can imagine the depth of loathing I have for much of the Seasons stuff

Oh, and do note that the new white chair frame is different than EAxis's white. It's brighter, for one thing, though still not pure white, because I think EAxis's white is a tad...dingy. It's also "fixed," in that the EAxis chair frame has all these weird lines and (IMO) a bunch of too-dark shadows and stuff on it. I was going to be really lazy and just match the white table parts to the white EAxis chair frame, so that I'd only have to recolor the chair seats...until I noticed all those weird things on the EAxis textures that I knew I just couldn't let lie and...Yeah, here we are.

So, I ended up pretty much completely redoing the chair frame and then matching the white table parts to the new chair frame. I also fixed most of the shading on the table, too, which is just...um, weird in the original colors, if you look at it closely. Plus, some of the grain directioning is weird on the originals, so I fixed that, too. And then... Well, anyway, a lot of work actually went into this stupid little set, most of it piddly little things that probably no one but me will ever notice.

Because I'm nuts that way.

So, anyway. When all is said and done, what you can get in this download is:

11 table recolors, all with white legs and frame and varying color tabletops
11 chair seat recolors, to match the tabletops
1 chair frame recolor, which is a "fixed white" that doesn't have EAxis's weirdnesses.

I separated the table recolors from the chair stuff, so if you should want one but not the other for whatever reason, there you go. Both the chair seats and the frame recolor are in the same file, though, because it seemed kind of silly to separate them. As always, all the files are pre-Compressorized and are clearly named so that you can more easily get rid of the colors you don't want/like/need.

Use them in good health.