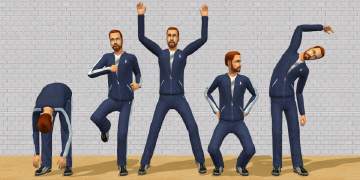 Created by Nopke
View Policy / About Me View all Downloads
Uploaded: 30th Jul 2021 at 8:46 PM
Updated: 1st Nov 2021 at 11:19 AM
This mod unlocks a non-autonomous workout interaction (that looks like the stereo workout interaction) for children and older Sims who have at least 2 body skill points or – in the noSkillRestrictions version – unconditionally. It can be performed anywhere by clicking on your currently selected Sim. This mod also adapts that interaction to features introduced in expansion packs: skill bonuses, body temperature, snow, plantsims, and enthusiasm. Despite that, it should still be base-game compatible.
Use only one version at a time. Statistics (in percentage points of bars per hour):It's an exact copy of the values used in the stereo workout interaction.

Use only one version at a time.

Latest updates of my mods
WIP mods – shared but unpublished

Support me on Ko-fi
Support Mod The Sims