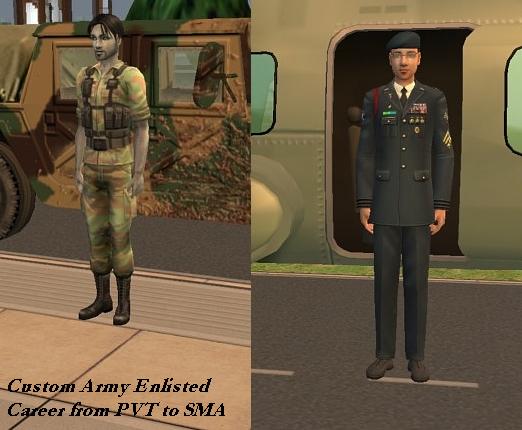 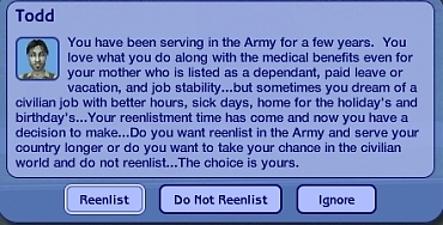 3,589 Downloads 744 Thanks  Thanks 51 Favourited 64,956 Views
Picked Upload!   This is a picked upload! It showcases some of the best talent and creativity available on MTS and in the community.

Created by senesi2003
View Policy / About Me View all Downloads
Uploaded: 29th Aug 2007 at 10:40 PM
I started making this career about a month ago with the help of my husband who has been in the Army for 13 years. I was going to quit working on it when I saw the same career posted just a few days ago, but decided to go ahead with mine when I realized the other was just the regular sim military career with a few minor changes.

This career is complete with real job descriptions (sample below) of each rank along with CUSTOM CHANCE CARDS for EVERY level (sample below). My husband helped me with each chance card to get it as real as possible for the sim’s rank.

This career also contains the Real job titles of Enlisted Soldiers. The only exceptions are the ones of the same rank that I didn’t use (not used: E4 Corporal, E8 Master Sergeant and E9 Command Sergeant Major).

The Pay is based on an actual monthly base pay then divided by 3., although, actual base pay depends on the number of years one has been serving as well as rank, so the Sim Base pay is different than an actual soldiers.

All Level hours are Mon.-Fri. 7am-5pm because most places we have been they start PT (Physical Training) at 7 am, then formation before being released for the day typically falls around 5pm. Although , if you are related to or know someone in the Army, getting released at 5pm is always a dream.

All skills have been applied to this career as well and a sim will have to accomplish the following to reach the top of this career.

It is a tough career for your sims, but I tried to make it realistic.

*EP Ready *Uses military career icon *has been tested in 2 separate games on 2 computers
*DOES NOT overwrite any existing games . *No custom clothing or cars (all Maxis stuff)

If you are interested I do have a base game only version if this doesn‘t work in base game, just PM or leave comment and I will post as well.

Please be gentle, this is my 1st career. Hope you like it and enjoy.

Have a Great Day and Thanks for looking!!!

Additional Credits: SimPE and MTS2 as always. And most importantly: Superfly for the awesome tutorials and links.
Other Information

Description: Sims of the world, men and women, are called for duty. On that duty they become one, they become strong, they become ARMY STRONG! The Army is calling you!

Description: Sims of the world, men and women, are called for duty. On that duty they become one, they become strong, they become ARMY STRONG! The Army is calling you!

I am a mother of 4 and a proud wife of a US soldier and let me tell you that job is one of the hardest out there. As a stay at home mom I realize I use my sims as some sort of escape for awhile. I love to recolor things and build as well as play the game. I am glad I finally started to post things and everyones kind words make me keep on. So I thank everyone for that.

You can use my skin, hair, makeup, clothing, etc. on your sim uploads just remember credit is nice.

Any recolor of objects maybe used in your lots, again credit is nice.

Please feel free to recolor any meshes I do make, but do NOT include mesh in your upload just link to mesh page, you MAY however us my meshes in your lot uploads, again credit is nice.

PLEASE DO NOT UPLOAD TO PAYSITES...MUST REMAIN FREE.

I am not taking requests right now. I am on a major break from creating unless it is something I recolored for my own personal use or a career I decided to make and share. So I just ask that anyone who has sent a PM and on a career request, just know I am not ignoring you, I am just not creating right now.