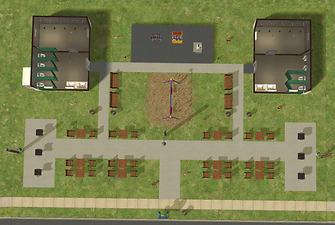 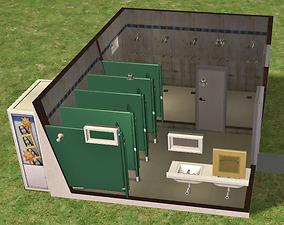 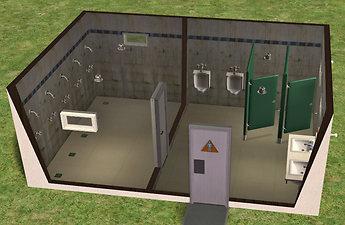 435 Downloads 61 Thanks  Thanks 3 Favourited 9,488 Views
Created by ndayeni
View all Downloads
Uploaded: 16th Sep 2007 at 12:24 AM
Updated: 30th Aug 2008 at 7:48 PM - updated filters
I created this lot for use in Ellatrue's Poverty Challenge. It is based on the idea of the rest areas that are found along many highways and interstates in the U.S., though includes more amenities than are typically found at such places. In keeping the rules of the challenge, the lot contains no skill or energy objects. Among the amenitites/objects that are included:

- Men's and Women's bathhouses with toilets, sinks and showers for Bladder and Hygiene. Also include a mirror, mostly for decoration.
- A small shopping area with a clothes rack and produce stand for puchasing clothes and groceries.
- A swingset and multiple gnomes and flamingos to kick for Fun.
- Several outdoor grills and tables for making hot dogs or hamburgers to fill your Sims' bellies.
- A photobooth for fun and for Romance (and other) sims to fulfill public (and ordinary) woohoo wants.

Ellatrue has been kind enough to give at least initial approval for this lot for use in the challenge based on screenshots I posted there. I will leave it to her to say whether it is "officially" approved for use or not, however, and will update this post to indicate if it is or isn't when I have heard from her.

This lot is NOT base game compatible, as it uses objects from the University and Open for Business expansions. Based on Delphy's compatibility guidelines, it likely requires Nightlife as well simply because the lot was made with Nightlife installed. I'm not aware of any other requirements to use this lot, however I do have all expansions and stuff packs except Bon Voyage installed, so have checked them as needed to be safe. No custom content has been used in the lot or included in the file. Price listed is the cost for a sim to purchase the community lot over the phone.