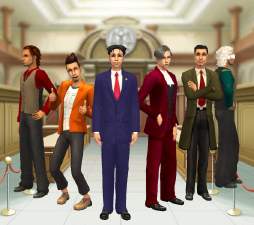 1,684 Downloads Quick download 336 Thanks  Thanks 69 Favourited 57,212 Views
Picked Upload!   This is a picked upload! It showcases some of the best talent and creativity available on MTS and in the community.

Created by Izz35178 View Policy / About Me View Downloads Home

This is a group (or half of a group) that I've been thinking about making since finishing Trials and Tribulations and then after playing the first one again I decided to go for it. It was a pretty quick project, mostly recolors, though I did make a mesh for Edgeworth and Larry. I intend on making the girls (Mia, Maya, Pearl, Franziska, and Maggie), but they're definitely going to take more time, so I'll probably do a couple more previously announced projects before working on them.

Some notes:
Phoenix Wright
- Maxis base game recolor. Found under Everyday and Formal for Adults. One of his trademarks is his spiky hair and while I was hunting around for anything remotely close I found SynapticSim's Wolverine hair looks similarly spiky.

Miles Edgeworth
- New mesh by me. Found under Everyday and Formal for Adults. I had a bit of a debate over his cravat and eventually decided to take a little bit of artistic liberties and made it a single layer of crinkly fabric since three looked excessive and I wanted to do the crinkly stuff over just texturing.

Larry Butz
- New mesh by me. Found under Everyday for Adults. Kavar's Razor hair works so perfectly for him I swear it was modeled after him.

Dick Gumshoe
- Recolor of a mesh by tomang. Mesh not included in download. Found under Everyday for Adults. Not as stocky as the good detective, but I don't change the builds when I create my own meshes either, so I decided this worked well enough.

Diego Armando/Godot
- Recolor of a mesh by tiggerypum. Mesh not included in download. Found under Everyday and Formal for Adults. Sorry for the minor spoilers. The visor Godot is wearing in the pic is SynapticSim's Movie Cyclops with mesh by funnyycats.

Mesh Policy:
Re-texture, improve, mutilate, my files as much as you want, just throw out a line of credit and keep it free.

Archive Information
This is a new mesh recolour, and means that you will need to download the particular mesh itself in order for this to show up in your game. See the Meshes Needed section or read the text for more information.
Archive: PW_theGuys.zip
File: MESH_izz_AMlarrysuit.package Mesh
File: MESH_izz_AMedgeworthsuit.package Mesh
File: 5f596f4a_PW_larrysuitAM.package Clothing Recolour

After some research I've simplified my policy further: enjoy and use my creations however you want, just keep it free!

Also, I do not take requests as I am entirely too flaky and fickle.