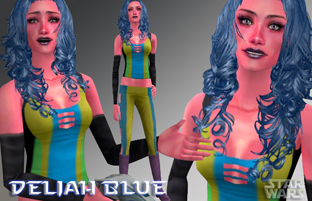 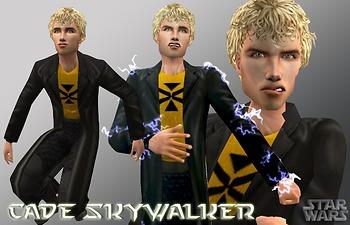 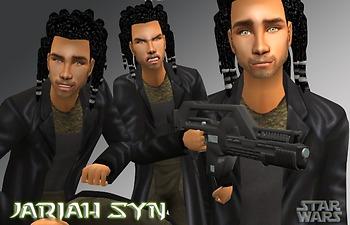 Created by aymo87 View Policy / About Me View Downloads Home

if you're having trouble getting the sims to show up, and need

do NOT leave a comment about it, odds are I will not see it there.


for Cade you'll need to get his hair here

Cade Skywalker
"You're a Skywalker, Cade! Act like one!" -Kol Skywalker to his son

Descendent from powerful Force users Anakin and Luke Skywalker and Mara Jade (...and Ben Skywalker too) Cade is the son of Jedi Master Kol Skywalker and Morrigan Corde. His father died when he was fourteen and the Sith attacked the Jedi Temple on Ossus. Opting to stay behind and fight, Cade was left for dead and later recovered the pirate Rav. In his time aboard Rav's ship he became close friends with Jariah Syn. The two later worked together along with Deliah Blue as bounty hunters, until a chance meeting with former Princess Marasiah Fel caused the group to get tangled in battle against the new Sith Order. While he has forsaken the ways of the jedi (leading him to be haunted by ghosts of his ancestors including both Luke and Mara Jade Skywalker) he is very strong with the Force, possessing ability to bring people back from the edge of death by dipping into the dark side of the Force.


Jariah Syn
"And Syn, I want them to go "Boom""
""Boom" is always good!" -Morrigan Corde and Jariah Syn

Bounty hunter, weapons expert, and 'close' friend of Cade Skywalker. His father was killed by a Jedi, causing Syn to develop a strong hatred towards all Jedi. When he finally learned Cade possessed Jedi abilities he threatened his friend with a blaster

Archive Information
Deliah.zip: Archive contains one or more files that are added twice (once in .package form and once in SimsPack form) (error 105)
Archive: Cade.zip
File: 81ac018f_49cd85c1.package Sim

Syn.zip: Archive contains one or more files that are added twice (once in .package form and once in SimsPack form) (error 105)