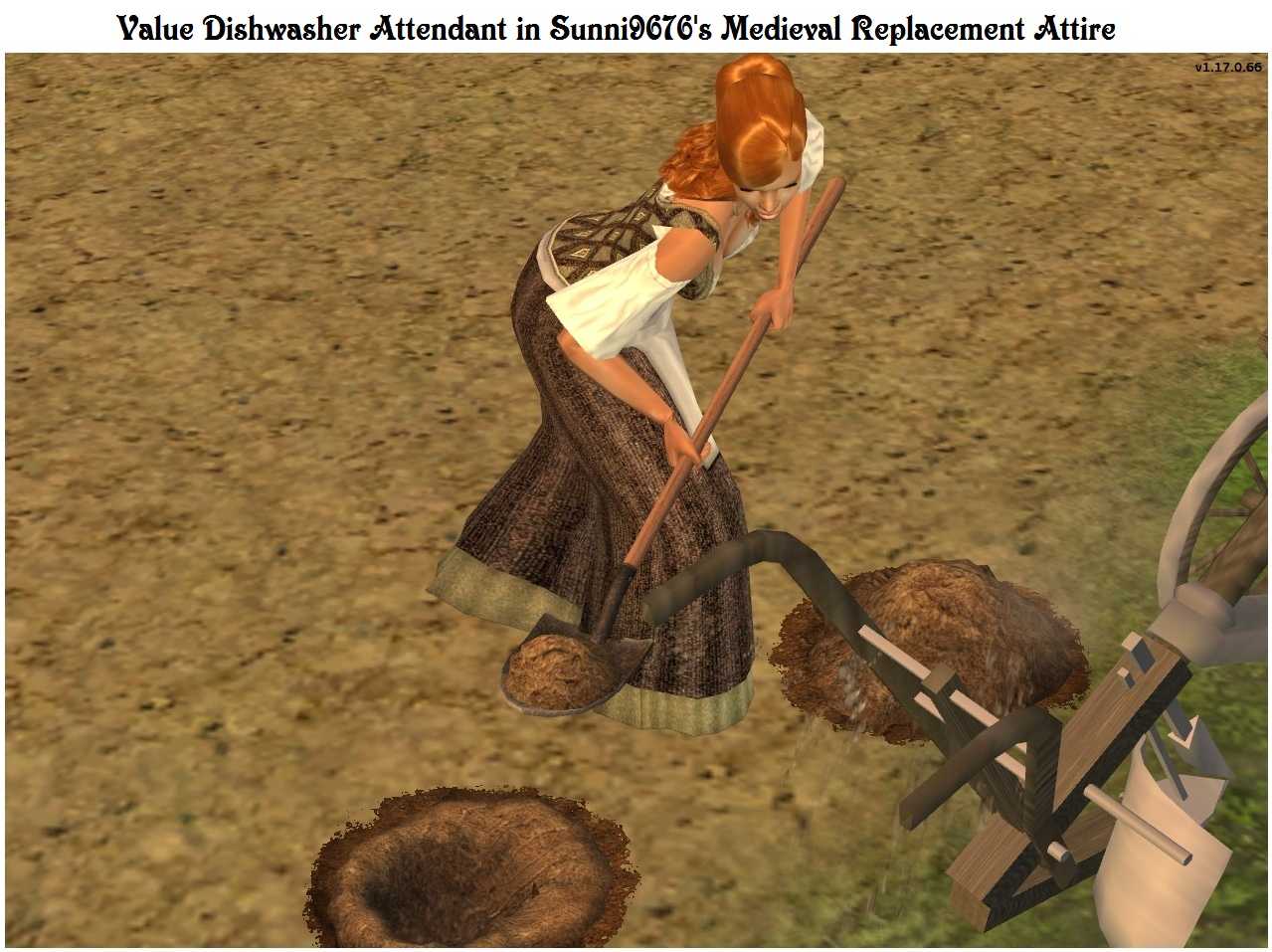 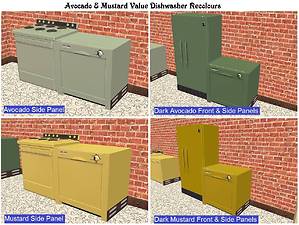 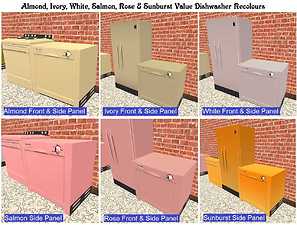 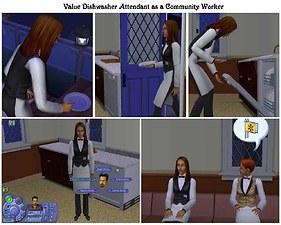 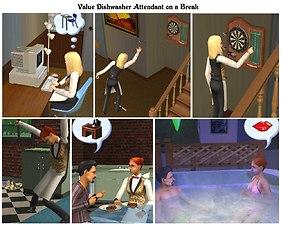 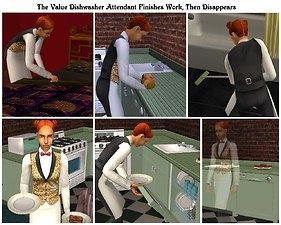 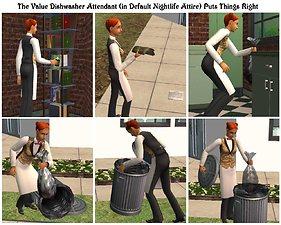 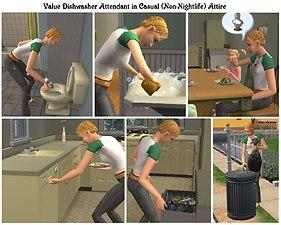 267 Thanks  Thanks     26 Favourited
This is a new mesh, and means that it's a brand new self contained object that usually does not require a specific Expansion pack (although this is possible depending on the type). It may have Recolours hosted on MTS - check below the description for more information.
Title: Economy Maintenance Free Dishwasher with Stealth NPC Worker & Recolours

1) Fixed the bug that sometimes caused a dishwasher NPC to accompany a playable Sim home uninvited.

2) Changed the coding so that the NPC worker first appears in on-duty mode.

3) When on a community lot, the worker does not enter social mode unless the player requests it.

4) The filesize was significantly optimized from 144 kB down to 18 kB.

2) To provide a set of 16 Maxis match recolours for this custom object and the EA economy dishwasher, particularly to replace the distracting stainless steel side surfaces.

3) If Nightlife or a later Expansion Pack, or any Stuff Pack, is installed, to provide a free NPC worker who loads the dishwasher and performs general cleaning duties on community and residential lots. Unlike my previous Dishwasher NPC project, by default this NPC attendant is programmed to appear only minimally, which may be helpful in complex lots, really small lots, and for those with slower computers. Like the previous download, this is also a hack-free project that does not create a new NPC, nor modify any existing game coding. 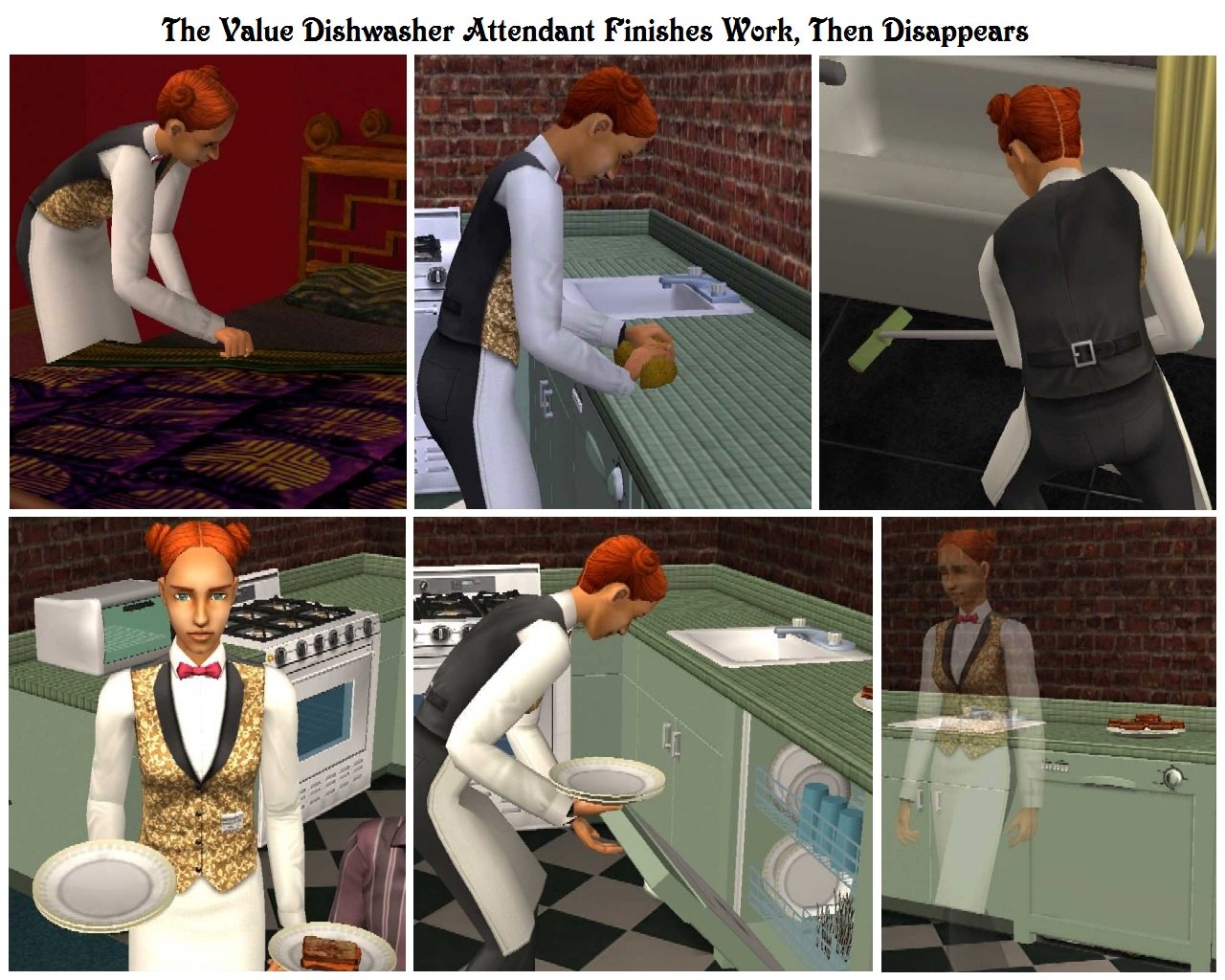 This custom dishwasher is slaved to the Basegame economy dishwasher, so any recolours available for the EA dishwasher are available to it. An invisible recolour is included within the package file for the convenience of lot uploaders. A total of six external front panel recolours are also provided, including the missing Almond colour to match the cheap electric stove, and five new recolours for a better match to the cheap fridge. More significantly, there are now ten optional recolours so that the side panels can match the rest of the dishwasher, to avoid seeing that unsightly stainless panel when the appliance is located in an end counter, or freestanding.

The dishwasher may be placed under a counter as usual, or can be used freestanding indoors or out. If placed on the same tile as a prop such as Ye Olde Cooper's Simple Bucket, the invisible recolour allows the dishwasher to fit in with pre-electrical or post-electrical era scenarios. Moveobjects On is not required for any of these usages.

I suspect that the dishwasher will often be used in invisible mode, so I made this appliance immune to failure, fire, theft and repossession. I also removed the shadows from this appliance to make it cleaner, especially for invisible use. 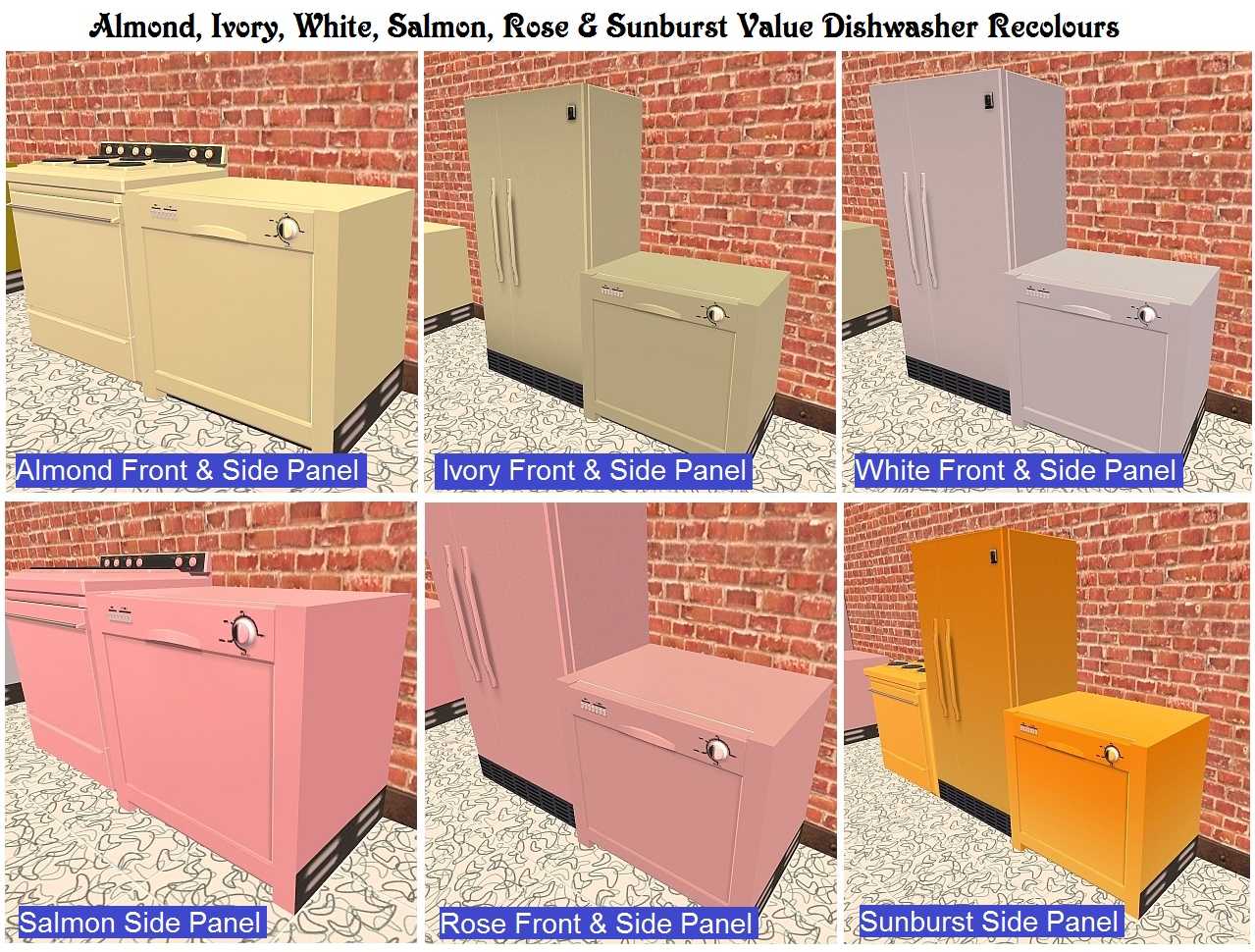 After about one game hour has passed, the NPC worker will become a non-selectable member of the household, and the worker's behavior will begin to differ significantly from the previous Dishwasher NPC project. By default, the NPC worker will only appear when there is work to do, otherwise the worker will remain invisible. This mode may increase game performance by avoiding the overhead of having an additional Sim in play. The disadvantage is that there will be virtually no opportunity for player Sims to interact with the worker. However, a Request Social Mode menu option allows the NPC to behave identically to the earlier project.

If the dishwasher is placed on a community lot, the NPC worker will default to stealth mode immediately. However, this default operation can be overriden by the menu options, as described later.

Either on-duty or off-duty, the performance of the NPC worker is exactly the same as EA designed it, because this project does not modify the NPC in any way. A restaurant server NPC takes care of the following items: used or dirty bowls and plates, dirty counters and stoves, dirty toilets, baths and showers, abandoned books and old newspapers, dirty pet beds and litter boxes, used trash buckets and trash compactors, puddles, ashes and trash piles, holes in the ground, unmade beds and upset garbage cans. Until one game hour has passed, the worker will not be able to go through locked doors. Note that some NPCs are more thorough than others.

The behavior of an an off-duty worker as a visitor or household member is somewhat unpredictable, but the NPC will naturally eat, use the bathroom, interact with fun objects and socialize. I have set the motive checking so that the attendant will not typically occupy a bed to sleep in, although some workers will nap on a couch.

M3g7e has discovered that if your Sims move out while the NPC attendant is active, the worker will go with them. When they move into a new abode the worker will have become a fully selectable member of the family. If you do not want this to happen, be sure to Dismiss the dishwasher worker before moving out. 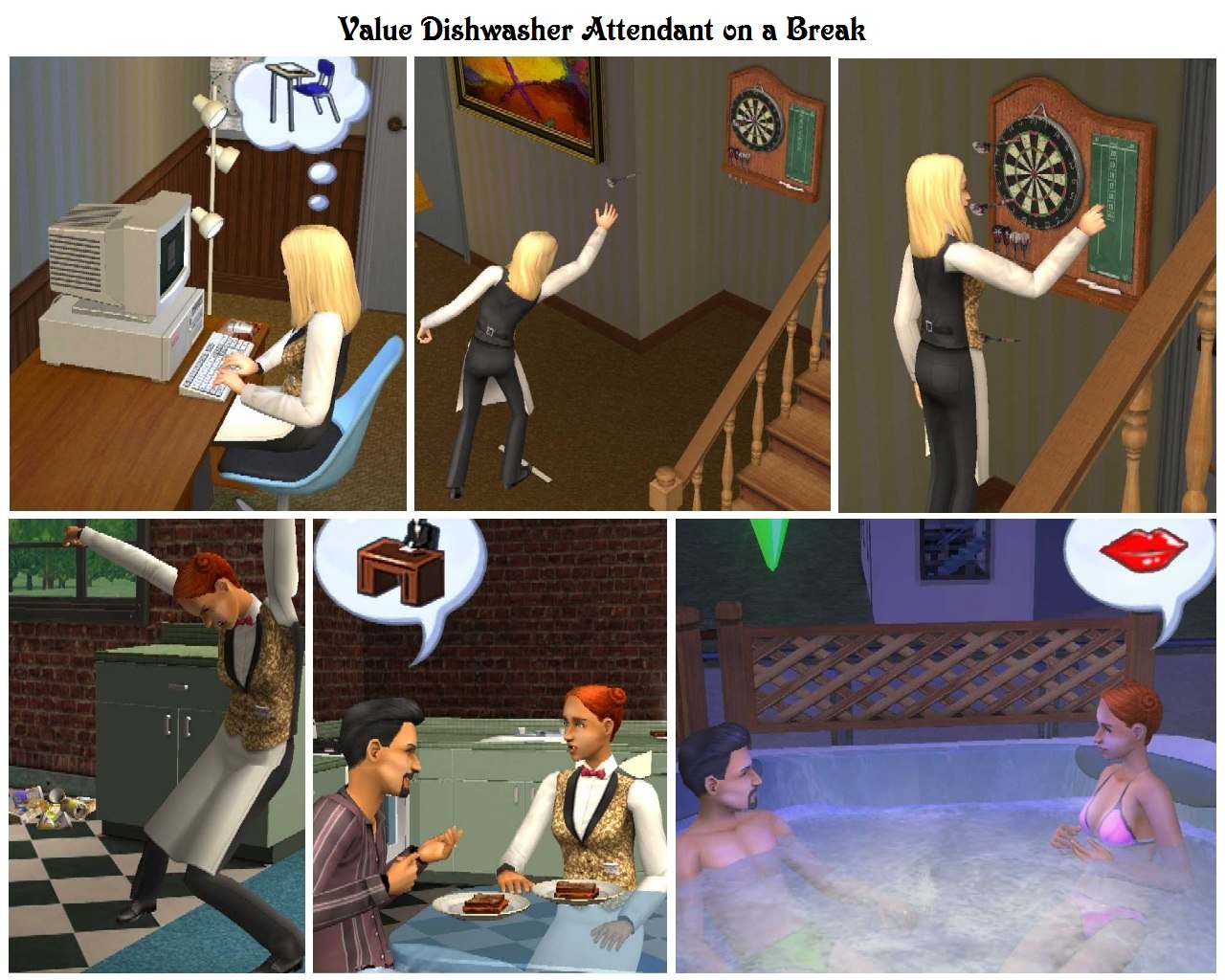 Although the appliance and worker will operate perfectly well without user intervention, there are up to five menu options available on the dishwasher if you wish to override the worker's automatic behavior, as follows:

Recall Worker - once the worker has completed the current activity (if any), and probably after a pause, the attendant will reappear near the dishwasher. If the worker is in the default "Stealth" mode, she or he will disappear again if there is no work to do. If in "Social" mode, the same worker will appear in either the on-the-job or resting mode, depending on whether there is work to do at the time the last check was made.

Relieve Worker - this option recreates the worker in rest mode, regardless of whether there is work to do. If the worker is already visible and off-duty then she or he will remain off-duty, without interruption. The worker will continue in an off-duty state until either Recalled, Replaced, Dismissed, placed in Stealth Mode, or the worker's motives fall to critical levels. Note that when in Relieved mode, the NPC attendant will not automatically return to work even if there are items to clean. This mode is ideal if you wish the worker to engage in uninterrupted social activities.

Dismiss Worker - if the worker is visible at the time, she or he will finish the current activity, then stand still and disappear. The attendant will not reappear unless specifically invoked by the Recall, Replace or Request Social/Stealth Mode menu options. While in the dismissed mode the dishwasher acts purely as a basegame maintenance free and noisless dishwasher, even when the game is saved and reloaded. But in the case of Community lots, saving is not normally possible so the worker will reappear each time the lot is visited.

Replace Worker - operates identically to Recall, except that the particular worker is replaced with another from the NPC pool. This menu option may be briefly unavailable immediately after a worker has been replaced.

Note that if a visible worker has been asked to stand still and disappear, any menu selections made are stored and only acted upon after the disappearance is complete. Depending on what the attendant was doing at the time, there may be a significant delay in response, but meanwhile the controller will continue to keep calling the worker until she or he actually disappears. 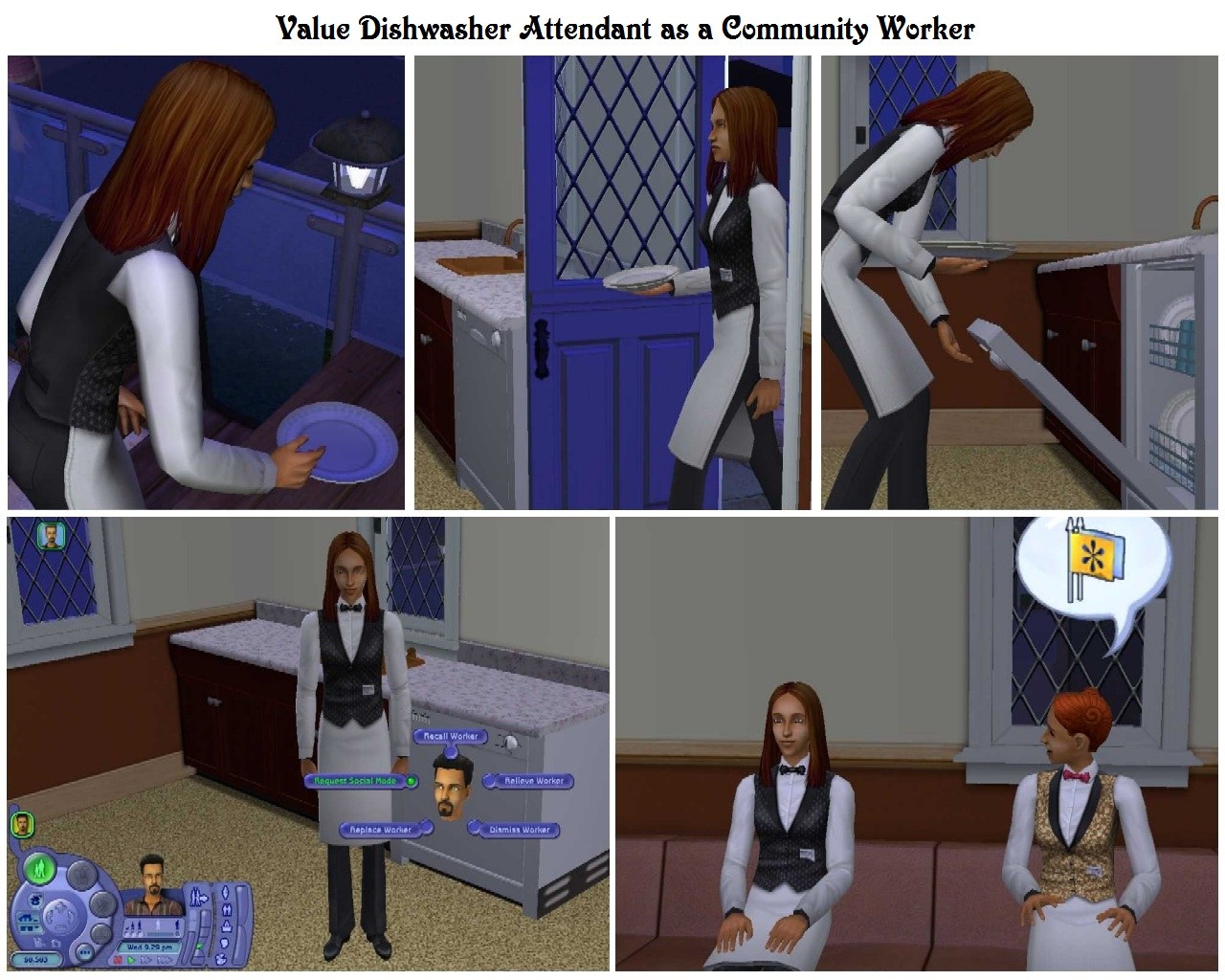 You may include this object in any uploaded lots, whether for free or pay. Please include a credit and link to this page. It would be nice if you sent me a PM with a link to your uploaded creation, but this is not required.

SimPE, PJSE, and CEP for Sims 2 object creation
Gadwin's PrintScreen for capturing complete screenshots that include the mouse cursor
IrfranView, Microsoft Paint and Microsoft Photo Editor for graphics file conversion, processing, sizing and titling
Numenor's AnyGameStarter, used for testing this project in several game environments
StephSim for general inspiration and the use her Gwrych March Stables, Barn and Forge community lot in the screenshots