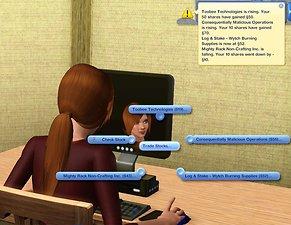 stock trading
After gobot101 asked about the related XML in the discussion forum, I found the EAxian stock trading system. It seemed complete and even has a couple computer interactions for a user interface. The StocksManager simply doesn't get started and the interactions don't get added to computers.

This mod kickstarts the StocksManager and adds the interaction to all computers. I also hijacked the list that stores the stocks to make it survive save&reload and altered the interactions to support localization. Since most of the strings were missing, I wrote them myself. I hope it makes sense to you. I asked a friend who knows financial stuff about the "speculative" thing in the code, and he couldn't quite make sense of it, so the whole thing probably isn't very accurate anyway.

The string keys for the stocks didn't give me any hints about the names, so I made up new names. The first one that everyone sees without looking up new stocks is "Llama United Inc.". One of the other stocks is named after the one who pointed me to the StocksManager and the rest is named after staff members. See if you're able to find out which ones.

Disclaimer: Sorry to everyone who didn't make it on the list. There are only ten stocks, so the possibilities were quite limited.

Heads up 1: The interactions only appear on expensive computers! I guess the intarwebz on the cheap computer aren't shiny enough or something.

Heads up 2: While the EAxian code is complete, it isn't really fleshed out or fine-tuned. Don't expect too much. I didn't do anything to flesh it out, have it make more sense or make it look nicer. Yet.

Heads up 3: The computer screens will stay black for the stock market interactions.

description:
Ok, Buy and Sell should be obvious, I hope.

Sims always have to discover stocks before they can invest in them by using the Check For New Stocks interaction. One stock will always be discovered in the beginning.

Discovered stocks that sims didn't invest in, will go hidden again after a certain time. A pretty short time actually. Also only four stocks can be discovered and investable at the same time. If you have four stocks discovered, you'll need to wait for one to get hidden again before you can search for a new one.

Finally, to see what happened with your stocks and the stock market in general, use the Check Stock interaction. See the attached screenshot for the related notification.

translation
This mod should be fully localizable. Tell me if you happen to find any empty buttons or notifications. If you are willing to support a translation, please read the instructions.


If you are willing to translate, download the source text file and edit it with a text editor. Please be serious about your translation. I don't have the means to check these translations for grammatical or orthographical errors.

Only translate the stuff between the <STR></STR> tags or you will break the localization. Leave the {0.String}/{1.SimFirstName}/etc. stuff unchanged. These are placeholders and will be replaced by the localization code, before the string is shown. You can freely move these placeholders to form sensible sentences though.

Parts like {MA.him}{FA.her} are gender-dependent strings. Translate the part between the point and the closing brace and leave the rest unchanged. You can freely move these around as well and add new ones.

Finally, please change the filename to something that indicates the language you translated to and upload it as attachment in the comments section of this mod. Please save your file in the UNICODE format (if you use Notepad, simply use "Save as..." and you will see a format drop-down menu below the field to enter the filename) and check the translation in-game after I uploaded it. Thanks.

possible conflicts
This is a scripting mod and as such the possibility for conflicts with other mods, no matter what kind, is next to non-existant.

installation
Please follow Game_Help:Installing_Sims_3_Package_Fileswiki. I can't explain it any better than that. Seriously, I won't even try even if you ask me.

deinstallation
Should be safe to simply rip it out whenever you want. If any household own stocks, these will be lost of course.

credits
Thanks to gobot101 for his question about the StocksManager XML in the stupid questions thread.

disclaimer
Might lead to a serious case of squished brain. Use for rocket fuel. Don't use for stomach ailment.
Other Information

Terms of Use
Feel free to do with my mods whatever you want. If you're a script modder yourself, feel free to rip my mods open and use whatever code you find useful; I might even help you if you ask me nicely. I like to be given credit as much as the next guy, but that's strictly optional. If you want to make an ass of yourself then plagiarize my mods for all I care.