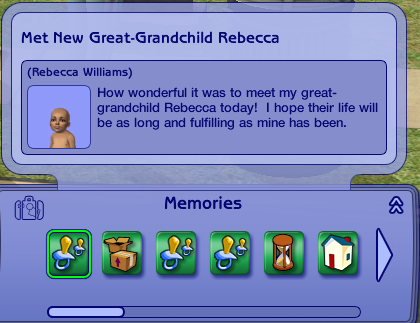 This should be compatible with all game configurations.

This hack consists of a custom memory object and a modification to BHAV 0x100B in group 0x7F1D0F49, which in the original game locates a new baby's grandparents and gives them the "Met New Grandchild" memory. It should only conflict with other hacks that modify this function for whatever reason.

Note about uninstalling the hack

Since this adds a new custom memory, before uninstalling it you should open your neighborhood in SimPE and delete all of the "Met New Great-Grandchild" memories from your sims, and then open the game and delete all gossip using the lot debugger.

Thanks to MTS user DiLight for providing a helpful tutorial to get me started, and to various other users who gave me ideas about the text to use for the memory.

For an extended definition of who the game considers "family", including family interactions between great-grandparents and great-grandchildren, see also my extended family hack!