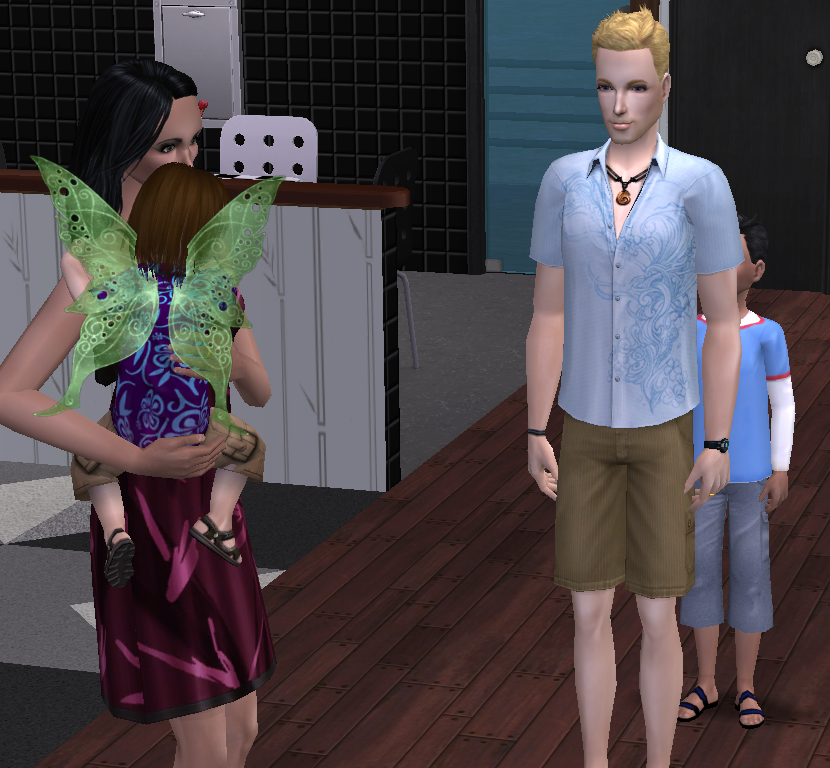 1,806 Downloads 67 Thanks  Thanks 21 Favourited 11,575 Views
Created by kestrellyn
View Policy / About Me View all Downloads
Uploaded: 4th Jun 2020 at 11:18 PM
Updated: 3rd Jun 2021 at 12:53 AM
Update:
MidgeTheTree on tumblr made a great fairy lifestate, and released a mod that makes supernatural states (including fairy) hereditary, but there were some improvements I wanted to make to that - and I also added the chance of fairy changelings occurring.

To actually have fairies in your game, you need MidgeTheTree's fairy lifestate and associated mods, which can be found here: https://midgethetree.tumblr.com/tagged/dl-fairies Note that, as of writing this, these mods do need to be updated to work with the changelings introduced in this mod. (Edit: All of Midge's mods have been updated!) There is a note at the end of this description for authors of other fairy mods about what needs to be updated for them to work. The only fairy mods that this mod actually requires are (probably) the wing overlay, and the hereditary supernatural mod, and it is also required that you have fairies set to be hereditary in that mod. You also need the core fairy lifestate mod if you want to make fairies who are not changelings, but if you only want changelings you don't actually need it if you have this mod.

By default, Midge's hereditary supernatural mod was fairly simple - two humans would always have human children, two fairies would always have fairy children, and a fairy and a human would have a 50/50 chance of either. Also, fairy children became fairies at the toddler stage, which means you could have a weird situation where a human couple puts a baby up for adoption, and then it is adopted by a fairy couple, and when it ages up to toddler it becomes a fairy because its parents are fairies, even though realistically it should be a human. Similarly, there would be issues with using Name the Father to change parentage. This mod fixes these problems, and also makes fairy genetics more interesting - there are now two genes that determine fairy characteristics, which are inherited in a Mendelian fashion just like hair and eye color. The first controls whether the sim has fairy wings. Wings are simply dominant over non-wings, like black hair over red hair. The second gene controls whether the fairy has access to magical abilities, but is more complicated than just being dominant or recessive - sims with two "magic" alleles will have access to all fairy magic, but sims with only one will have access to a smaller pool of less-powerful spells. Which spells they have access to can be configured in Midge's spell mod (or will be configurable, when it's updated) - instead of setting the "magical fairies" BCON value to 0 for off or 1 for on, now 0 means no fairies can use the spell, 1 means all fairies with at least some magical ability can use the spell, and 2 means that only fairies with full magical abilities can use the spell. The fairy magicalness gene also controls whether fairies can use pollen cloud pranks (all magical fairies) or talk to plants (only fully magical fairies).

When your sims have babies, with this mod there is a chance that the baby will be replaced by a fairy changeling. When this happens, the game will randomly choose two townies to be the biological parents of the child instead of your sims, and will give the child full fairy genetics. You will also get a dialog popup. Obviously how well this turns out depends on what kind of townies you have in your hood. If you have a low tolerance for "interesting" looking sims, you should probably create your own townies, or install some default face templates that you like. I am not sure what happens if there are no townies at all, but probably nothing good. If your hood does not have any townies, do not install this mod. (Addendum: This uses the same mechanism that the game uses to generate adopted babies (not toddlers or children) when there are no babies in the adoption pool, so if you are able to adopt babies from an empty adoption pool in your neighborhood, I believe this mod should also work for you.) The dialog that appears is technically generated just before the birth cinematic. You won't have time to read it or perhaps even notice it before the cinematic begins, but it will be there when it finishes. It may seem a little premature if you are playing without cinematics, but I wasn't able to get the dialog to come later without modifying a different BHAV that would have made the mod conflict with more things, and didn't think it was worth doing that just for the timing of a dialog. Also note that if your sim is having twins, either both twins will be changelings or neither will be - I wasn't sure how to get the game to have different sets of parents for each twin. The changeling baby/ies will not actually look different than other babies (aside from probably obviously having the wrong genetics), but when it ages up to toddler it will have wings, and as it grows up will gain all of the fairy powers based on which fairy mods you have installed.

The chance of a changeling occurring is by default 8%, but can be configured by opening the mod in SimPE and changing the "Chance of Fairy Changeling" BCON.

I am marking this as requiring Apartment Life, because I believe the hereditary supernatural mod (and the part of that mod that this mod overrides) does require Apartment Life.

This mod contains, and should completely replace, Midge's Baby Last Name Chooser mod, this functionality is also required for the changelings to work, so if you have that mod, you should delete it. This mod must load after Midge's core fairy lifestate mod (if you have it), the hereditary supernatural mod, and Name the Father. As previously mentioned, this mod required the hereditary supernatural mod and also requires that you mark fairies as hereditary in that mod. This mod is not currently compatible with Triplets and Quads. Other than those mods, this might conflict with other mods that change what happens when babies are born, however, it should be compatible with Midge's Birth Options. This mod overrides BHAVs 0x101F and 0x023 in group 0x7F1D0F49, text lists 0x12D and 0x130 in that group, and adds a new BHAV 0x1100 and a new BCON 0x1010 also in that group.

With the plantbaby update, it now also overrides BHAV 0x247A and text list 0x12F in group 0x7F01EC29, and adds a new BHAV 0x25C1 in the same group. Other mods that affect the same resources will conflict.

This conflicts with episim's baby personality mod. I have made a compatible version, which must load after episim's mod.

This mod contains two global BHAVs originally by MidgeTheTree, who has given me permission to include them here.


How to make fairy mods compatible with this mod

The main technical change to the fairy lifestate that this mod introduces is that a) there are now more ways to be a fairy than having Midge's object in your inventory, and b) the global BHAV 0x684 that determines fairyness now has a second argument, which indicates what fairy trait you are checking for. The possible values are 0 if checking for fairy wings/flying abilities, 1 if checking for any magic ability, or 2 if checking for only full magic ability. So, if your mod checks for fairy status, you should make sure it uses BHAV 0x684 and that it passes a second argument of 0, 1, or 2 depending on what your mod is interested in. If your mod creates fairies by putting Midge's object into their inventories, that does not need to be updated, as this mod considers sims with the object to be fairies and has them pass on fairy genetics properly.
Files Need help with downloading or installing content? Click here!