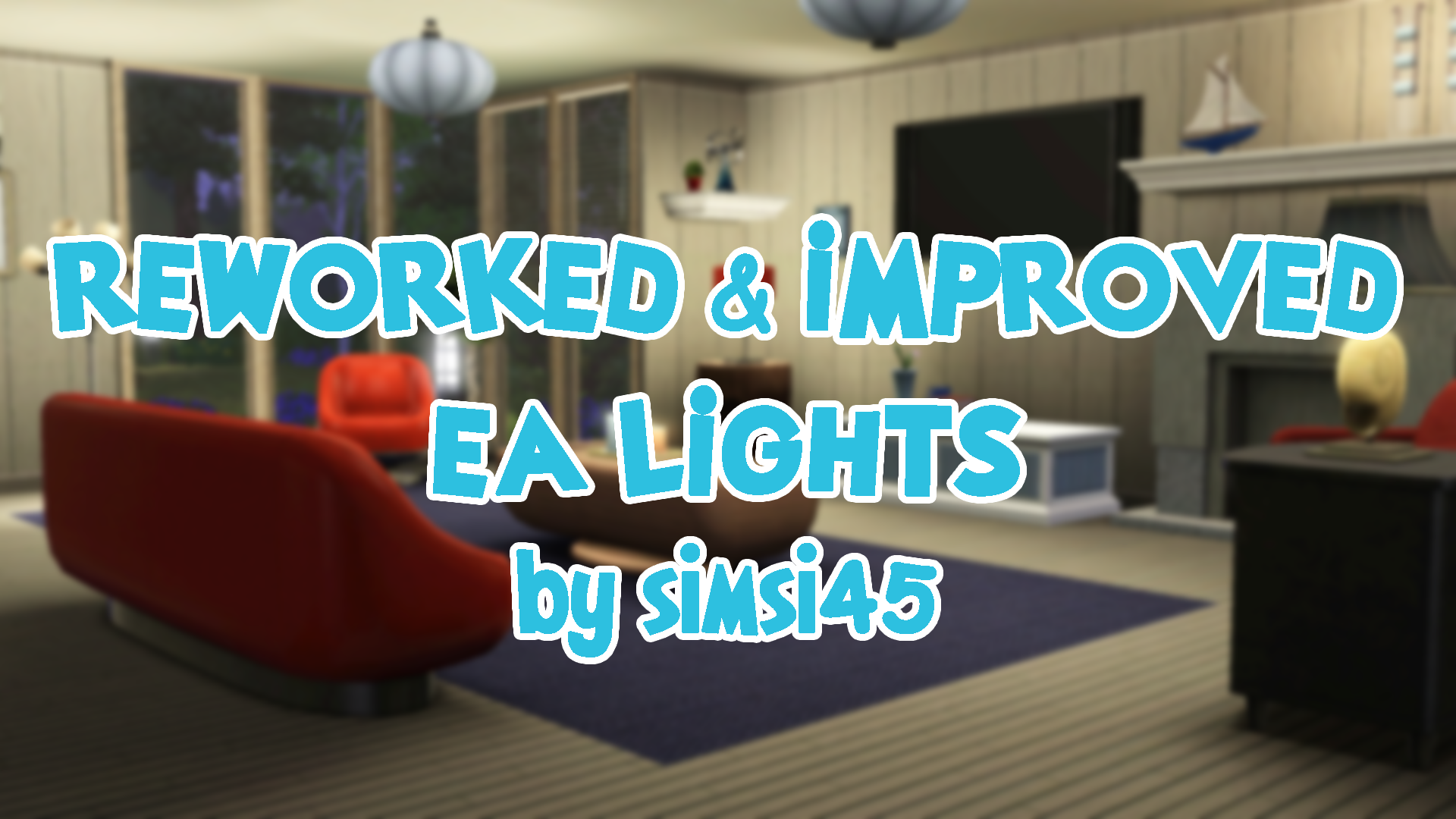 INTRODUCTION:
Today I bring you my "Reworked & Improved EA Lights" mod!
It's something that I wanted to make years ago but never got around to do it, recently I got back into TS3 again so I figured I might as well get it over with.

Now as much as I love TS3, one thing that REALLY annoys me is how crappy the lighting system has gotten over the first few patches. I am an individual that is very into good looking graphics and environments so this is one of my first attempts to try and fix as many of these issues as I possibly can, within the limitations of the game and the tools that are available to us. Unfortunately not much can be done in changing the core lighting system, as we still have no access to the shaders of the game so fingers crossed we can access them someday!

Each light/lamp in the game has a LITE resource associated with it, that contains parameters on how that light will be cast in the environment. Parameters such as the type of light, color, intensity, angle, falloffs, blur etc.
Now for some reason EA got lazy (shocker I know) and used the same default parameters for most of their lights. There are a few exceptions, but for the most part this resulted in most of their lights/lamps to cast light in a very silly (and often broken) way which made no sense.

For example a little candle shouldn't be able to light up the entire living room on its own, streetlights should be able to light up surrounding objects, covered lamps and spotlights should have directional lighting etc. These might sound like tiny details but I can assure you they really help in making the game a little bit more atmospheric and visually appealing. (to me at least)

WHAT HAS BEEN CHANGED?


NOTE:
This mod doesn't affect the overall game's lighting system at all (as it's not possible yet) this means that ONLY the lights included in this mod will be affected with the changes.
In other words, any CC or STORE content lights that you have in your game will NOT be affected or changed in any way, as their LITE resource hasn't been modified, thus they will use their original parameters.

With all that said, here are the basic key changes this mod provides in a nutshell:
[The pictures showcase what the lights look with and without the mod in their DEFAULT settings. You can obviously further customize the lights in-game as usual]

As the mod focuses on the lights themselves it can be used with various other lighting mods out there as they don't modify the same resources. My mod will only conflict with other mods that also alter the same LITE resources of the lights that are listed below (to my knowledge there's no other mod that does this)

As this is an override mod the changes SHOULD take action immediately even on pre-existing games. Eitherway make sure to DELETE your cache files just to be safe!

This mod includes ALL the LITE resources in ONE MERGED package file. I did this mainly to keep loading times to a minimum (as the more package files, the longer the game loads) so YES the mod functions properly even if you don't have all the packs mentioned below.


The following lights have had their LITE resource edited and WILL conflict with any other mod that alters that same resource:

POLICIES
- Do NOT redistribute as your own!
- Do NOT Re-upload my mods to your website/blog, without asking for permission first! (send a pm if you need to)
- If you intend to reupload make sure to post a DIRECT link to the appropriate MTS thread. No re-directs to third party websites, PPC networks etc.
- If you want to edit meshes, or create additional recolors of my conversions ASK FIRST! (either through PM's or comments)
- Of course you are free to use my mods in your lots, as long as you give PROPER credits. (a link to the original thread would be appreciated but not required.)
- Feel free to leave requests however don't expect me to complete them. I usually work on requests once I'm done with my personal projects.