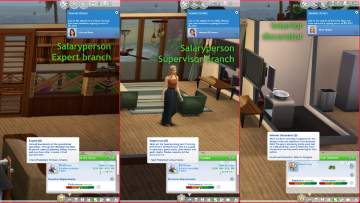 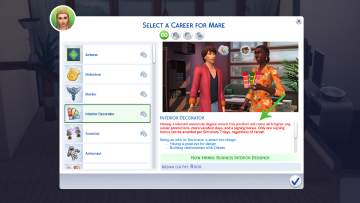 Created by shiorysm
View all Downloads
Uploaded: 18th Jun 2021 at 10:45 PM
Updated: 21st Jun 2021 at 10:39 PM
As the title suggests, this mod is a simple fix for two careers that were not properly added to the university reward system like the rest, namely the Interior Decorator and Salaryperson tracks.

What does it do?

Well, as I began playing Dream Home Decorator, I sadly realized the new career was not associated with any university degree. Even when according to the forum, the devs had intended to add it to the Fine Arts degree, so this was probably an oversight and might be corrected in a future update.

However I’m not good at waiting, and since I have no official confirmation regarding the info above, I decided to edit the game myself.

As such, this mod adds Interior Decorator as an associate career of the Fine Arts degree, so that any sim with this degree gets a jump start when joining the career track: they will begin at level 6 (if graduated from Foxbury), level 7 (if gradutated from Britechester or with honors from Foxbury) or level 8 (if graduated with honors from Britechester). They will also get a signing bonus like the other careers but exclusive to this one, proportionally based on the other professions associated with Fine Arts.

But unlike most careers, having a degree will not include a larger pay per gig. This is because of how gigs work in game, so this also happens with the Actor career: sims with a Drama degree get the same money per gig as sims without it.

It’s also worth noting that Interior Decorator won’t show in the list of associated careers for Fine Arts when sims are enrolling. It’s there, we just can’t see it. The rewards mentioned above will be present as sims join the career after graduation.

What’s the Salaryperson fix? These branches are already contemplated in Computer Sciences and Communications.

Indeed, but for some reason the game doesn’t have a signing bonus for these tracks like they do with the rest. So I added two new bonuses, one for each branch, exclusive to them. These are loosely based on the Business tracks’ bonuses, since Salaryperson is somewhat similar to it in the first place. Somewhat.

What about Paranormal Investigator?

My opinion is that, since this career has such a unique approach with needing a license and so on, it shouldn’t be part of the system. Also because the theme in itself is very different from everything else, as the medium skill is not contemplated at all in any degree. So I’m in favor of the decision (or perhaps unintended omission) of not mixing it with the university gameplay.

I might eventually make an optional file with Paranormal Investigator as part of the History degree (Get it? History and ghosts?) for those who want it anyway.

Yes. This mod edits the careers.career_tuning.xml file, and as such any other mod that does it as well won’t work properly with this one, like for example mods that add new careers. You’d need to merge the .package files in order to use them at the same time, for which you can find tutorials online!

Other than that, you will of course need Discover University and either Dream Home Decorator or Snowy Escape, or both, to make it work. I have only tested it in my own game, with every EP/GP/SP in existence (including kits), but as far as I know it should work just fine with any DLC combination. If it doesn’t, please let me know.

Lastly, since this mod doesn’t edit texts by itself, you can play with it in any language without issues.

Are you planning on updating this mod with new features?

If Sims 4 gets packs/updates with new careers that get excluded from the degree system, I will add them as well. And if the devs ever correct the Interior Decorator oversight, depending on how they do it (Salaryperson never got the signing bonus, after all), I will edit this mod as to not make it redundant regarding vanilla game files. We’ll see how it goes.
Other Information