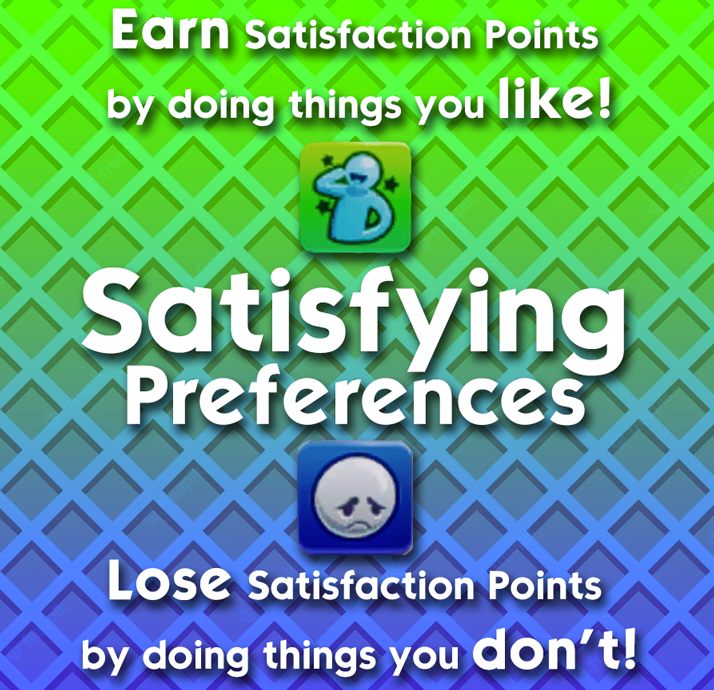 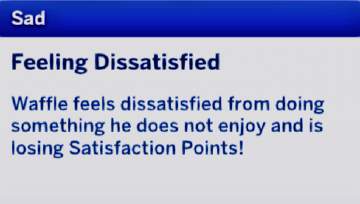 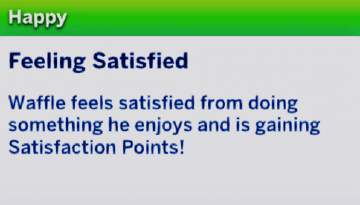 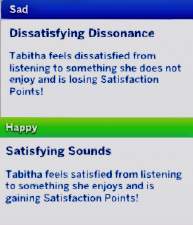 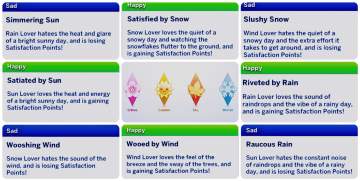 When your Sim has nothing to do, what do you tend to do with them? Maybe try to fulfill some Wants? Fill up some skills, work on work stuff...basically, just do a bunch of work?

What if instead, you could passively gain Satisfaction Points simply by doing things your Sim enjoys doing? I think this gives you a lot more excuses to do things for the sake of doing them, and not because you "need to" or because you "have to" for work. You're out and about at a venue and they have a Karaoke machine? Your Sim likes singing? Well now you're gonna be more likely to want to have them do Karaoke because even if their Fun is full, there's a benefit to doing it! These mods are both standalone- neither requires the other, and you can install only one if you'd like! This mod covers all packs but does not have any pack requirements!

If you use Carl's Gameplay Overhaul, there is an option to gain or lose satisfaction points each day based on your sim's overall mood that day. This pairs wonderfully with this mod, letting you make up the difference on bad days!

MUSIC ADDON
This update adds Satisfaction gain/loss when listening to music! Some things to keep in mind: 1. This behavior is active by merely being in the same room as music playing! You do not have to be actively listening to it. This is default behavior for music tastes.

2. As a result, this addon is a little overpowered. There is no easy way for me to modify the amount of gain/loss. 1 per minute is the bare minimum possible without a TON of work that I am not willing to do for this mod. So install at your own discretion. You can 100% sit a sim in a room with preferred music playing all day and earn 60 points an hour- which adds up, fast. Again, I recommend a reward store price mod if you feel you're earning too much.

This Addon is NOT REQUIRED to use the mod, and you can use the music version without the activities version if you'd like! You do need the main package file regardless. Details for this part can be found on my Patreon.

Seyjin has provided french translations which are now implemented into the packages!

Additionally, I've renamed the files to make them all appear together when sorted alphabetically. By nature of this mod's horrible naming scheme these can be somewhat confusing, but they make the mod much easier to find in your mods folder and the date at the end tells you which version you've got. PLEASE REMOVE THE ORIGINALS SO THEY DON'T CONFLICT WITH LATER UPDATES! WARNING: If you play this mod with MCCC and/or TwistedMexi's Better Exceptions, you will occasionally get an exception mentioning whim modifiers that can be attributed to this mod. Unfortunately this is the result of what appears to be a messed up in-game function, and there's so far nothing that can be done about it (myself and another modder using the same function have tried). The LE can be safely ignored, but if you're doing mod diagnosis and trying to find problems, remove this mod first to avoid false positives.

STAY TUNED: I will also be updating this mod to include custom likes from other mods with the creators' permission!

Lot51 for the original script, which was actually intended for another mod entirely and just happened to be exactly what I needed, Carl for help making another version of it to get everything working 100%, and everyone on discord helping me through all the confusion I had making this work like Frankk, LeRoiDeTout, MizoreYukii, and probably several others I'm forgetting. This was my first big project mod and I learned a lot and needed the help for sure!
Other Information

Type:
Additional Functionality: Mods which add brand new functionality to the game
Other

But you MUST have the associated .package files.