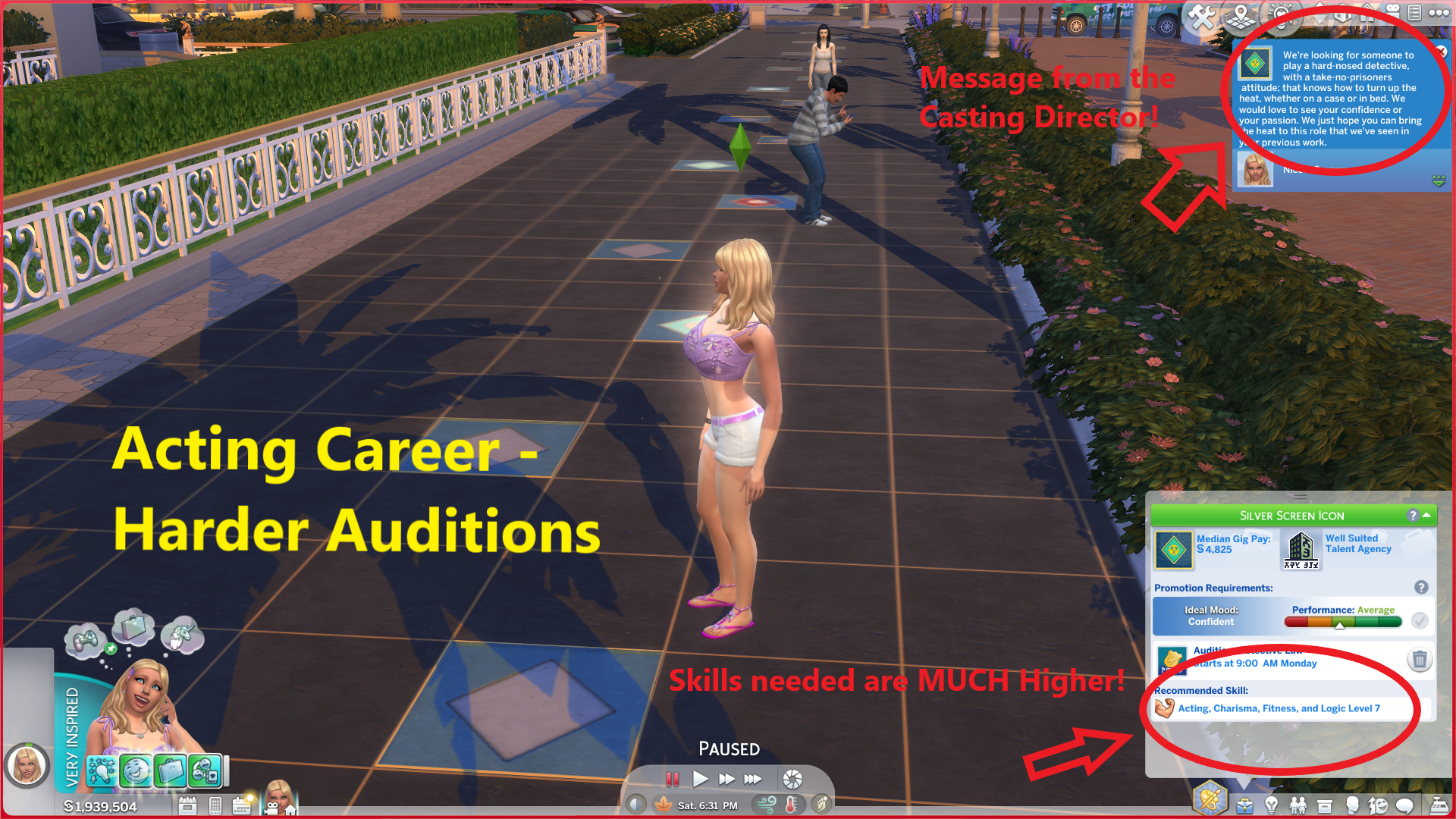 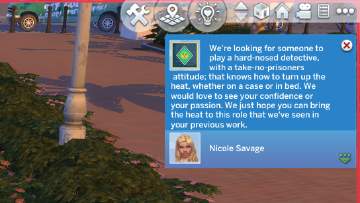 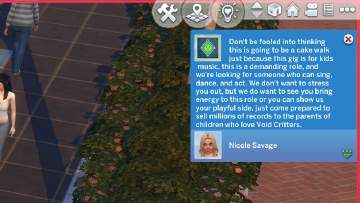 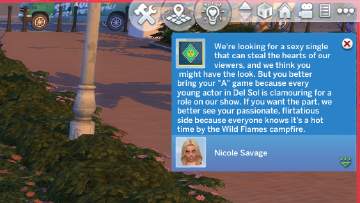 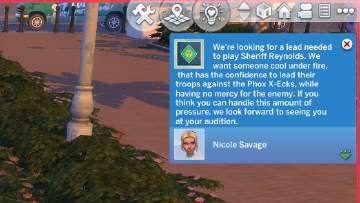 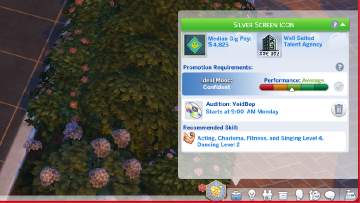 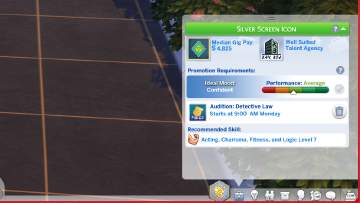 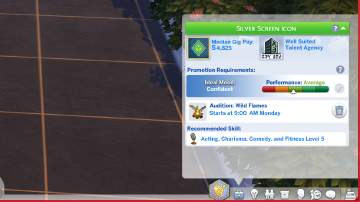 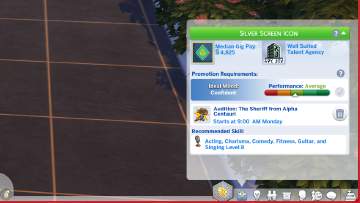 694 Downloads 21 Thanks  Thanks 7 Favourited 2,565 Views
Created by EynSims
View all Downloads
Uploaded: 8th Sep 2022 at 11:04 AM
Updated: 10th Sep 2022 at 4:45 AM
I am proud to announce that the first mod in my Acting Career overhaul is complete. It took a little bit longer that I had planned, but it is finally ready to be released. I am only releasing my mods on modthesims.com (and it's sub sites) and eventually itch.io, where you can donate to help me out in completing this overhaul quicker, so if you see them anywhere else, please let me know on this thread. Thank you.

I decided to do this mod after being inspired by Kuttoe's amazing Career Overhaul and then when I did some testing with the "No Skills, No Problem" scenario and even though it was a small sample size, I can tell you, the acting career is way too easy. My sim auditioned for 13 gigs (3 Commercial and 8 Daytime TV, and 2 Primetime TV), passed 10 of them (2 Commercial gigs, 6 Daytime TV gigs, and 2 Primetime TV gigs) and earned 6 golds and 4 silvers. She was also been promoted to level 10 and is a now 3 star celebrity, all with literally NO skills. This is where I stopped my test because at 3 star fame you unlock the "Established Name" perk which allows you to skip the audition and go straight to the gig. So now, after about six months of work, here is the first part of the planned 3 part (hopefully more) overhaul.

As I stated previously, auditions were entirely too easy. Why is this exactly? Doesn't the game restrict if your sim can pass the audition or not? Well, yes and no. How the game determines if your sim passes or not is a set of skill tests and multipliers compared to a preset threshold. So what I needed to do was fix that comparison. How I have done this is changing the threshold for the recommended skill level for each audition. In the Get Famous EP code, each gig has one recommended skill and a recommended level for that skill, but these are only thresholds, which means you get a bonus if you reach the recommended level and that you could be penalized for not reaching the level, but you may not be and even if you are, you could still pass the audition under the right conditions. The EP06 thresholds are as follows:

These are just for the skill that the gig audition recommends, for instance the "Voidbop" commercial skill is level 2 fitness, the "Critters of Mauven Forest" TV show is level 3 guitar, the "ZBB: Apocalypse Rising" TV show recommends level 5 fitness, even though you do play guitar in the gig, and finally, the "Captain Sigma: Olympus Landing" movie recommends level 7 fitness. What that means is; none of the auditions require any skill level at all, per se, only, you receive bonuses for going over that level, then, as you get harder auditions, you take penalties for not reaching the recommended level. Also, the Acting skill is never referenced at all. Your sim is not rewarded, required, recommended or even penalized for their acting skill level. This mod changes that. So far I only have one difficulty level for the auditions, but am willing to release a second, more difficult edition, if there is interest.

This version called "Auditions are Harder" will have the following thresholds:

No auto-fails at any level


If there is the interest, the second version called "Auditions are Brutal" will have the following thresholds:

Also, I have added more recommended skills to each audition. Acting, charisma and fitness have been added for every audition. I will also be adding skills that I feel fit the prep actions and gig actions, like mischief, logic, singing, and dancing to the mix. I know that singing and dancing were introduced in other expansion packs (City Living and Get Together, respectively), so I will also have different versions available for what ever combination of packs you own.

So, to explain that a little clearer, this mod will always require Get Famous, of course, but there will be a version that will be for if you own also City Living as well as one if you own Get Together and one if you own all three expansion packs.

In addition to the skills, currently in the game, each audition gives a bonus reward to your sim for being in a "Confident" mood and 8 of the 21 auditions give your sim a bonus for being employed by the "Everyday Extras" talent agency. These two things are the reason my auditions during my tests were so easy (77% success rate), even without skills, as there is no floor for immediate failure and a confident mood gives me a 2x bonus and the agency bonus is 1.5x, so as long as I accepted the correct gigs, I would continue to pass auditions, without any skills.

What I've changed here is, I've given each gig it's own recommended mood for the audition, for instance an "Energized" or "Playful" mood would give a boost for the "Voidbop" and "Critters of the Mauven Forest" gigs; while a "Flirty" mood would give a boost for gigs like "The Urbz" and "Residency of the Heart", which both include flirting and kissing scenes. I also gave penalties for certain moods. Your sim's mood affects "Risky" actions while on set, why not at auditions as well? Now, I haven't changed the fact that you get a bonus for being "Confident", only made that bonus smaller and possibly less than other moods.

Additionally, I have (with the help of the amazing TurboDriver!!!) added a text message your sim will receive once they accept a gig, that will have a cryptic hint as to what mood that will give the biggest bonus at the audition. If there is any spelling or grammatical errors that you see, please let me know and I will be happy to address them in an update. I have tested extensively (about 2 months) to make sure there were no problems, but I still may have missed something.

Finally, the last addition I made was, making it so all four agencies give you some sort of reward or penalty, not just Everyday Extras. You get a boost from the GRAN agency if you try out for a historical gig, like "Tournament of Honor" or "Melodies of the City" but take a penalty on those same gigs if you're with AI Staffing. Also you get a boost for a commercial or Daytime TV audition if you're with Everyday Extras, but take a hit if you're with Well Suited (the most prestigious agency), as the casting director thinks you're over qualified for the gig.

There may be other changes that I make to this mod, but as for now, I like the difficulty and variation it has added to the Acting career and hope you guys do too. Again, if you try this mod out and still think the career is too easy, or you just want a more difficult challenge, please let me know and I will release the Brutal version as well.

Finally, if you see any mistakes I have made, like a grammatical or spelling mistake or recommending a skill that you are unable to gain, please let me know. Also, if you are interested in translating my new strings into another language, please let me know and I will be happy to send you my work so you can localize it.