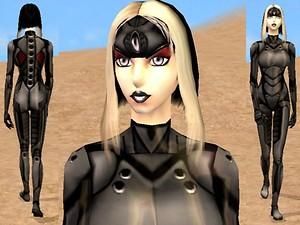 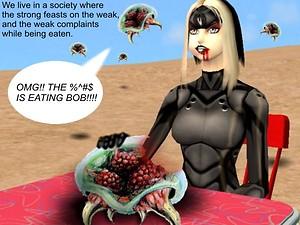 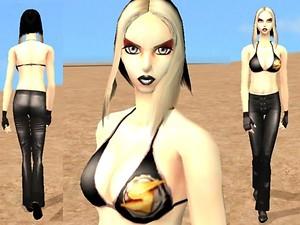 Created by thunderbreak
View all Downloads
Uploaded: 18th Jul 2005 at 6:22 AM
Hello everyone, it's been a while. Recently I've been busy catching up with movies and games, played lots of Metroid Prime 2 and Conker L&R

. Anyways, Fox234 mentioned about making Samus earlier, and I was thinking over and over about making her, after days of sketching and bitmap editing here she is; the main character of Nintendo's Metroid series, the invincable bounty hunter Samus Aran, correct me if I'm wrong, but I think she's the very first female character that's not in a game to be rescued, and that alone is worth noticing. Metroid series has been very inspiring to the gaming idustry. Super Metroid is my favorate without a doubt, it's twisted, it's fun, and it's probably got one of the most dramatic last boss fight in platform game history (no spoilers, you have to play it). Metroid 2 is my second favorate, the game use to give me nightmares(I was a stupid kid back then

). The GBA Metroids were pretty decent too. On the other hand the GameCube Metroids are something different. I really don't mind the first person aspect of the game, however if they are gonna make it a first person shooter then they should have used a first person shooter's control, half of the time I got aliens chasing me and I can't turn around, I have to stop and spend a year turning around while the alien is wacking me with crazy weapons. The auto targeting system is weak too, sometimes the enemy is right in front of you and you can't target them. Also the bosses are just plain annoy, they are not hard, just annoy. Like the spider ball boss I'm playing right now :blah: . However even with these inperfections I'm still having a blast playing the games. I usually hate FPS games because they are so repetitive, but Metroid Prime series kept the platform concept and have so much stuff to do and puzzles to solve.

This time I made 2 versions of Samus, one is the armor I designed, and the other is ol' Samus with her armor removed(secret in the original Metroid and Zero Mission). I wanted to learn how to make shiny clothing so I can make Samus' armor, but it seems that RGiles is still on vacation, and in that mini tutorial thread he mentioned something about clothing requires a few more steps, and being the idiot that I am I can't figure out what those steps are. So if anyone can offer some tips it'll be very appreciated. As an alternative for now I downloaded Rosco's shiny recolor, you don't need to download his recolors for Samus' armor to work, but here's the link if you are intrested in his shiny catsuits.
http://forums.modthesims2.com/showthread.php?p=217309
The rest of the custom contents are all made by me, that includes make-up, eye color, hair, skin, clothing, and face model. I'm sorry that I can't make Samus with her big "Hand Cannon", but I guess nothing is perfect

. To the people who DOES NOT have University, use Clean Installer to install Samus. Here's the link to the program.
http://sims2pack.modthesims2.com/index.php?page=3