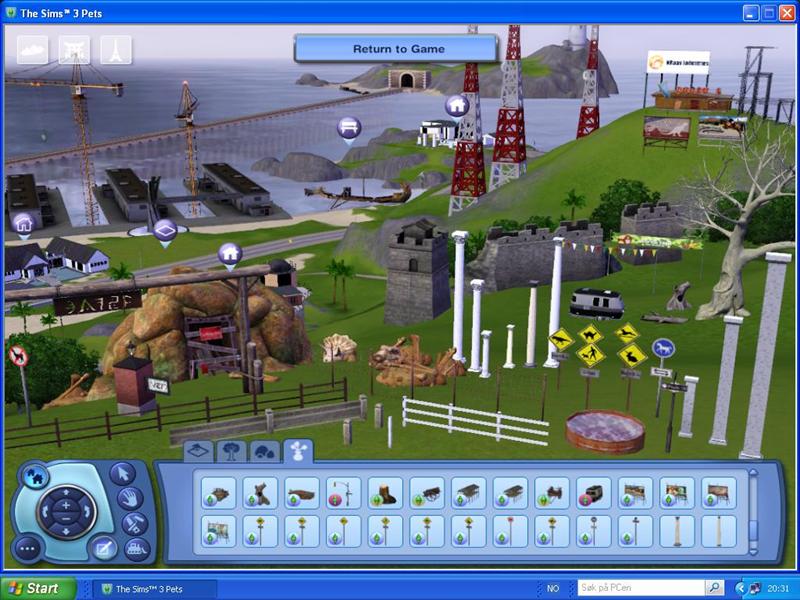 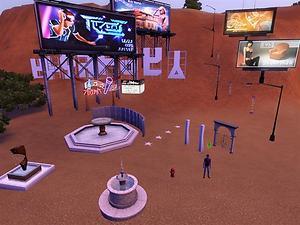 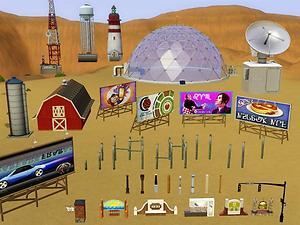 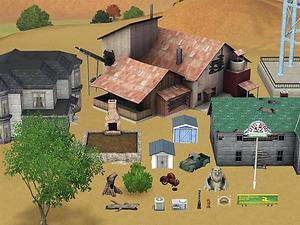 1,178 Thanks  Thanks     318 Favourited
Picked Upload! This is a picked upload! It showcases some of the best talent and creativity available on MTS and in the community.
This mod places 172 EA objects in the World Editor, for use on the world lot. The World Editor is reached through Edit Town, the WE button, where new lots, trees, etc. can be placed. There are 11 new items in Rocks, the rest are Landmarks. (All of the EA items originally in the World Editor are still in place.)

Mod uses only the OBJD on each object, this is a default replacement or override on these OBJD resources, the remaining resources needed for an object are not included. Therefor, if you are going to use, for example, the Late Night objects, you need to have Late Night installed; same goes for the other EP's.

A view towards the Sunset Valley lighthouse shows some of the items in this mod: Most items are also placed in Buy Debug under Misc., for placement on lots. Exceptions are items which are too large, or mouse cursor weirdness making them impossible to place. Some of the outdoor lights and the fountains are already available in normal Buy Mode, so these are not duplicated in Buy Debug here.

Following is a list of the objects included:
Base Game:

This mod is split into 5 different .package files, one for base game and one for each of the EP's. As an example, if you have Base Game, World Adventures, and Ambitions but do not have the other EP's, install the Basegame, WA, and AMB files, and forget the other 2. There is also a file titled All In One, which is all of the OBJD's in one .package file, so if you have all the EP's this file can be used instead. Do not use this All In One file together with any of the others, obviously.

There is nothing from Generations or the stuff packs here, as there were no objects in these which could be used that I've found. I have the number 1.29 on my files, which is the current patch level. This is intended as a time stamp meaning: This mod was made around the time of the 1.29 game. So users will know when this mod is from, if looking through all their old downloaded stuff two years from now. I'm sure this mod will work fine with the 1.26 game, or earlier game versions, as long as one has the World Editor functionality (and applicable EP's).

Other mods which may alter the OBJD, as a default replacement override, on any of the objects listed above cannot be used at the same time as this mod.

CAUTIONARY NOTE: Concerning the bridges; once placed on the World Lot, the hand tool refuses to pick them up again, so they are stuck where you've placed them. So don't place them from the World Editor unless you mean it. They also don't function as "real" bridges, sims can't walk on them or 'teleport me here' onto them. They were simply intended as some weird deco. The two bridges in BuyDebug can be picked up again and re-placed or deleted when using these on community or residential lots. Thanks to Scarity for pointing out this bridge placement problem.

A new file is added with objects from Showtime; this EP is required to use this new mod. The All In One file has not been altered, the Showtime objects are not in that file. All objects are in Landmarks in the editor, and are in Buydebug unless they were already in normal Build/Buy mode. The gates can be used together with the fencing in the earlier mods, but the gates won't actually open or close. Sims can still walk through the gates though. OBJD's used are:

A new mod places 21 objects from Supernatural in the World Editor, and also in BuyDebug Misc. if they are not available by default. The signs, trees and column are in build/buy already, so these are not duplicated in BuyDebug.

This mod uses only the OBJD on each item, so Supernatural must be installed to use this mod. OBJD's used are:

Additional Credits:
Created with the use of S3PE by Peter L. Jones.

See: Game Help:TS3 CC Basicswiki for a full guide!
Back to download view
79 Comments / Replies (Who?)