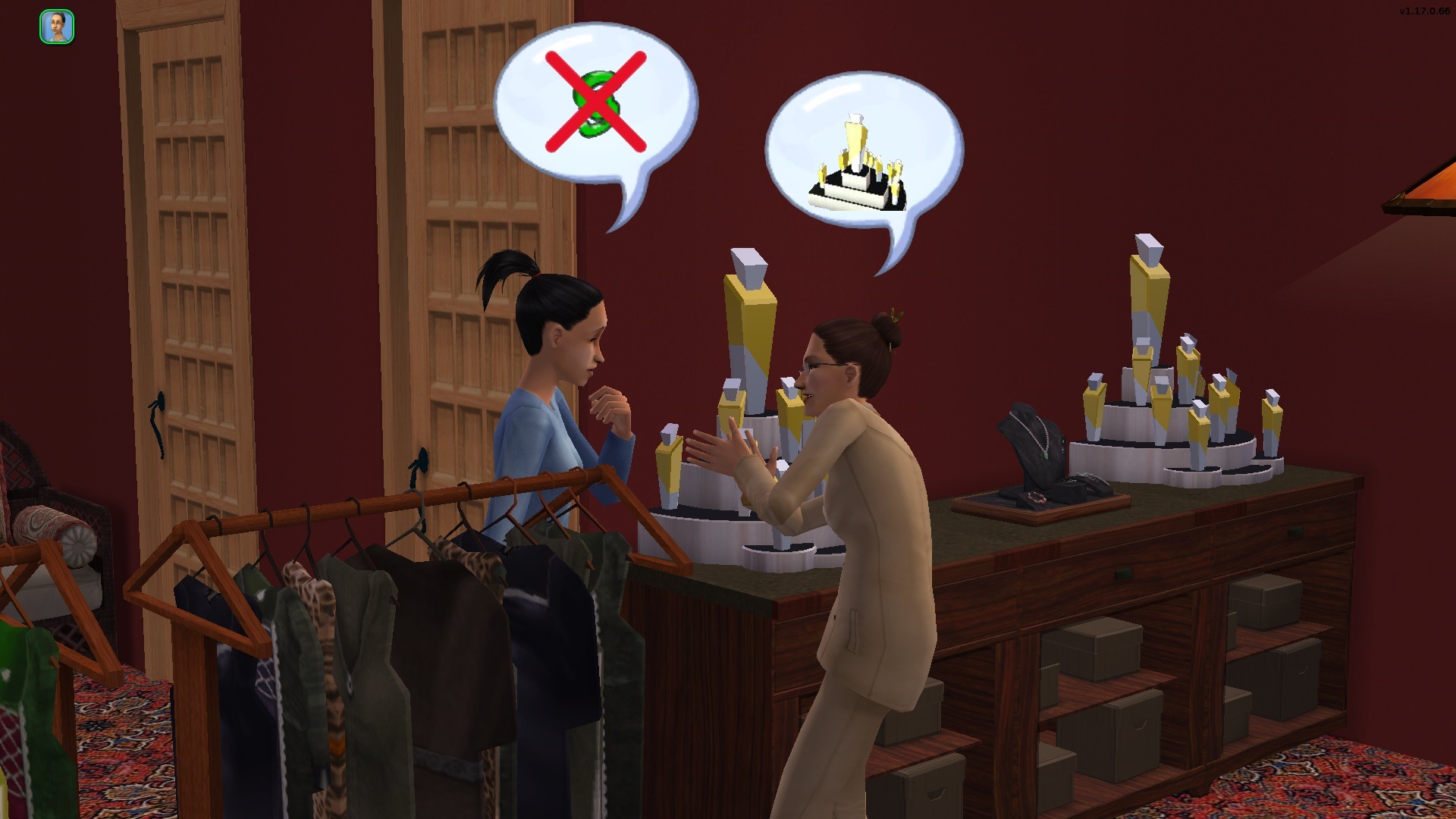 UPDATE 10: Fixed an issue that still made the game reset the buy bar if the price of the object was lowered from a very high value.

UPDATE 9: This update fixes a Maxis oversight which resets the customer's Browse bar when a salesperson successfully performs an Offer at Cheap interaction towards the customer.

UPDATE 8: This update makes it a bit more likely for townies to have money.

UPDATE 7: When a Townie who can't afford a dining podium, ticket machine, salon chair etc. starts browsing these objects, instead of immediately stopping, they will continue browsing for a while before deciding to stop or leave.

UPDATE 6: I have taken the Order Coffee/Drink features out of this mod and incorporated them into my new Business Mod. I highly recommend you download Business Mod if you have this mod.

UPDATE 5: Sims who can't afford to buy a drink from a bar, or coffee from an espresso stand won't be allowed to buy any more. I have released a new mod called Bar Espresso Cost Mod which I recommend you download if you have Townie Budget Mod.

UPDATE 4: This update makes it a bit less likely for Downtownies, socialites, vacation tourists and so on to have too much money.

UPDATE 3: Townies on non-OFB community lots won't try to dine or get a make-over if they can't afford it.

UPDATE 2: Sims who can't afford dining or a make-over or a ticket machine can now browse the items for a moment, but then they will realize they can't afford the item and will stop browsing. If the item is a ticket machine, the customer will leave. If it is a dining podium, they have a chance to leave. This is how it already works for poor, playable sims, so it now works the same for townies, too.

Open for Business's business-related features are made completely irrelevant by the fact that non-playable sims are considered to be able to afford any object at any price. When you establish a business, you know that your business will be a success even if every single playable sim in your game is poor, because you know that there are numerous townies who will visit your business and be able to buy anything. This is a serious issue.

This mod adds a new feature to the way the game determines whether a sim is able to afford an object. Now, townies are not immediately considered to have infinite funds. Whenever a townie visits your business, there is a chance that they may not have the required funds to afford anything at all, that is they will be there to just browse. This feature already exists for playable sims who don't have the money to afford, and now this feature is also enabled for townies. In addition, every townie now has a money limit, that is, you can't sell townies an object that is priced at something like a hundred thousand simoleons, which is something you can do in the unmodded game, and I consider this to be an exploit. Here is how the mod works:
- Regular townies, NPCs, garden club, vacation locals and gearheads are very unlikely to buy anything. If the game allows them to buy anything at all, they will only be able to buy cheap stuff.
- Bohemians and Jocks are a bit more likely to buy, and afford more expensive stuff.
- Techs, Professors, Coaches and Reporters who are on the job are even more likely to buy, and afford even more expensive stuff.
- Downtownies, socialites and vacation tourists are the most likely to buy, and afford the most expensive stuff.
- The Diva can always buy stuff, and can afford very expensive stuff.
- Grand Vampires are also able to buy at all times, and can afford expensive stuff.
- Slobs will never be able to buy or afford anything.

If a sim can't afford anything, they will start loitering your business. This is also how it works for playable sims who can't afford anything. This means that businesses will become more lively places. You will definitely want to establish your business in Downtown, so that you can have Downtownie customers. I highly recommend you combine this mod with my Bills Mod which adds business tax to the game and makes living in Downtown more expensive, so that you have to think twice before you establish a business in Downtown.