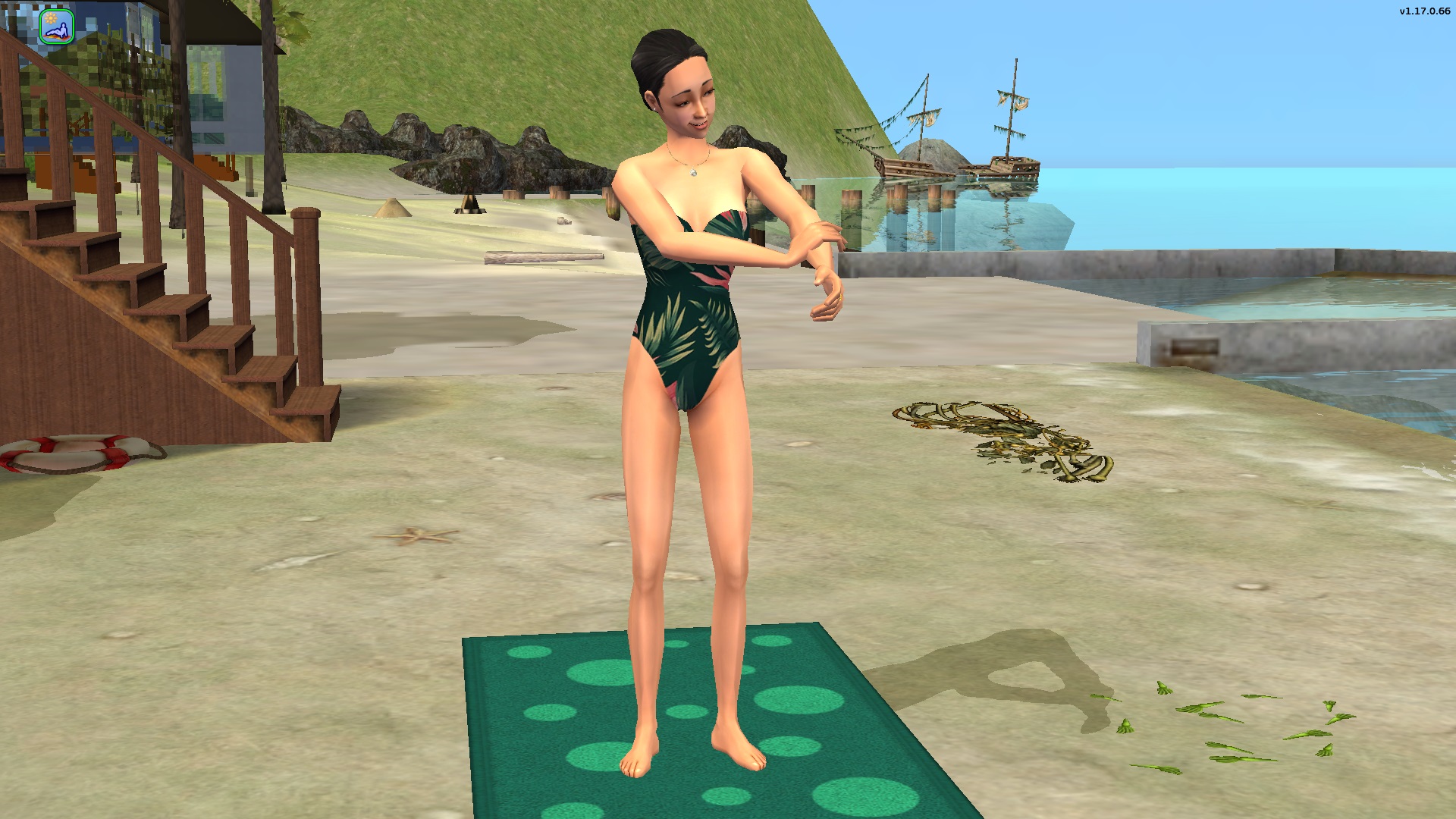 Created by simler90
View Policy / About Me View all Downloads
Uploaded: 29th Aug 2020 at 6:51 AM
Updated: 1st Sep 2020 at 11:06 AM
There are a number of separate mods and fixes on this page related to beach interactions.

Suntan Sunburn Fix: In an unmodded game, there is a Maxis oversight that can leave sims with a permanent suntan/sunburn from the sunbathing interaction. What is supposed to happen is that a proper suntan should last 4 days, and a sunburn should last 24 hours. However, when it is time to remove the suntan/sunburn, there is a very high likelihood that the game fails at removing the overlay, but it still removes the suntan/sunburn tokens that the sim has, which leaves the sim with a permanent overlay which is not possible to get rid of. This mod fixes this issue. Note that the suntan/sunburn features from sunbathing have nothing to do with the hot and cold overlays from Seasons which are applied and removed properly by the game whenever a sim's temperature becomes extreme and is normalized. A suntan/sunburn overlay can combine with the hot/cold overlays from Seasons, they are completely separate from each other.

Sunbathe Mod: In an unmodded game, only family members can get a suntan/sunburn from sunbathing. This mod makes it so that unselectable sims can also get a suntan/sunburn. In addition, I have made it so that sims always have a chance to get a suntan/sunburn from sunbathing during summer, but if it is not summer, then the outside temperature needs to be at least hot, and the chance is lower. Also, tropical vacation locals have a very low chance of getting sunburned from sunbathing. Finally, when a vacation local finishes sunbathing, the game will put them back into their everyday clothes, which Maxis forgot to do.
UPDATE 1: The game was unable to make vacation locals switch back into their everyday clothes before this update. This has been fixed.
UPDATE 2: I just found out that the game doesn't allow visitors to autonomously sunbathe on a beach on liveable and community lots. They are only allowed to sunbathe on hotel home points and OFB home businesses. This update fixes that, you should now see sims sunbathing on any lot.

Beach Share Discovery Mod: This mod makes it so that sims can only initiate the Share Discovery Story interaction on beach collectibles if they were the person who found the item on the beach during the Comb for Seashells interaction. This mod also allows Vacation Pals to discover these items, because in an unmodded game, only household sims can find beach collectibles. I also made it so that non-household sims can experience all the potential animations and results of the Comb for Seashells interaction, which also includes getting pinched by a crab. In an unmodded game, only household sims can witness these events. Finally, if a sim gets pinched by a crab, their comfort motive will be decreased. One thing you need to keep in mind is that, when you have this mod, nobody will be able to initiate the Share Discovery Story interaction on any beach collectible that had already been found before you downloaded the mod. You will have to delete them and find new ones.

Beach Comb for Seashells Motive Fix: There is a little problem with the Comb for Seashells interaction. The game is supposed to increase the sim's fun motive slowly as they search on the beach, but instead increases their Chew/Scratch motive, which doesn't do anything, because humans don't have that motive. This mod fixes that.

For a full list of packs with names, see the Packs Needed popup.
Other Information
Type:
– Fixed: Fixed Maxis Mistakes
– Global Mods: Mods that change the way the game works without requiring any user intervention.
Tags