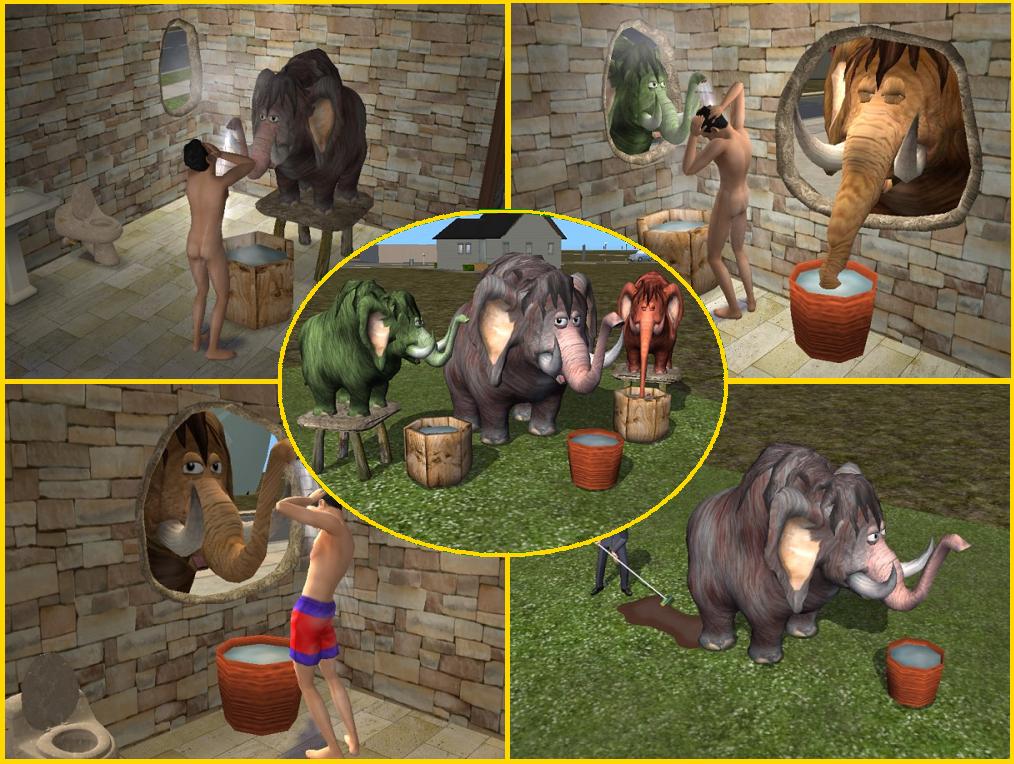 6,034 Downloads 1,250 Thanks  Thanks 58 Favourited 183,643 Views
Picked Upload!   This is a picked upload! It showcases some of the best talent and creativity available on MTS and in the community.

Created by The Mod Squad
View Policy / About Me View all Downloads
Uploaded: 21st Jul 2006 at 7:05 PM
Updated: 8th Sep 2006 at 9:29 PM - Minor tweak for the outdoor shower
The Mod Squad would like to proudly announce our new set which has been posted here, with over 100 new meshes and recolors!

are a bit less frequent...
(both the "swimwear" and the "naked" versions have been updated)

This is our teaser piece for you all. The SimStone Mammoth Outdoor Shower!

- Idle animations: the mammoths move the eyes and - every now and then - move the nose to sip some water; obviously, drinking so much water during the day causes occasional "wet surprises" from the... back end
Keep a mop at hand!
PS: keep the game volume up, to enjoy the funny sounds that come with the animations

- Placement: both mammoths can be placed outside a house, with their head passing through a window; placed this way, they can be used as indoor shower, while not taking the whole space of the bathroom (hey, they are mammoths, after all! ) - The Simstone "Hole in the Wall" windows are specifically designed for the purpose. (coming soon!)

- Dress changing: the big mammoth, as said, is intended to be an outdoor shower; therefore, the sims will change to swimwear (and not naked) while showering. The smaller mammoth (coming soon!) is a normal indoor shower, and the sims will shower naked.

- Game Compatibility: both mammoth showers are compatible with any game configuration.

- Recolours: the mammoths are separately recolourable; each package contains its own textures. Three additional recolours are provided (in separate download): green, grey-brown and reddish brown.

This is a group account for our creations. Please do NOT PM this account, your mails will be unanswered. Post questions in the threads, if you have them, or contact some of the creators directly.

You may use our creations in your creations on MTS2 alone. For any other use, you must contact the individual who made the item.