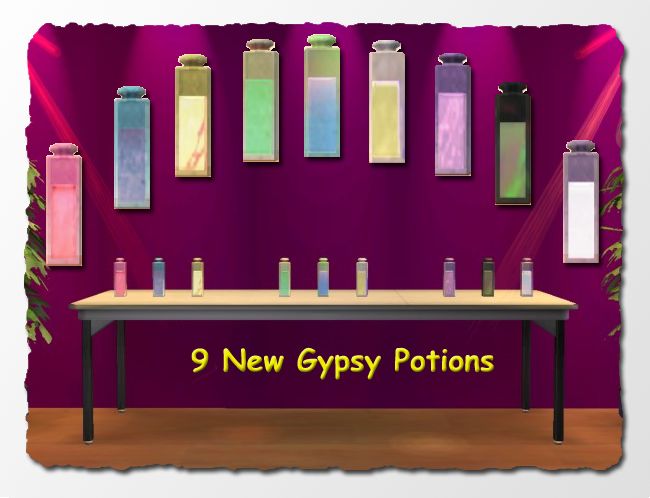 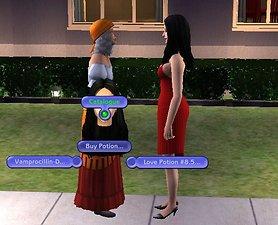 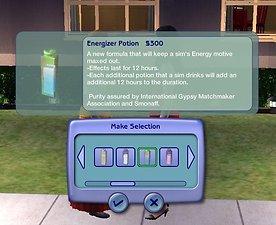 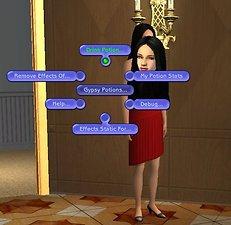 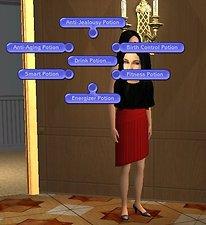 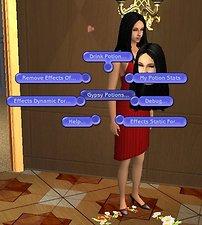 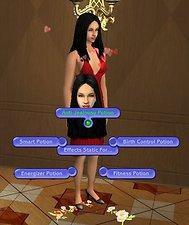 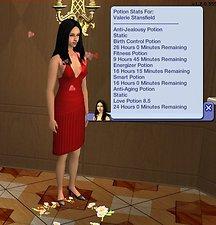 99,682 Downloads 2,265 Thanks  Thanks 378 Favourited 369,450 Views
Picked Upload!   This is a picked upload! It showcases some of the best talent and creativity available on MTS and in the community.

Created by Smonaff View all Downloads

Update 04-24-07:
Fixed the bug that was causing the "Debug - Social DL Test" option to appear in the pie menus of certain sims. Thanks to kabikat for alerting me about this.

Enabled the following options for when you click on a non-active sim.
-Effects Static For...
-Effects Dynamic For..
-Remove Effects Of...

These options were previously only available when clicking on the active sim. This will eliminate the need to make visitors or NPCs selectable just so you can make the effects of a potion they have used static/dynamic or remove the effects altogether. I find this very useful with the Anti-Jealousy potion.
Note: The sim has to have used at least one potion before these options will appear.

Tweaked a couple of things in the Jealousy Check package.

This update only effects the Main_Controller.zip and Anti_Jealousy_Potion.zip files. To install this update just extract the contents of those two files to your downloads folder and allow the new files to overwrite the old ones.

Update 04-10-07
Changed the method that the 'Test For Pregnancy' function uses to see if Inteenimater is installed. The way the old method worked was to check only once to see if Inteenimater was installed, while the new method checks everytime the 'Try For Baby' action is selected, which will eliminate problems which could occur if you either install or uninstall Inteenimater at a later date. As with the previous update this one only effects the 'Pregnancy_Related_Potions.zip' and 'RandomSterilityBarrennessOption.zip' files.

Update 04-08-07:
Tracked down and fixed the "jump bug" that was preventing sims from being able to woohoo when in bed, car, etc...
Also added compatibility for the Seasons version of Inteenimater.
This update only effects the 'Pregnancy_Related_Potions.zip' and 'RandomSterilityBarrennessOption.zip' files.

Update 02-07-07:
Added a random sterility/barrenness feature.
How it works:
Anytime that 2 sims 'Try For Baby', a test is performed on both sims to see if they will become sterile or barren. The chance for each of becoming sterile or barren is 0.8% or 1 chance in 125.
Note: Woohooing does not cause the test to be performed unless you are using a 'Risky Woohoo' hack, and then only when the Risky Woohoo determines that a pregnancy should result.
If you have the Gypsy Potions Main Controller installed then by using the Debug Option you can set or remove sterility or barrenness.

Update 12-18-06:
1. Fixed a problem with the Smart Potion where a sim could potentially be left with a negative IQ when the effects of the potion wear off.
2. Fixed a problem that would cause the Anti-Jealousy Controller to throw a "Transition to node that does not exist" error.
This update only effects the Smart and Anti-Jealousy potions, so only the files pertaining to them need be redownloaded.

Changes
-Potions should now be able to be placed on OFB shelves.
-Potion effects can be set to either dynamic or static, dynamic is the default. Thanks to Sadie79 for suggesting this feature.
-Selecting potions to buy now uses the same type of catalogue menu as buying a magazine or video game.
-Potion stats are now displayed in a single dialog box instead of seperate dialog boxes for each potion.
-Fixed a problem where when talking to a sim on the phone that sim's potion effects would decay.
-All potions are also available from the buy mode catalogue.
-You can now download only the potions that you want with the exception of the pregnancy related potions.
-Added option to stop vampires from becoming pregnant.
-Added option to allow zombies to get pregnant.
-Potion Stats will now display the time remaining for the effects of Love Potion 8.5.
-Added a debug option to the controller. (see below for description)
-The Fertility Potion will slightly increase the odds of having twins.
-And several other minor fixes and tweaks.

Also new is the Invirility Potion which was requested by VioletSky. It is included in the Pregnancy Related Potions.

Each time you enter a lot the Main Controller will run a scan to see if any potions have been added to or removed from your downloads folder. For each new potion that it finds it will create a new instance of that potion and place it off world to be used as reference.

Debug Options:
Reset Controller - This can be used to rescan for available potions if for some reason one or more of the potions that the controller uses for reference are deleted. You'll know you need to use this option if for instance you select 'drink potion' and one or more of the options that are displayed in the pie menu refer to something other than a potion.

Show/Hide Pregnancy Test % - Displays the percent chance for becoming pregnant that is determined by various factors such as a sim's gender, their partner's gender and what pregnancy related potions they have used. When enabled will display right after the try for baby interaction or sometimes after the woohoo interaction if using a risky woohoo mod.

Show/Hide Pregnancy Test Messages - Displays reason that a sim can't get pregnant, such as they're a zombie or family. When enabled displays as soon as the cursor hovers over the non-active sim when two sims are using an object such as a bed.

I don't have Pets at this time so I need testers to let me know if everything works ok with it.

When installing to your downloads folder allow all files to overwrite the old ones if you have a previous version installed.

Overview
Included in this mod are ten new potions that will modify or add to various aspects of gameplay. Each potion can be purchased from the Gypsy Matchmaker and can be used in the same manner as the Love Potion, either from inventory or by clicking on the potion's bottle if not in a sim's inventory.
Give To is an additional feature, which is available by clicking on the potion's
bottle, and allows you to select the sim you want to drink the potion. This
additional feature is good for having sims that you normally wouldn't be able to
control without a selectability cheat, drink the potion. Can be used on community lots (from inventory)and can be given to NPCs. Potions may be used even if the effects of a previously used potion of the same type are still in effect, doing so will add to the duration of the effects.

If you have the Period Hack installed and you would like for sims that are having
their period to not get pregnant then download and install the Optional_PeriodNoPregnancy file.

If you only want sims that are married, engaged or going steady to be jealous then download and install the Optional_JealousyForMarried file.

Installation
Place all the package files in your downloads folder.
(My Documents\EA Games\The Sims 2\Downloads)

Note: If you have previously installed my No Jealousy Unless Married/Engaged/Going Steady hack, then when copying the extracted files to your downloads folder allow the file Smonaff_JealousyCheck.package to overwrite the old one. If you want to still have the functionality of that hack then you need to download the file Optional_JealousyForMarried.zip

Compatiblity
-Nightlife is required.
-Will conflict with any other anti-jealousy hacks.
-Works with or without Inteenimater . It does however override Inteenimater's test for pregnancy, this only effects the fertility treatment feature of Inteenimater and all other features of Inteenimater shouldn't be affected.
-Also it should be compatible with most Risky Woohoo and Swinger Bed hacks.
-Testers have reported that it works with OFB. Thank You for your feedback.

For more information read the user guide I have included.
Other Information