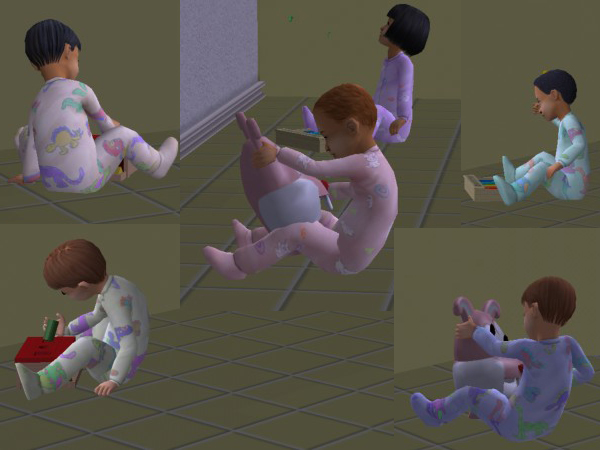 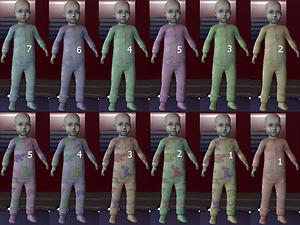 Please download the dino & sheep FIX files at the BOTTOM of the list. (Look for the fixed files for my other toddler outfits too.) ((Thanks to Sausage for pointing out where I had gone wrong!))

My sextuplets needed different colored pajamas. (I had a hard time telling them apart in sleepwear.) These were made in a custom content free environment on a computer with just the base game. (Previously, the outfits would show up randomly on the toddlers, but not be a choice in CAS. Now they work as they should.)

FIX-dino & FIX-sheep (at the BOTTOM of the list) are the complete sets for each type - color codes shown on the bodyshop pictures...I had added the red dino (number6) later because I wanted a red one, and I had to try and match the color as best I could as I did not have that original file anymore.

Archive Information
This is a Maxis Recolour which means that it is a recolour of an item that already exists in your game. Please check the Expansion pack requirements to see which game pack it recolours.
Archive: FIX-dino.rar
File: 7f5d1636_cianeppdino2grn.package Clothing Recolour

Also Thanked - Users who thanked this download also thanked:
-Disney Babies- PJs and Diapers!
by Phaenoh
4 cute ☆tokidoki☆ PJ's for toddlers
by ganguro
Kids for All Seasons (24 Outfits- no EP or Meshes Required)
by kalynn06
FIXED Toddler Clothing - REDONE in base game
by Ciane
-3 Optional Defaults- 30 Pairs of Toddler Undies with Shirt and Socks in 10 colors!
by Phaenoh
"Baby-boom" - clothes for toddlers
by Margierytka
Little Hoodlums Collection for Toddlers
by fakepeeps7
Fleece Pajamas for Toddlers - Recolours
by fakepeeps7
Toddler Onesies Set
by HystericalParoxysm
Set of 13 outfits for the kids
by migamoo