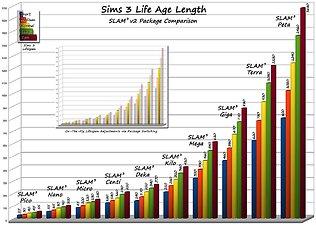 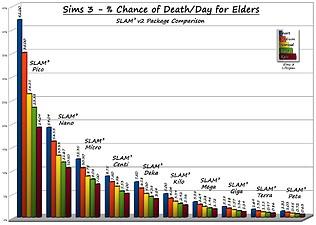 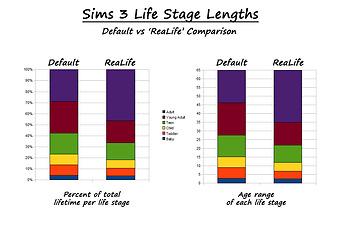 After dozens of hours of effort, sweat, and tears.. version 2 is here!

SLAM provides an improved and more personalized range of lifespan aging selections for The Sims 3. No longer are you stuck with a limited number of choices for your sims' lifespans, forcing you to play faster or slower than you'd like. It also allows nearly infinite adjustment to your sims aging on-the-fly that were not possible before.

There are two optional components for SLAM that you can use to enhance your gaming experience:These options are included in separate sets of SLAM packages in different folders. Pick your desired options first, then locate the file with the correct name (options are listed in each).

In SLAM version 2, you have ten different types of aging to choose from for your sims, each comes with it's own set of in-game values for the Lifespan slider (in the game's options area). Each package is codenamed to help differentiate them from Sims 3 game and slider setting names, avoiding possible confusion. SLAM packages range from Pico (the fastest package with shortest lifespans) to Peta (for sims who live nearly forever):
These aging schemes are improvements over the original Sims 3 defaults, in that they provide a greater selection for the player to choose from. They also have a smoother progression from the shortest setting (short), to the longest (epic). In version 2 of SLAM, the ranges within each package for Short-to-Epic slider settings were tightened, and additional packages added, to give even greater control and selection on aging speed.

Refer to the SLAM Graph that compares the different packages visually for a better idea of their durations, and for help in picking the right one for your game. Note: almost all packages were changed from their equivalents in version 1 of the mod. 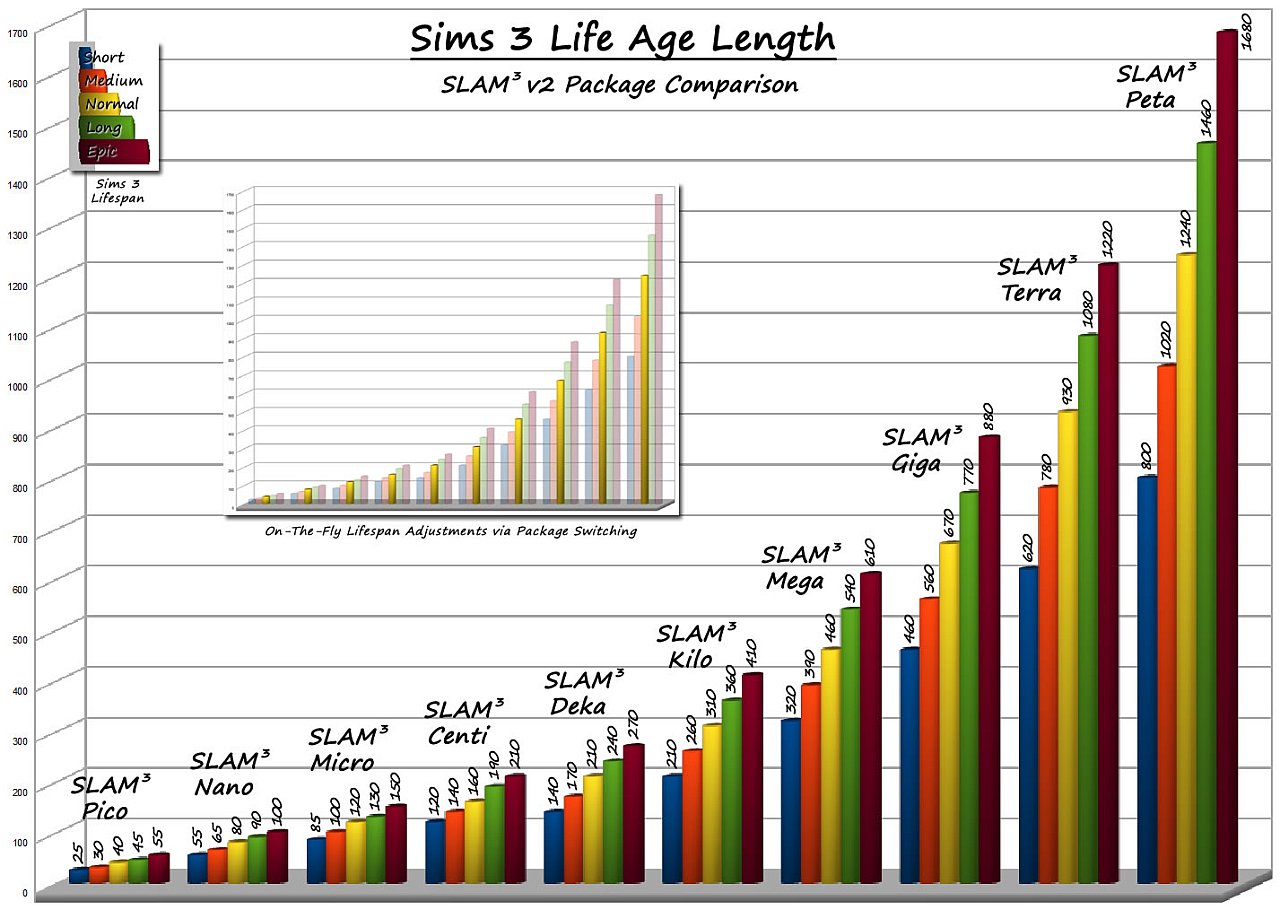 When picking a package to use with your game, you should end up installing only one. Multiple copies of different SLAM packages won't hurt your game, but you may not get the lifespan choices in the options area that you wanted.

The chances for Elderly to die each day (how TS3 determines when a sim dies) have been adjusted and updated for version 2, so that they are proportionate across all packages and slider settings. The original EA settings were scaled incorrectly for different Lifespan slider settings, resulting in skewed chances for death in short and long games. See the graph relating to the Elderly and chance of death for detailed information on how SLAM addresses and fixes this. 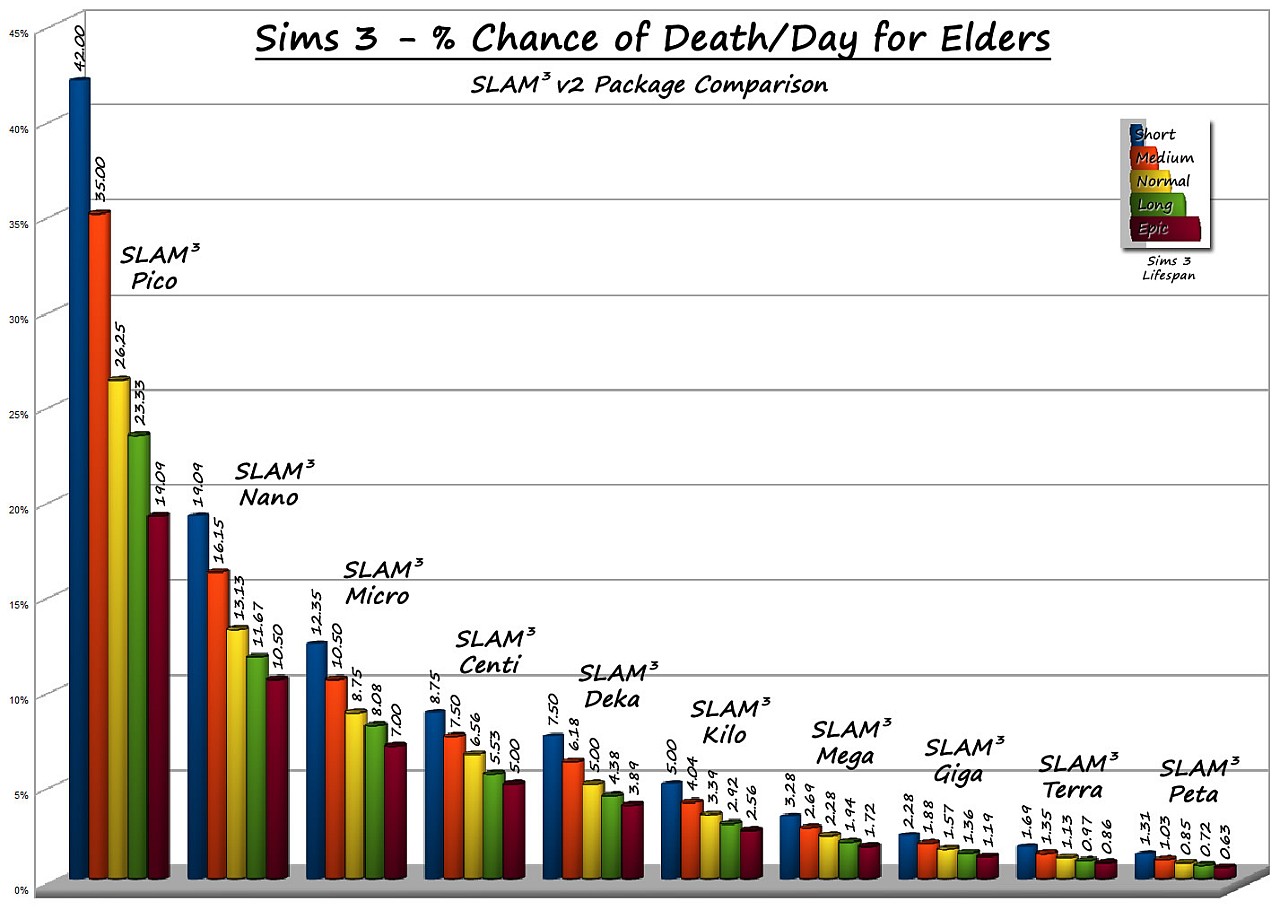 ReaLife, a new optional SLAM feature, can adjust the original and incorrect life stage lengths for sims to accurately reflect what we see in real life. No longer will your teens be “teens” until age 27, as EA would have us play them. See the graph detailing changes for ReaLife for more information on this recommended feature. 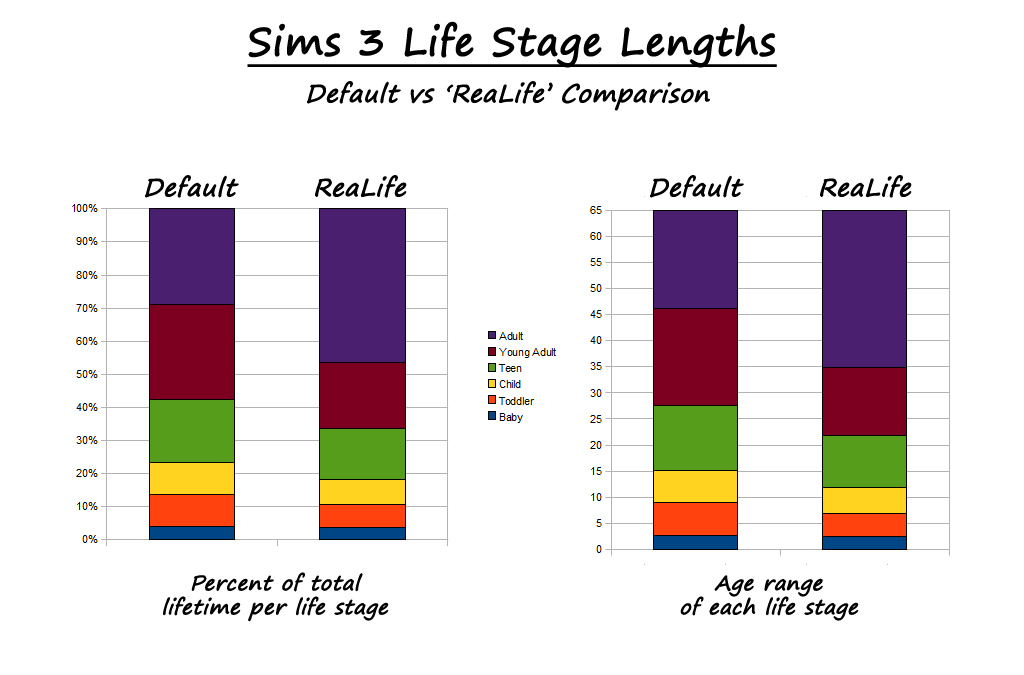 “Pick the version of SLAM that is best suited to your gameplay style.”
Most people will go for Deka (speed 5), the new equivalent of version 1's Classic. I've read many posts on the web about the majority of people selecting the default setting of 190 days (Long), since there was a lack of others, and 960 days is just too long for the casual gamer. Picking the SLAM package that is most closely suited to your play style is key.


“My sim is going to cross an age boundary before I'd like, and I want to delay it.”
You can easily do this with SLAM, without having to completely turn off aging in the game. Simply pick a slower package from SLAM (longer lifespan #) to use in place of your current one. Your sim's remaining time until they age up will be extended proportionately.

Example: You are using the Deka SLAM package, with a setting of Normal in-game for sim lifespan. A sim of yours is going to have a birthday in 7 days (sooner than you'd like), and you want to push that back a while. Save your game, exit out, remove your current SLAM .package file (basically uninstall the mod), and replace that with a slower version (like Kilo, Mega, or Giga). Those 7 days until your sim's birthday will turn into quite a few more, depending on which new package you chose, and you don't have to touch the Lifespan slider in the options area at all (it wouldn't help anyway). After your sim finally has their birthday, you can go back to their old lifespan by reversing this process – uninstall the newer SLAM package, and reinstall the original you had in.


“I'd like my sim to cross an age boundary a lot sooner.”
This works similarly to the tip posted above – you can speed up the time to a sim's next birthday by using a faster SLAM package in place of your current one, and then revert back to the original after they celebrate. Your sims no longer have to be stuck in their current ages and limited by the game's lifespan slider.


“I tried a particular lifespan speed, but don't like it and want a faster (or slower) one instead.”
This is an easy change, as it only requires you save your game, exit, and replace the current SLAM package with the one you'd rather have. If you need more or less time in the current lifespan stage (before you switch to the new overall lifespan speed), see the Trick mentioned above. Any SLAM package can be switched in or out at any time, to achieve whatever rate of aging you desire.


“Help! I used more than one type of SLAM lifespan package at once, and my sims aged faster/slower than I wanted.”
Doing this won't hurt your game, other than having the unintended side effect of having your sims age faster or slower than you desired. If you did so and saved your game, the only way to recover is to find an older savegame and reload. Otherwise, you only have the option of removing the unintentional second SLAM package, and going forward with your correct lifespan settings.


“Well pfft! None of the packages seems long enough for me!”
Take another look at the Epic slider setting in the Peta package, then look at the death chance per day that SLAM gives for that setting in the other chart. Then realize that sims can live up to 1/3 longer than the end of their adult lifespan. That puts the maximum age for a sim using Peta-Epic (and who eats no Life Fruit or Ambrosia) at around 2,240 sim days. If that is too short, its probably best you turn off aging in your game or edit the package file and input custom settings.

SLAM is compatible with all “core” mods, since they generally don't do XML or “tuning” tweaks to game settings. Mods like AwesomeMod, Indy Stone Story Progression Mod, etc. should all work fine with SLAM.

Other XML/tuning mods that make gameplay tweaks to the aging manager will not work with SLAM. A current known list of incompatibilities is:

If you find another mod that you believe is incompatible with SLAM, please do your best to test and investigate this before bringing it to our attention. We can review other mods, and consider them for merging with SLAM as optional packages for people to use.

Any feedback, bug reports, comments, suggestions, praise, etc can either be posted on the ModTheSims.info listing for SLAM, or sent directly to jagatelesin (at) gmail (dot) com.