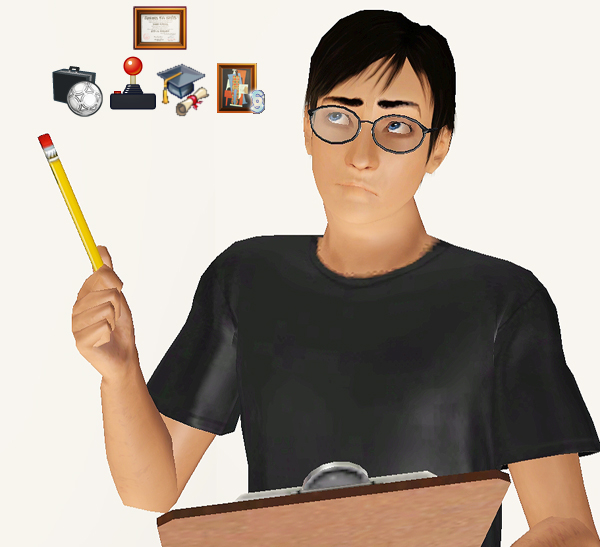 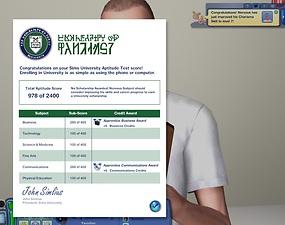 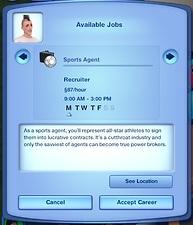 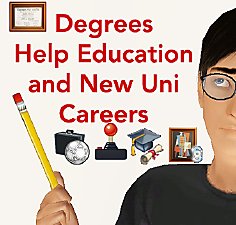 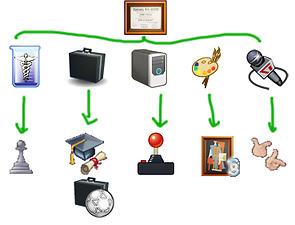 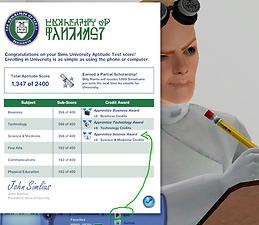 Charisma.jpg - width=900 height=711
With mod: SUAT score of Sim with 7 charisma as only skill.

Illustration.jpg - width=369 height=281
What metrics/careers that benefit are added for each major

32,866 Downloads 1,125 Thanks  Thanks 404 Favourited 137,638 Views
Picked Upload!   This is a picked upload! It showcases some of the best talent and creativity available on MTS and in the community.

**I suggest you get the version with the Game Developer career benefits removed as for some strange reason it causes glitches galore with only that career and no others. Weird.**

**Compatible with 1.55/Island Paradise** Oh, and FYI, I can't add any professions ala Ambitions or Showtime or add any custom careers. So the Lifeguard profession, as it is a profession, will also not be making it into this mod.


Like many of you, I'm sure, I was quite annoyed to not see the Education career on the list of careers that benefit from a degree. Absolutely ridiculous. So I went digging around through the XML files for University Life and to my pleasant surprise, these things were easily adjustable in XML files.

So, I made the Business degree count towards the Education career. I also found it annoying that three new careers were added, none of which benefited from a degree. So, I made the Technology degree help the Game Developer, the Fine Arts degree help the Art Appraiser, and the Business degree help the Sports Agent. It bothered me that logic didn't count towards the science and medicine degree, so I added logic to the skills which will improve your academic performance in science/medicine. 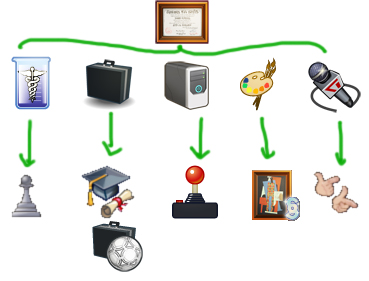 Just to make everything consistent, I added all of the above skills/careers to the determinations for the Sims Aptitude test. So charisma counts towards both business and communications degrees, which can seem a bit cheaty since it will raise your score in both, but meh, I think it's more realistic. Same is true of logic for technology and science/medicine. One of the attached pictures shows a sim with no other skills or relevant traits getting partial credit in business and communications for a charisma skill of 7.


FLAVOURS! ->Only one can be installed at once

Make PhysEd Matter: Adds the Criminal, Military, and Law Enforcement careers to the list of jobs PhysEd benefits. Adds Athletic aptitude benefit/skill metric to Technology major.
|-->PhysEd Note: These careers still benefit from their original degrees, having both (i.e. PhysEd and Tech for Military) does not stack the career advancement, you will start out at whichever level the degree with the higher GPA provides.

Combined Make PhysEd Matter + Writing/Photography are Art!: Does what is says on the tin.

Multiflavoured: (Combo of above +Education add to Communications degree)-> this is the one I use in my game, thanks for all the great flavour suggestions guys


These mods edit the AcademicDegrees and UniversityWelcomeKit+TakeAptitudeTest_0xf8baf6ed0a3abe78 XMLs and will conflict with any mod that edit the same XMLs. So this does conflict with Beccapixie10's Fewer (or More) Credit Hours For Degrees.

If you would like any flavours of this mod, just ask, they're pretty quick and easy to do. This is a VERY simple XML mod, so if you have any experience at all with S3PE, I encourage you to whip up your own version. In the .zip file the Degree and the Aptitude mod are separate, in case anyone only wants one. Although frankly they sort of go hand in hand so I can't imagine much of a reason someone would only want one. But there it is.

And of course, this requires University Life, but doesn't require any other expansion. Compatible with patch 1.50.