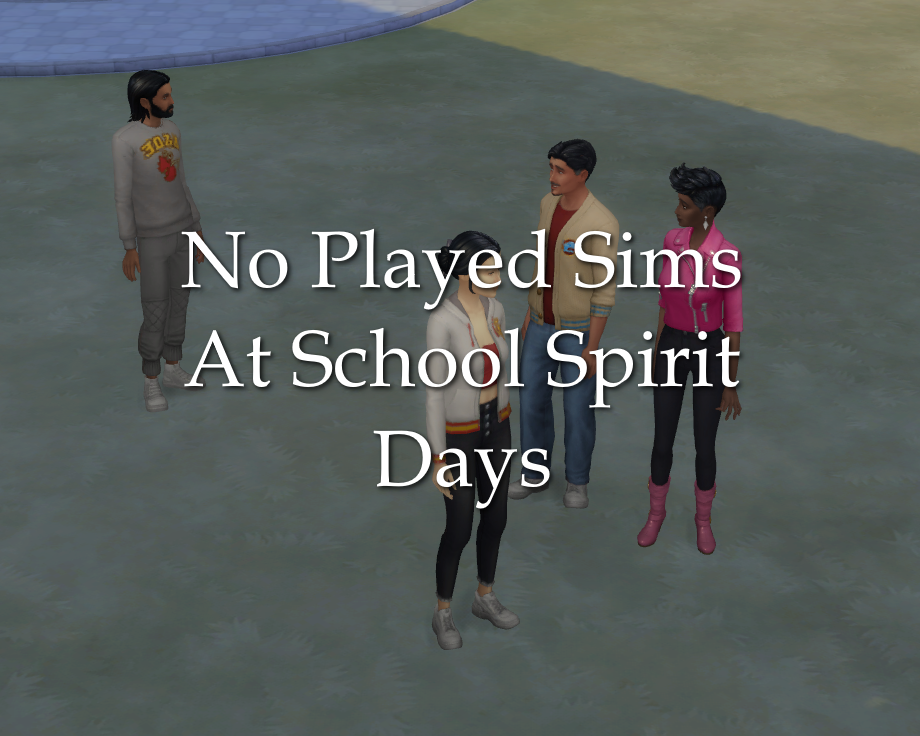 28 Thanks  Thanks     8 Favourited
Please note that this mod requires Discover University!
The other day, I was playing Sims. My daughter was enrolled in Foxbury and I always dread Fridays and Saturdays. Here's why: I have a Sim who's cold and calculating. He's at the top of the military career, he's evil, and an adult with a family. He has never been enrolled in university.

So why, every Friday, do I see him streaking down the campus?

It completely breaks my immersion when Sims I have a story for are running wildly down the sidewalk streaking or are cheering along with the Foxbury Cheer when they've never even been enrolled!

This mod stops that. The game will now only grab Sims that have never been played—ever. You'll no longer see your Sims here; instead, NPCs will be used.

Technical stuff: this is actually pretty simple. So, for these events (which are called Situations), the game grabs two different types of Sims. The first type is Sims who are actually enrolled in the Spirit Squad, which I didn't touch. The second are Sims that aren't even enrolled most of the time. You can tell who these are by the "Student" or "Party Goer" tooltips above their heads—they aren't actually students, they're random Sims.

Both of these types are assigned a "Situation Job" tuning file by the Situation tuning file. Therein, the game is coded to select Sims based on a filter, which is called a Sim Filter. The Sim Filter that was there for Sims in the "Student" Situation Job was just a general one for anyone who was a Young Adult or Adult. This mod changes that filter to one that serves the same function, but only for Sims who have never been played.

The same was done for the "Party Goer" Situation Job, used in Game Day situations (which is on Fridays).