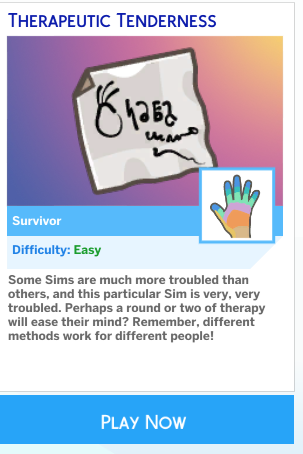 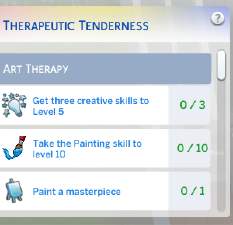 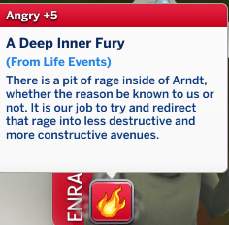 7,094 Downloads 111 Thanks  Thanks 24 Favourited 20,366 Views
Created by DaleRune
View all Downloads
Uploaded: 24th Nov 2021 at 7:49 PM
Updated: 5th Aug 2022 at 5:52 PM
Update 05/08/2022: It took completely starting it from scratch, but this scenario is finally at Mk 3 and should appear in the Scenarios menu again. In addition, the non-Triplis-requiring file has been restored! Hopefully Ntea will be happy about this?

Update 18/03/2022: Scenario is now updated to mark 2 to retain parity with the latest patch!
* Difficulty tag has been added.
* Icons have been updated.
* The 'A Deep Inner Offness' moodlet has been changed from Stressed to Scared.
* Art Therapy changes: the skill needed to go to level 10 is specifically Painting this time, to better engineer the masterpiece aspect. When you light the fire, the masterpiece you painted has to be in the Sim's inventory for the metaphor to work.
* Music Therapy changes: After writing the song, an additional goal has been added of "sharing it" - ie, licensing it via the mailbox.
* Wellness Therapy changes: Instead of four unique emotional surges, you need one positive surge and one negative. To keep the number of goals equal to each ending, an extra step has been added of completing the Inner Peace aspiration.
* Dance Therapy changes: renamed to Physical Therapy. In addition to the existing goals, one must also obtain the Energetic lifestyle (meaning that you need Snowy Escape as well).
* Dream Therapy has been completely retooled as Cognitive Behavioural Therapy. It still requires Triplis's thinking pack, but implemented in a different way - one now has to max out the Thinking Skill, successfully search for a mood, get through a subliminally-integrated dream in Get Famous's sleeping pod without interruption, and do enough journaling to get some positive memories.
* The secret ending is unaltered.

I know, I know; I'm very, very extra. But hopefully this is still as good at the other ones? It certainly has more endings than the other *counts* three: four visible, three invisible - or five visible, if you count the custom-custom one. Again, so as not to clog everything up in-game, the routes to getting the endings are listed in the drop-down, so be wary of spoilers!

Let me know if there's anything that I can add to make this more robust!

If Thinking Skill is installed, use the package file with Triplis in the name; otherwise, use the standard one.