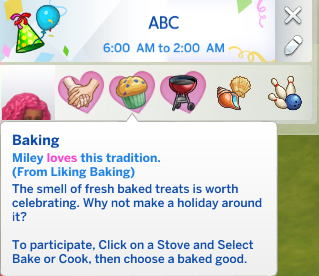 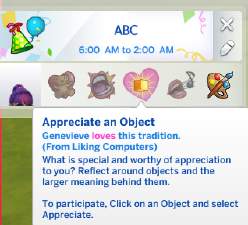 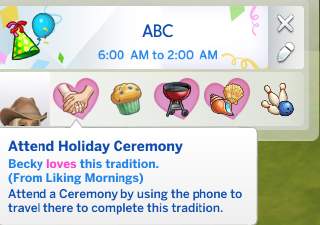 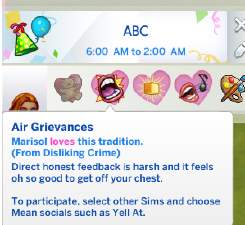 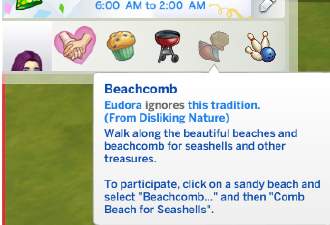 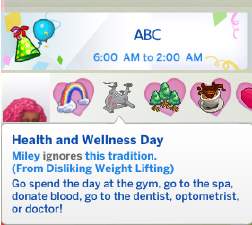 I opined the possibility of doing this version in the description of the previous mod, and enough people expressed interest that I decided to take the plunge and do so! So instead of relying on traits this time (beyond age-state traits, and the sexuality traits tied to the Celebrating Pride traditions before), these traditions rely on a Sim's likes and dislikes to see what they'll enjoy and what they won't. It isn't entirely straightforward: there are some traditions that those who dislike a thing love rather than liking a thing; and for others, there's an inbalance regarding which of the two extremes affect it. For instance, loving cooking will make you love the BBQ tradition, and disliking cooking will make you ignore it; however, if you dislike the beach, you can still participate in it alongside someone who loves the beach... if you see what I mean.

There are four package files in the .zip download, depending on what configuration of custom supplementary you have. Only put one in your main mods folder at a time.

The one that simply ends in _LikesDislikesEdition simply pairs non-custom likes and dislikes with non-custom traditions.

The one that contains +CustomTrads+CustomPrefs before the _ covers all of the custom content listed above!

Once again, if you have any custom preferences or traditions that you think this mod should cover, let me know however you deem appropriate! I'll be keeping it updated alongside the previous version, so any trads added to one will also be added to the other; don't worry about that.
Files Need help with downloading or installing content? Click here!