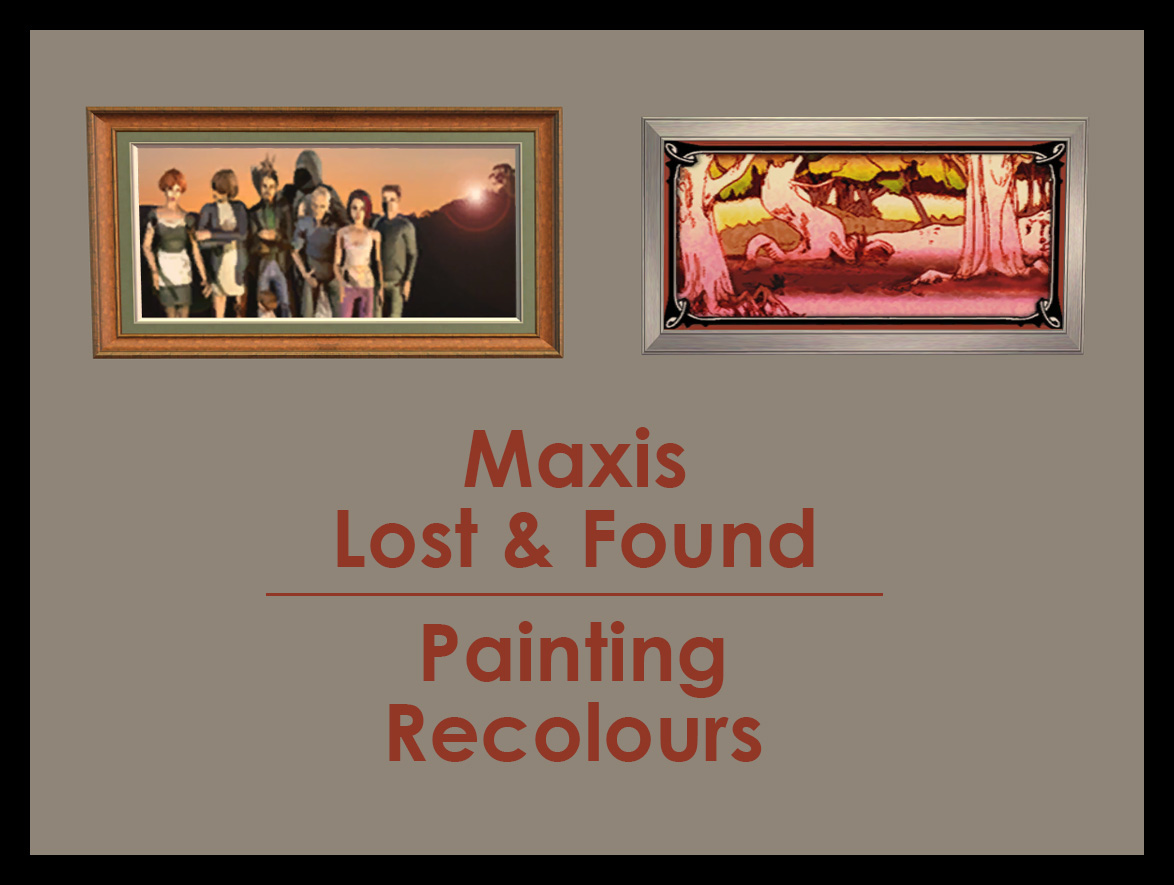 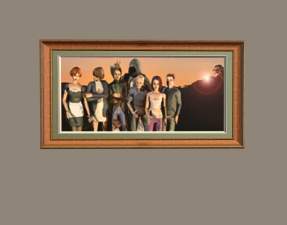 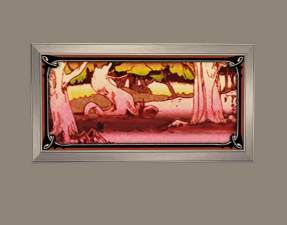 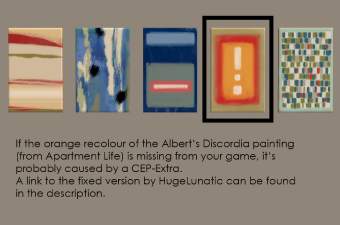 Update (2022-09-18):
I removed the redundant recolour and fixed the description accordingly. There is no need to redownload. For those who downloaded the orange version of Albert's Discordia: HugeLunatic fixed the CEP-Extra that caused it to disappear. So you can get that one instead and delete my recolour.

Original Post:
First things first, the group picture with the Grim Reaper was not found by me, but by Numenor.
It is one of my favourite Lost & Found objects to date because the Grim Reaper doing bunny ears for a photo is quite hilarious to me. In Numenor's upload this picture is part of a whole group of picture frames. And because sometimes I would like to hang the Grim Reaper picture separately from the others I made a recolour for an existing Maxis mesh.

Then I found unused textures in the game files for one other painting.

Edit (2022-09-18): Now you may wonder what that third painting is doing in the previews. To sum up: A CEP-Extra made the orange version of the painting Albert's Discordia disappear, I then "found" that orange version in the game files and wrongly identified it as a Lost & Found texture. In the end, HugeLunatic identified the problem and fixed it, you can find the fixed CEP-Extra here.
Many thanks to CatherineTCJD, greywolf3, simsample, and of course HugeLunatic for all their help with this!
For the sake of completeness I hid the original description (and its edits) for the Albert's Discordia Painting behind a spoiler tag instead of just deleting it.

Edit (2022-09-16): Now this last one is a special case. When I found it, I thought it looked awfully familiar. But I didn't have it in my game so I put it in this download as well. Turns out other people have it in their game. I decided to leave it up for anyone who is missing that colour option as well. But yeah, it's definitely not a Lost & Found item. Thanks to CatherineTCJD for pointing it out! Sorry about that! No clue what's wrong with my game.

If these have been found and uploaded before, I'm really sorry. It wasn't my intention to steal anyone's findings. I did google and looked through Pinterest boards to see whether they've been done before but I couldn't find anything. However, searching for Sims CC on the internet isn't always straightforward, so it's very likely that I've overlooked something.


Thanks to:
Other Information

You can include my stuff in lots or modify it but please give credit and don't upload it to paysites.
I would also be happy if you message me about your creation because I would love to check it out.