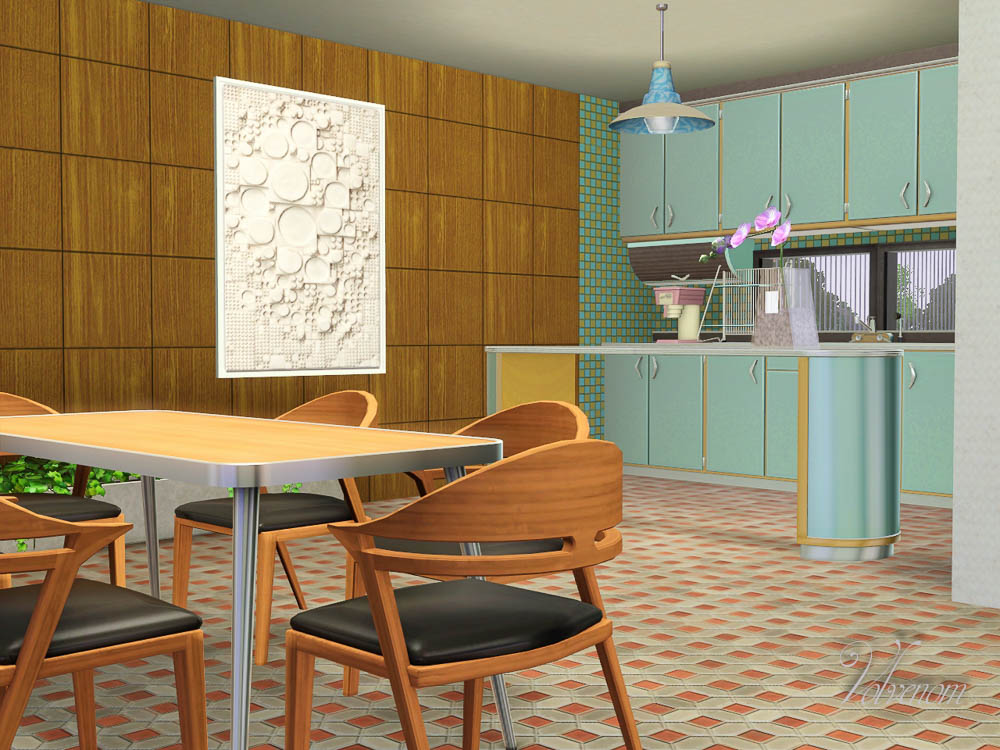 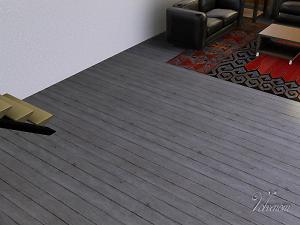 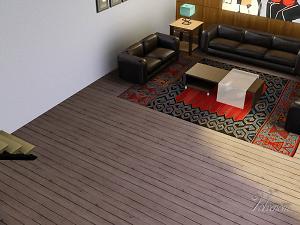 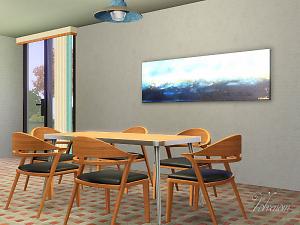 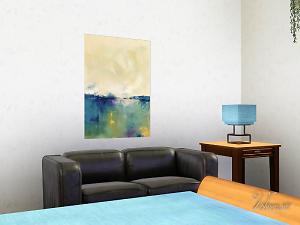 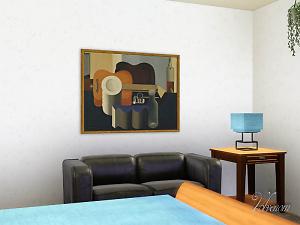 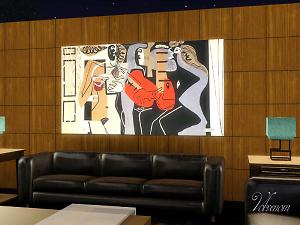 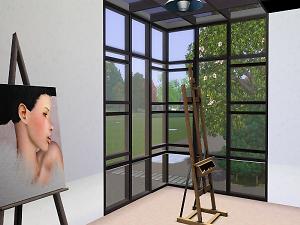 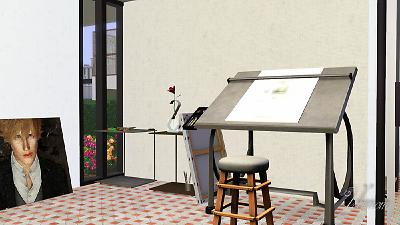 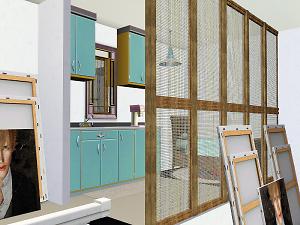 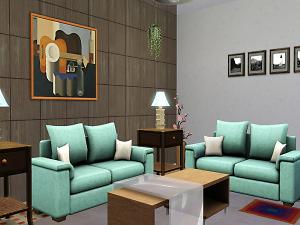 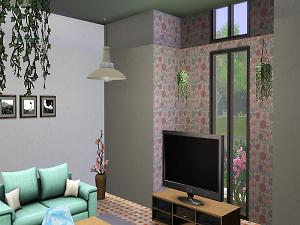 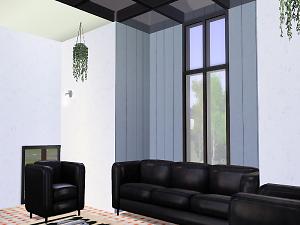 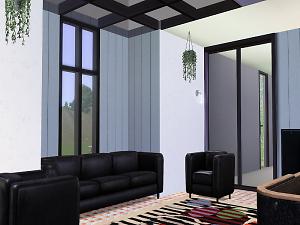 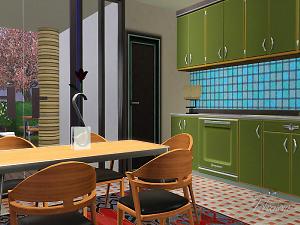 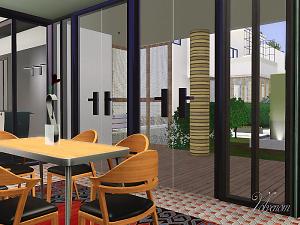 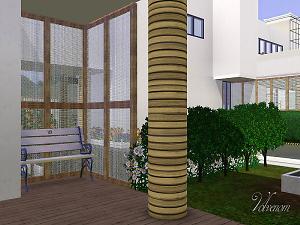 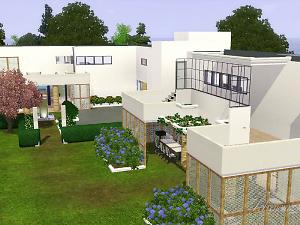 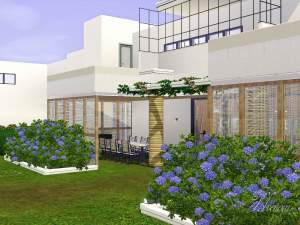 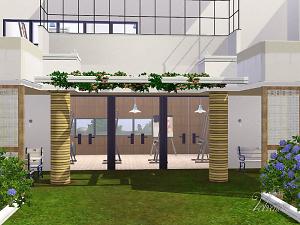 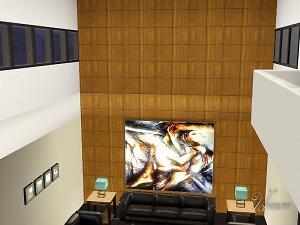 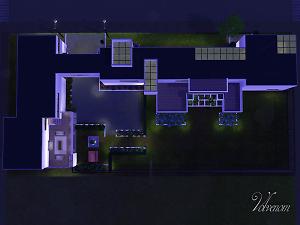 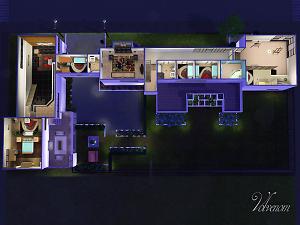 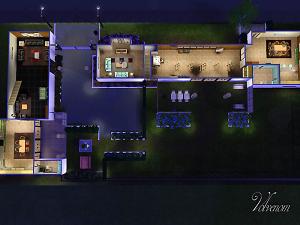 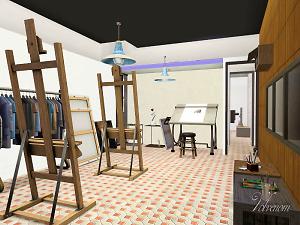 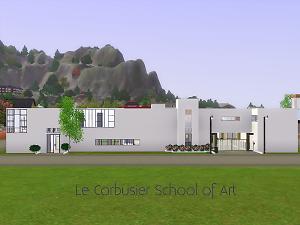 44 Thanks  Thanks     19 Favourited
Le Corbusier he called himself, he's a well known architect and painter in the minimalist functional style. His real name was Charles-Edouard Jeanneret-Gris. I visited one of his houses in Paris two years ago. This is not a copy it's just a study of his style.

Sometimes Villa La Roche in Paris was rather amusing with it's kitchen just being a strange tiny room with fixed fittings. I gave this school a full 1950's kitchen, after all we don't have butler's and often the kitchen is where the family likes to sit isn't it. 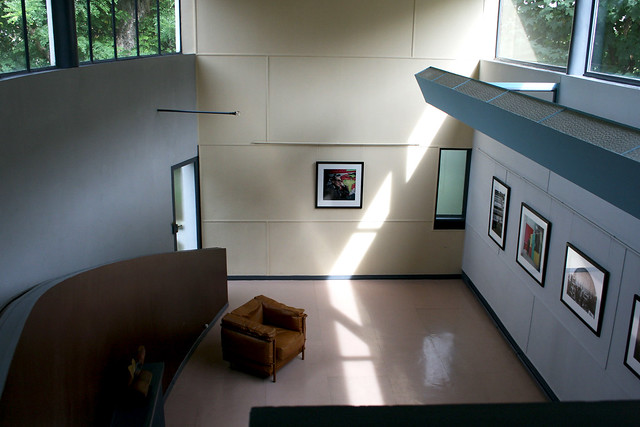 I learned a few things from his design. He has very little direct sunlight to where you sit. In rooms with windows it was usually small windows and he selected the location with much care. Like in this room it's his study or livingroom I don't remember. He has lights high on the wall, they lit up the room, but hopefully less intense. They added the strange ventilation shaft later on when the light still warmed intensly in summertime. Doesn't look like it helps a lot, but this is in september. The picture has been taken by me on my digital SLR.

Take a good look at the chair in the room, you have probably seen it before and yes, it's by LeCorbusier. If you don't remember, make it black leather and note the metal rods on it. 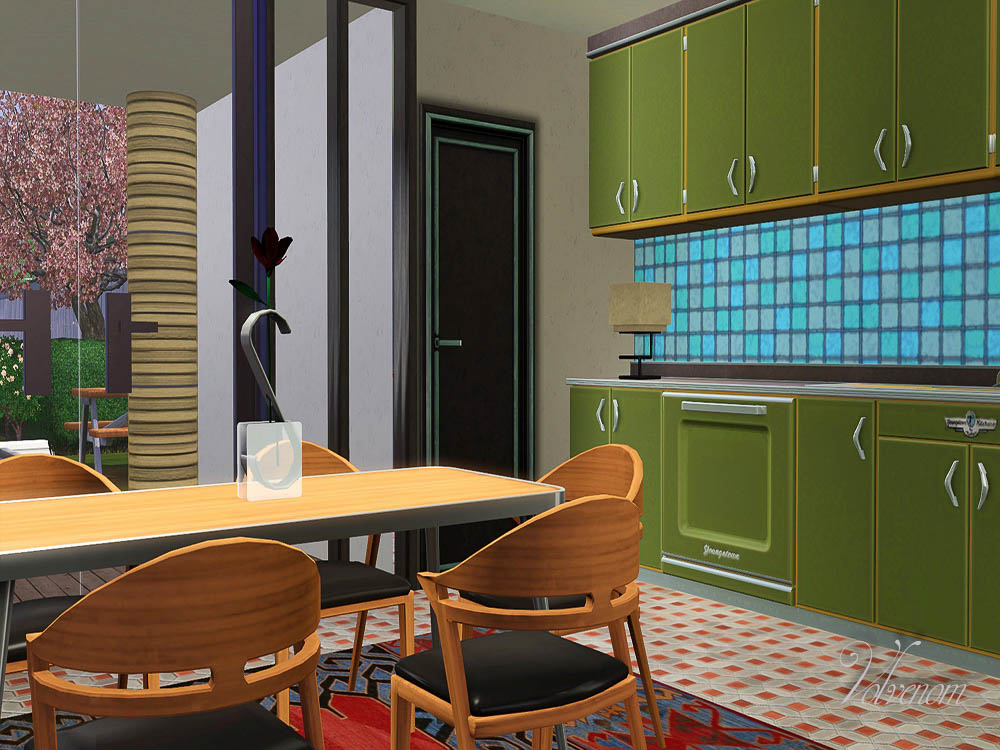 This is the family kitchen, it's a bit more muted than the students kitchenette. In the last minute I decided to introduce Ambitions because of the drawing table. 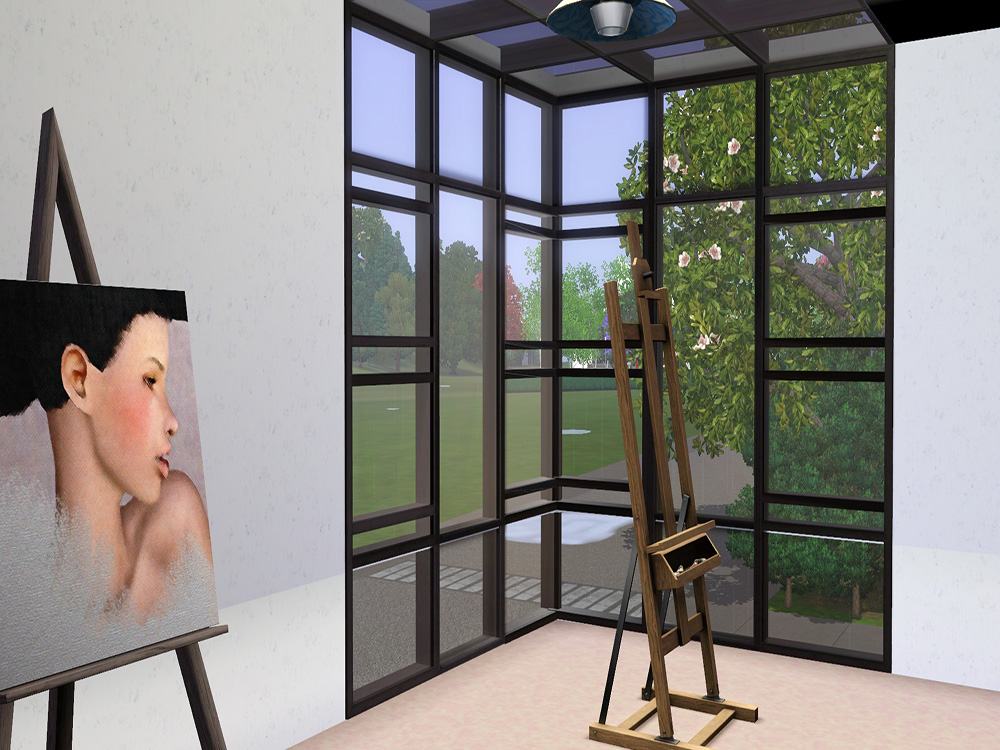 I gave it an artschool layout because it seemed like a good idea. It's zoned as residential, you can change it to artschool if you like, but you will lose the dishwasher and stove I think it is, if you do. When I introduced Ambitions I also put a washer and dryer in the family part of the house. 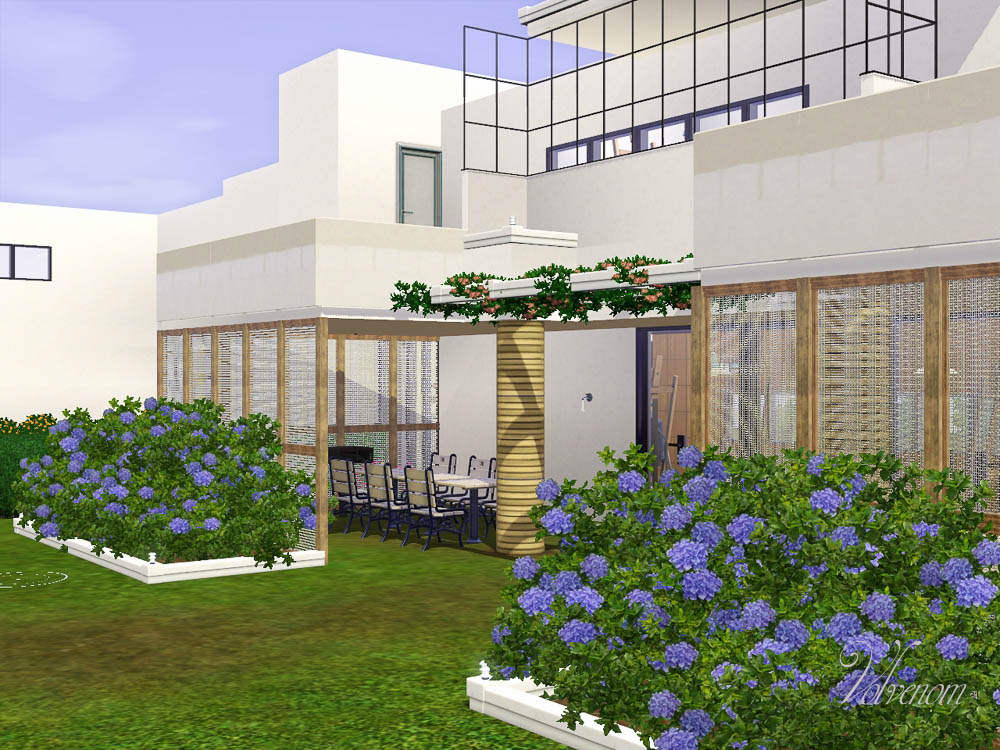 Floorplan:
Family part: The house has a master and a single bedroom, both ensuite, a big livingroom, and a family kitchen with a laundryroom in a corner.
The art school: 3 beds for students, and a bathroom in the hallway. The master studio has one bed for an exhausted master painter and a bathroom he/she can put a lock on if needed. The School has a big room with easels and a drawing table and sink, a kitchette again with bath, a TV room downstairs and gamesroom above.
Garden: it has a simple camping table for the family outside and the students has a basic grill with table and chairs. Good size lawn to take out the easels in good weather.

The video will be up when it's ready.

The house has a middle level built with cfe cheat. For that reason you shouldn't paint the ceilings in this house.

I tested with this kitchen from Buffsumm and didn't have the problems with glitching converting it to packagefiles, as I had with the other kitchens ... if you feel adventurous.

Needs to be downloaded:

riccinumbers:
- Urban Loft Artist Cove Part 1, I did NOT use the wall picture or working easel.
Download

B5Studios:
- Back to Basic, set of three types rugs in 3 sizes.
Download

My own files this time:

Notes: 1. One painting is not needed because of the lack of a propper thumbnail. If you don't mind just having to find it beside the original, looking like the original, you can leave out the picture by mylittlethesims3world.blogspot.no.
Notes: 2. I didn't use TSRW making these pictures and floor, it looks like they ended up being basegame.

Linda Donohue: Long Sea
Exp needed: Basegame
Linda Donohue: Colorful Abstact Seascape
Exp needed: It's made on Ambitions "SheSparkles", but I don't use that exp in this game until later, so probably not needed.
Permission given to glue on a mesh and upload for the game.

LeCorbusier: The Curated Object, wheel mesh from Pets with recolorable frame.
Exp needed: Pets? ... but I'm not using that exp for this game, so probably none.
LeCorbusier: no2, I haven't been able to find a name for this. I didn't include this in the house as it's missing it's thumbnail. It's still fully usable, it just needs a thumbnail to be included in the house me thinks.
Exp needed: ITF, built on the simcity big picture mesh, I'm not sure if it's required as it's made the same way as the others, but that exp is required for this house.
Permission: died 1965 http://no.wikipedia.org/wiki/Le_Corbusier.

1 Pattern
Old wood floor. It has 3 channels that seems to work nicely. Made with Delphy's pattern packager and photoshop. Base texture is just some random freebie download. This should be basegame.

If you need more info, see Game Help:Installing TS3 Packswiki for a full, detailed step-by-step guide!
Back to download view
5 Comments / Replies (Who?)