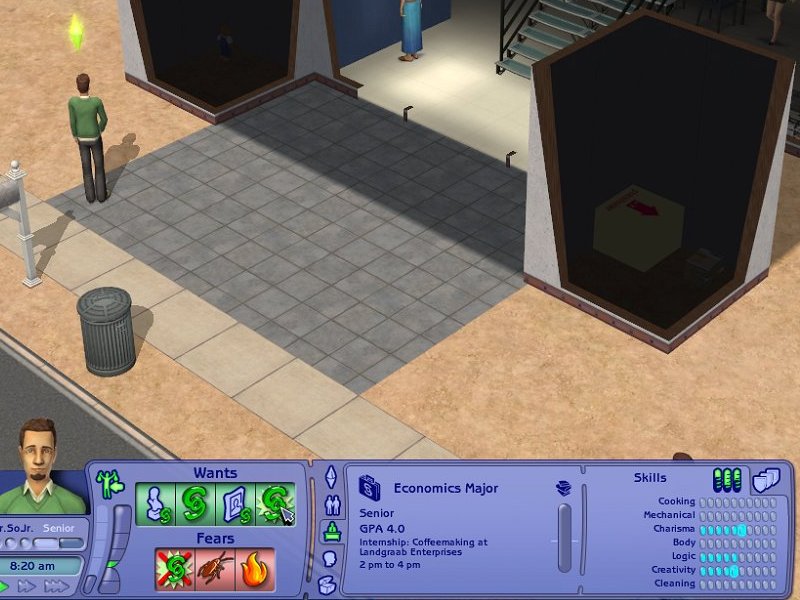 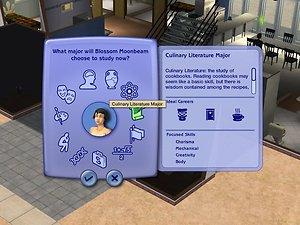 183 Downloads 73 Thanks  Thanks 2 Favourited 21,737 Views
Created by Cyjon
View Policy / About Me View all Downloads
Uploaded: 8th Oct 2006 at 1:13 AM
This mod completely revises the skill requirements of the original majors included with University. These majors REPLACE the old majors.

Each major now directly corresponds to a career path. Careers which have the same skill requirements (Athletics/Military and Business/Politics) share a major and Slacker has no associated major. In order to make the career-major links more logical, some of the majors have been renamed. The renamed majors have new descriptions but I have not changed the class names.

The majors correspond to the following careers:

Each major is built around a core skill. For sims taking the easy path (wanting only passing grades rather than A+ grades), they can focus on the core skill and ignore the others. The core skill will ultimately be studied to level 6 and the secondary skills to level 5 (if two secondary skills) or 4 (if three secondary skills). For example, if you wanted maximum grades in the Art major you will eventually need to study Creativity 6 plus Cooking/Mechanical/Charisma 4. For Economics you'll need Charisma 6 plus Logic/Creativity 5. This means that these new majors require roughly the same skill study time each semester as the old majors.

The core skills for each major are:

Note that the old majors required 20 total skill points, while the new ones require 16-18 points. In order to maintain the game semester skill requirements of 3 points (Freshman & Sophomore) or 2 points (Junior & Senior) I've repeated some skill requirements. For example, core skill requirements by semester are 1-2-3-4-5-5-6-6 so a skill level of 5 is required for BOTH semesters of your junior year, and 6 for both semesters of the senior year. So if you get a skill of 5 in the first junior semester, you've already met one of the two skill requirements for the second semester. If this makes no sense, just ignore it. You probably won't even notice it while playing. I mention it just to assure those who do notice it that it is working as designed.

There was one last goal I had in mind when I created these changes, and that is something that affects my style of play but probably won't affect you. So feel free to ignore this part. When I play university, I play only semester 2, 4, 6, and 8. I manually move students into these semester so, for example, incoming freshmen are immediately moved to semester 2. Once they take their final and move into semester 3, I move them into semester 4. This means the university takes 12 sim days instead of 24 which goes a long way to reducing the tedium. The point is, that for each full academic year (freshman, sophomore, etc.) the second semester skill requirements build on the first. When you meet the second semester requirements you will automatically meet the first. If this makes no sense, don't worry about it since it won't affect you unless you skip semesters like I do.

Existing students will automatically pick up the new skill requirements for whatever major they are in, which may leave them struggling particularly if they are already in their senior year. There is no way to grandfather in existing students and keep them on their old majors so either wait until you have a lull in the student population, use cheats to increase student skills to meet requirements (you can always swap points from another skill if the idea of "cheating" bothers you), or prepare to have the students pull a few all-nighters to catch up.

Note that I haven't touched undeclared, since none of my sims ever go undeclared (I select their career as soon as they are toddlers and I can see their personality - yes, I *am* a control freak). Also note that the game automatically pushes you into the Philosophy program at some point if you don't pick a semester. With these changes, that means it pushes you into "Fitness Philosophy", which doesn't really make much sense from a story point of view, but them's the breaks.

Requires University, but it doesn't matter what other EPs you have or don't have -- it will work with all or none of them.
This mod is a custom major. This means that you will need the MajorsMadeEasier mod by FrikaC installed in order to use the download in your game.
Files Need help with downloading or installing content? Click here!