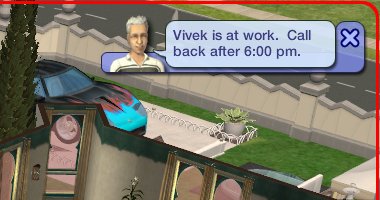 13,500 Downloads 2,128 Thanks  Thanks 238 Favourited 144,995 Views
Picked Upload!   This is a picked upload! It showcases some of the best talent and creativity available on MTS and in the community.
Created by Cyjon
View Policy / About Me View all Downloads
Uploaded: 9th Mar 2007 at 11:14 PM
Updated: 16th Sep 2008 at 5:55 PM - Uploaded Apartment Life compatible version
*** UPDATE 9/16/08 ***
Uploaded version compatible with Apartment Life - thanks to Qwigqwag for the resources I needed. Removed unsupported languages, making the package smaller.

Added Italian translations provided by raffo89 and fixed a typo in the Spanish version.

Uploaded a new version that adds Dutch translations provided by moonslave. No need to re-download unless you want the Dutch.

I just verified that this mod works as-is with Free Time. No need to re-download if you have the BV version.

Thanks to Sulphur this has now been updated for use with Bon Voyage. There is now only one version and it works will everything from base game only through Bon Voyage.

Thanks to carnifinda I've added French translations to all three versions. I also compressed the packages so they are 85% smaller than before.

All versions have been updated with Spanish translations (thank you, sebigut119). I realized that I had put the German translations only in the NL version, so I updated the other two versions to include them. No need to re-download unless you want the additional languages.

With the help of silverdreams, this mod has now been updated for Pets and Seasons! The -NL version works for any combination of expansions from Nightlife through Seasons.

With xZise's help it also includes German translations. I'm still looking for anyone who can update the strings I need in other languages.

There are now three versions: one for the base game, one for University, and one for Nightlife or OFB. I've tested both the base and NL/OFB versions and they definitely work.

There is no plan to update this for Pets or Seasons as I don't own those expansions.

Sorry, still no version for Pets or Seasons

This mod replaces the pointlessly nasty telephone messages with more courteous ones. It also adds the feature that when the sim you are calling isn't home because of work or school, it will tell you when they will return.

Apartment Life added a third reason people aren't home but since I don't have that EP I don't know what that is. You will get a "You've reached my answering machine..." message with no time in that case.

INSTALLATION: Unzip it and put the package file in your Downloads directory or any subdirectory under Downloads

COMPATIBILITY: Works with all versions from the base game through Apartment Life.

Please don't post this mod anywhere except MTS2. You are welcome to use my work in your own mods as long as you give me credit.
Files Need help with downloading or installing content? Click here!