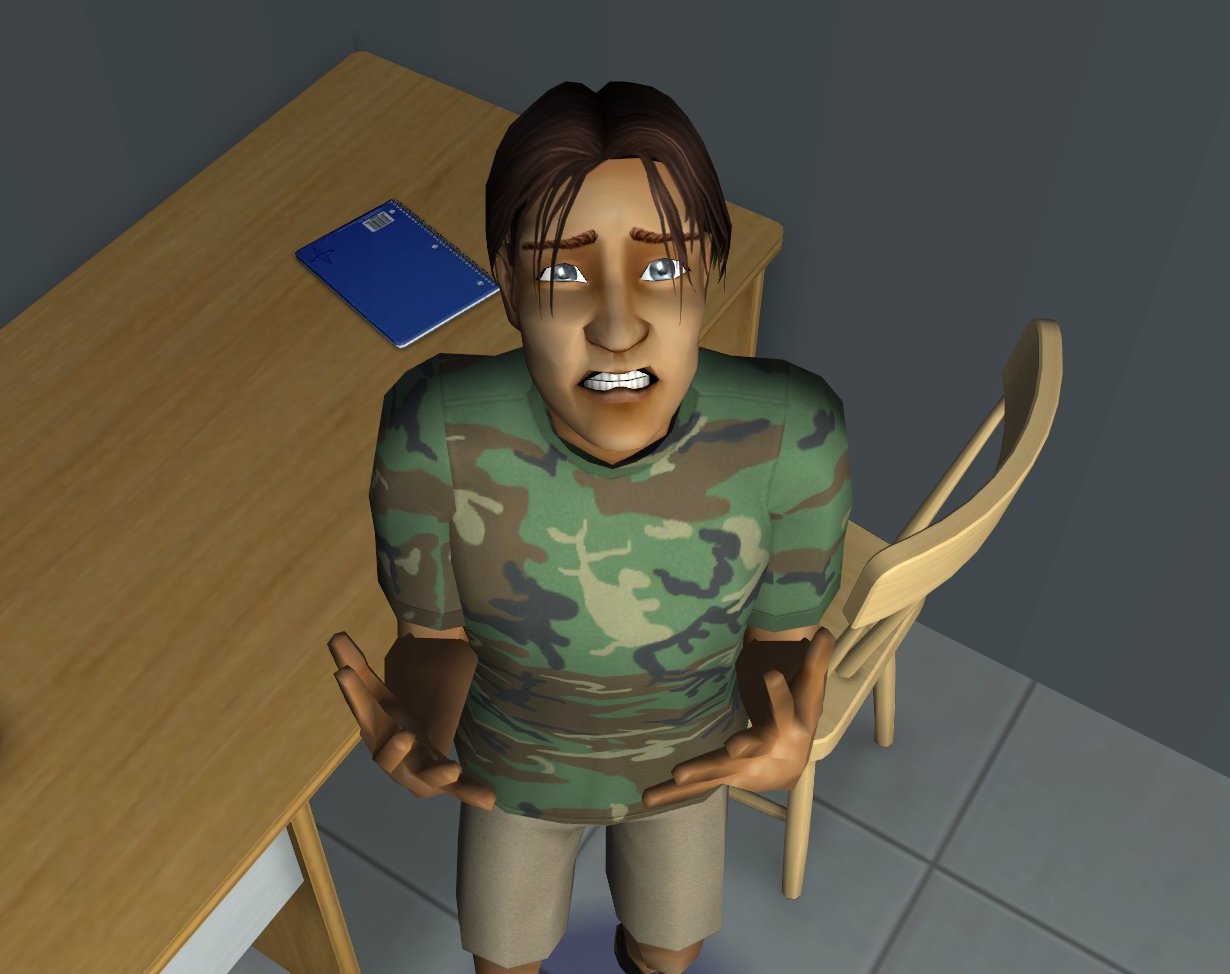 UPDATE 3/15/08
Released version 3, compatible with all game configurations from base game through FreeTime.

Contrary to what I claimed before, the old version was not completely compatible with BV. It worked, but apparently there is some vacation benefit that makes learning to study proceed faster. I never updated to include that until this version.

Since I know I checked it with hackdiff it means either A) there was a bug that EA fixed in one of the BV patches (I checked only the original package) or B) I'm a moron. Although B is quite likely, I'm going to choose to believe A

UPDATE 9/17/07
Released version 2, which adds a logic skill offset to playfulness. Version 2 works with all version of the game, from base game through Bon Voyage.

UPDATE 9/11/07
Per hackdiff, the Seasons version should work with Bon Voyage.

This mod makes homework more difficult, based on a sim's aspiration and playfulness. This affects only children and teens, not university homework.

Under the old system, a sim who had been taught to study would take about an hour to complete homework.

Under my system, only knowledge sims will still do homework at this speed. Romance and pleasure sims do homework at 1/3 normal speed, and all other sims (including children, since they don't have an aspiration) go at 2/3 speed.

Regardless of aspiration, sims get bored once they have done a percentage of homework equal to their seriousness (which is the reverse of playfulness). So a sim of playful 10 (serious 0) gets bored after 0%, or immediately. Playful 5 would be bored after completing 50% of the homework, and playful 0 (serious 10) will never get bored.

Playfulness is adjusted by logic skill. Every two points of logic adjusts playfulness by -1, so a student with logic 10 will effectively be 5 points less playful for this calculation.

Once a sim gets bored, homework speed is cut in half. That means 1/2 speed for knowledge sims, 1/6 for romance and pleasure, and 1/3 for everyone else. Yes, this means that a romance or pleasure sim with playfulness 10 will take SIX HOURS to do homework - in fact their rate is so low that neither learning to study nor getting help will lower this time due to rounding.

The Seasons version takes into account the season and juicer bonuses. It also corrects what I'm assuming was an error that allowed students to learn to study faster all the time and not just in the fall.

Let's look at an example that assumes you are also using Partial Homework Credit. If several sims spent the same amount of time on homework, here is how their grades would vary by personality. You can see that romance and pleasure sims have a tough time in school.

INSTALLATION: Unzip it and put the package file in your Downloads directory or any subdirectory under Downloads. Be sure to delete any old version of this mod if you are upgrading. I changed the name with the Seasons version so if updating from a pre-Seasons version it won't overwrite the old one automatically.

This mod can be used as a standalone mod, but works better when used with my Partial Homework Credit mod.

KNOWN BUGS & CONFLICTS:
* Can be used with Inge Jones school desk, but won't affect how that homework is done. She creates her own homework object that uses its own internal routines.
* Works with twojeff's School Bus - Bring Friend dialog
* Does not work with Homework Sometimes (either Jenflower's original or twojeff's updated)

Please don't post this mod anywhere except MTS2. You are welcome to use my work in your own mods as long as you give me credit.

Thanks go to the SimPE team (including the oft-overlooked Peter Jones) plus special thanks to:
* syberspunk - his Harder Harder Grades mod was an inspiration for this
* Smonaff - helped me get a Seasons version out before I had that EP
* klmfrigate - came up with the idea of having logic offset playfulness
Files Need help with downloading or installing content? Click here!